Secrets of the pirate island of La Tortuga 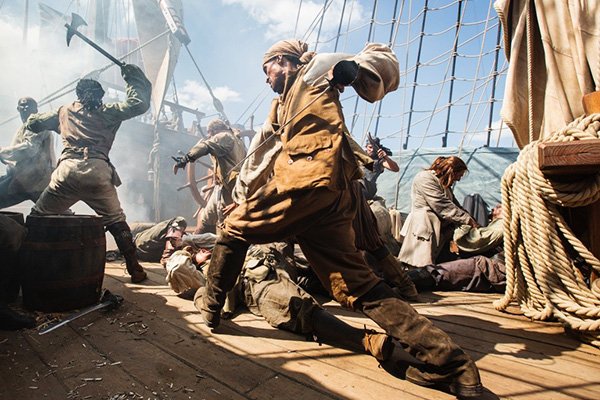 La Tortuga is the second largest Venezuelan island (about 24 by 10 kilometers). Covered with a bush, devoid of fresh water, it remained deserted for a long time (even a mammal could not get caught there). Everything changed European policy: in 1597, Spain closed the rebels against its King of Netherlands access to the sea salt of Portuguese ports – and without it the salted herring trade with the Baltic countries that brought profitable profits stopped. The Dutch decided to send convoys (cargo ships escorted by the military) to the salt marshes of New Andalusia, but in 1605 the Portuguese fleet burned and captured all the ships of the northern “offenders”.

On the deserted island, the Dutch drew attention by accident. In the 17th century, having seized the Portuguese northeast Brazil (with sugar plantations) for several decades, they used salt transport vehicles (zoutvaerders) to transfer soldiers and military cargoes to the New World. To ensure that ships did not return empty, their captains were ordered to load salt on the islands of Bonaire and Curacao – and on the same route the sailors paid attention to the Tortuga solonchaks. Fortunately for them, the Spanish military engineer Juan Bautista Antonelli, who inspected the island, found the reserves there inessential – and the Spaniards did not send troops there, as on other islands off the Caribbean coast of the continent. This gave the Netherlands a chance to gain a foothold and begin to peacefully and peacefully extract salt.

Scientists describe the space of La Tortuga as a collection of scapes, a complex unity of everyday practices, objects and natural conditions that make up the historically unique environment of the island. In total, archaeologists identified three such “skeypa”: the landscape of the bay, solonchak and battle.

Meeting a Dutchman of the XVII century with La Tortuga began at sea, when he opened a strip of shore – rugged vegetation, white sandy beaches and turquoise water. However, experienced sailors knew that this was a mirage: only barren mangroves, mosquitoes and gnus lived on the shore, and coastal waters were swarming with ramps, morays and burning corals. The bay of Punta Salinas was extremely inconvenient for ships – few where sailors could safely anchor. Currently, the ballast (stones, tiles, bricks) testifies to the transport with salt – they were thrown to the bottom to make room for the cargo. 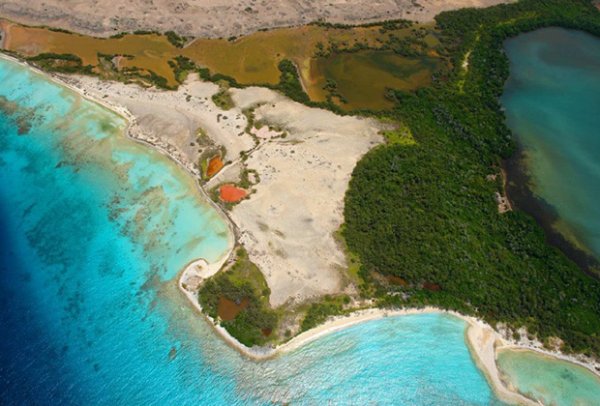 La Tortuga, view from the air

The expedition members shared their time between ships, shore and salt marsh. Yaliki scurried between flutes and a wooden pier, carrying people, shovels, wheelbarrows and guns. Traces of the pier from a solid wood, fortified with fascines and sand, are still visible on aerial photos of the bay. Teams of flutes (except for captains and soldiers) spent the whole day in solonchaks, under the scorching sun and insect attacks – and the ships on which they were going to have dinner (Dutch provisions) and smoke pipes, reminded them of the house. 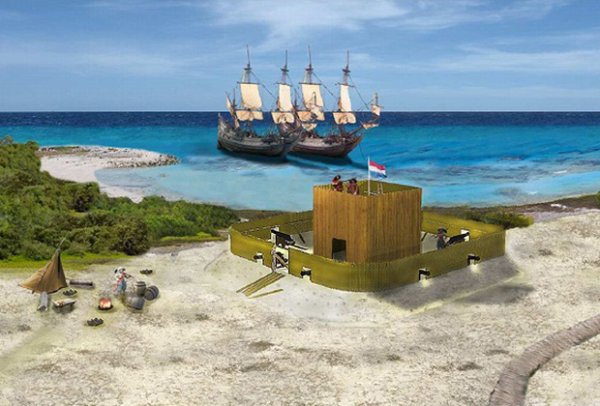 And in the morning the sailors went deep into the island. Insects poured on them, white sand blinded their eyes. Soon the smell of rotten mangrove thickets signaled the proximity of the salt marshes. Every spring, towards the end of the dry season, the water evaporated from the lagoons, and white and pink layers of salt crystallized there. When they were removed, poured into bags and loaded onto ships, the lagoon had to be “recharged” by hand: the Dutch wore seawater for several days in a row. Work in such conditions could only be at night, but even then the extraction of salt drove dozens of Europeans into the grave. To fill the holds of the seven flutes, 28 344 wheelbarrows of salt were required and two and a half months, according to the testimony of a Spanish sailor. During the 1630s, despite the occasional raids by the Castilians, the Dutch established a powerful platform of pine boards between the harbor and the lagoon, and manual pumps came to replace the buckets. Finally, they were not too lazy to build a complex system of canals, dams and sites for drying salt, significantly expanding the area of ​​crafts.

But then the engineer Antonelli, who knew about Dutch trades under the very nose of the Spaniards, decided to act smarter. Taking advantage of the absence of the Dutch in the winter, he drove a hundred Cuma- bono Indians and 50 soldiers with shovels. They dug two channels from the salt marsh to the sea, and eventually the lagoon was filled with stormy waters. Antonelli correctly calculated that the forces of ebb and flow will not allow the canals to close. Even if the Dutch will fill the canals, pumping water and cleaning the silt from the bottom of the lagoon will take at least several years. But even so, the engineer ordered six pies with 50 Indians and 20 Spaniards ready at hand – this mobile group will be able to open the channels again in a couple of days.

Hard-working Dutch merchants did not despair and tried to turn the destruction done by their enemies to their own advantage. They turned the lagoon, which was connected to the sea, into a huge salt water tank, which was poured into previously useless surrounding ponds. However, the last word was left for the Spaniards – it was always easier to destroy than to build. The soldiers of the governor of New Andalusia dug another channel and flooded all the salt marshes. 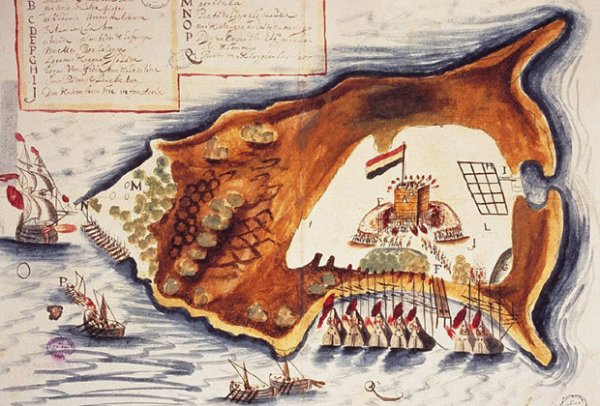 The attack of the Spaniards and Indians on the Dutch fort.
Figure Juan Bautista Antonelli

Although the main time spent on the island was routine (watering, excavating and transporting salt), the most traces in the archaeological record of La Tortuga left the battle of the Dutch against the Spaniards, who tried to block their enemies from accessing the fisheries. After the first unsuccessful clash in 1630, the Dutch sailors built an earthen bastion on the shore, and put three cannons there: one looked at the ships, the other looked at the salt marsh, the third towards the hill from which the Spanish landing earlier attacked. But in 1633 the new governor Arias Montano again successfully attacked, having beaten off from the Dutch one flute.

After several quiet seasons (sailors even managed to eliminate the consequences of destruction), in 1638, the Spaniards prepared a new landing. 13 pie with Spanish musketeers and Indian archers imperceptibly swam to the western part of the island. However, then they were seen from the Dutch sloop. Alas, the latter wanted to learn more about the enemies and sent three more sloops to their side. The Spaniards managed to capture one of them and find out the data on the strength and location of the Dutch garrison. At dawn, Montano’s troops attacked and stormed the fort for four hours under fire from cannons and muskets. By ten in the morning they managed to cut through the axes a hole in the wooden wall and rush inside, killing all the defenders.

It was the fort that became the main crop of archaeologists. The first exploration pit gave scientists fragments of pipes and bowls – apparently, they stumbled upon a trash can. Further excavations opened to scientists a massive sandy mound, surrounded on all sides by a moat. Despite the ephemeral nature of this structure from the point of view of defense, the Dutch were not too lazy to dig trenches. Fragments of 20 vessels collected on the territory of the fort are extremely diverse – these are tableware, and ware for storage and cooking, American, Dutch, German, porcelain, ceramics, glass and metal.

In addition to the shards, archaeologists have discovered many bones. The majority (about 600) belonged to rabbits – but it is not clear whether they were brought on ships or caught on the spot, on the dunes of La Tortuga. The rest – to pigs and cows (28), to birds (43). The absence of shellfish local shellfish and fish bones suggests that the Dutch were afraid to eat local fauna and spruce or brought provisions, or caught on the island of their familiar animals. There were no traces of foci on the island: apparently, the sailors and musketeers feared fires in the fort (near the gunpowder reserves) and cooked on the ships. 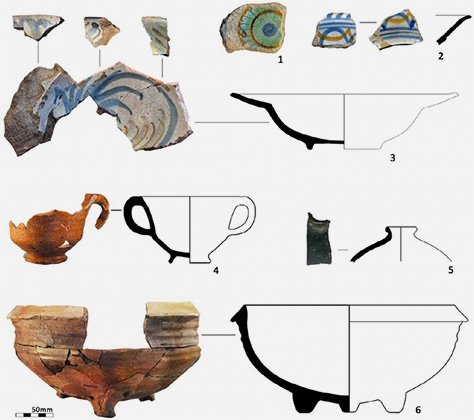 Finally, hundreds of unused bullets for muskets of different caliber and several cores were found at the site of the excavation. It is noteworthy that no shells were found near the shore to the east, south and northeast of the fort. The spatial distribution of the finds indicates that the fire from the muskets was opened from the south and south-west towards the north and north-west: this line of fire exactly corresponds to the fatal attack of the Spaniards in 1638 (as it was shown in the drawings of contemporaries).

However, even these meager finds allowed scientists to penetrate into the psyche of the parties fighting for the island. So, the moat, embankment and stockade indicate the common sense of the Dutch captains: they reasoned that their enemies reach La Tortuga only on pies where heavy artillery can not be delivered. Hence, for the defense of the crafts, a small fort with four light cannons and a couple of dozen musketeers is enough. In addition to prudence, the scientists emphasize the skill of the Dutch in controlling the natural environment of the island: canals, sluice gates, bridges and pumps – these structures have forever changed the landscape of La Tortuga.

Moreover, the Dutch were confident that their diligence would be overcome by chaotic gestures of destructive despair by the Castilian masters of Venezuela: raid, another raid, but then all the same it will be possible to fix everything. However, as history has shown, prudent Dutch underestimated the tenacity of the Spaniards – and concomitant luck.

But it can not be said that one side lost the other: the Dutch included the same capitalist calculation and estimated that further confrontation with raids from the mainland would be too expensive – it would be more profitable to seek salt elsewhere.