Secrets of the Sumerians – the Behistun inscription

The people of Ancient Iran have created a distinctive and highly developed civilization, one of the great achievements which is old Persian cuneiform. There are only 43 of the sign – unlike cuneiform, say, Akkadian, where the number of characters exceeds 600. However, Persian script was special: it was used mainly for ceremonial inscriptions, which adorned the tombs of the rulers, the walls and columns of palaces, carved on metal tableware, weapons, stone vases and seals. 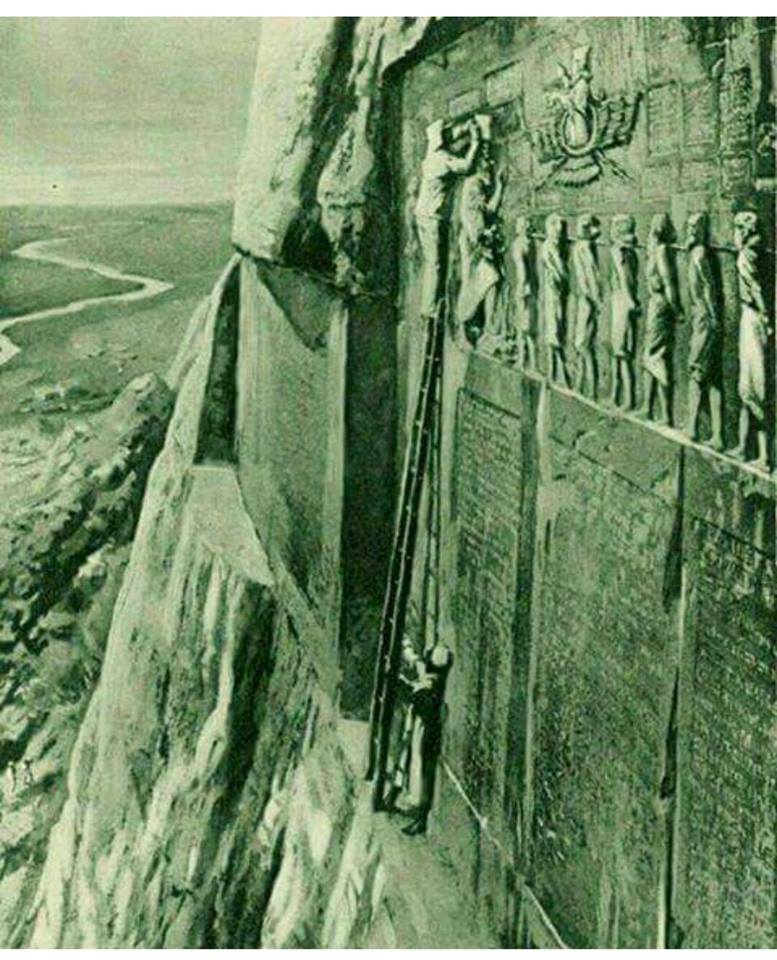 The most famous of these inscriptions is the Behistun, carved on the same rock, located between the cities of Hamadan and Kermanshah. In ancient times at the foot of the 520-meter cliff, is considered sacred, there was a road connecting Babylonia with the Medes and other countries to the East of it. Over the centuries this road was held by the Iranian army, the rulers of the phalanx of Alexander the great, hordes of Arab conquerors, the soldiers of both world wars. All of them curiously looked out, his head up, in a strange and mysterious cuneiform signs. Often the soldiers shot at them for fun during short rest stops.

But no human vandalism, nor ruthless time has been unable to destroy a priceless monument of history. Still under the slanting rays of the sun on a rocky plane are clearly seen cuneiform lines. The inscription, located at an altitude of 105 m, is carved in three languages – old Persian, Elamite and Akkadian – and tells of the events relating to the end of the reign of king Cambyses (d. in 522 BC) and the first years of the reign of Darius I (522-486 BC). The texts placed relief: God Ahura-Mazda, holding out his left hand to Darius, symbolically hands him the Imperial power, and raised his right hand blesses the king. Darius is depicted life-size Imperial crown. And his right hand in a blessing gesture extended towards Ahura-Mazda, the left it rests on the bow. The left foot tramples on the defeated Darius the magician Gaumata who seized the throne during the life of Cambyses. For Gaumati depicts eight of the rebels involved in the uprising at the accession of Darius to the throne, and rebellious leader of a tribe of the Saka tigrahauda. The hands of the prisoners tied behind his back, they bound one long chain. Behind Darius are two of his warriors, Spearman and Archer Gabri Aspirin. On the sides of the terrain are drawn to the column of text. The total height of the lettering along with the elevation is 7.8 m, width – 22 m.

To see the inscriptions and reliefs today only from afar is to view them from close range impossible. About 2300 years ago the ancient sculptors, when finished, went down and destroyed a stone steps to exclude any possibility to rise again to the monument. Maybe that’s why the Behistun inscription has survived relatively well: draw sacrilegious hand has not touched her. This circumstance had a different turn: after a relatively short time people have forgotten what is actually depicted here. Already the ancient Greek physician Ctesias the geographer, at the turn of V and IV centuries BC, who lived at the Persian court, called the Behistun relief monument of Babylonian Queen Semiramis.

The first news about the amazing signs on Arabian rocks and ruins, penetrated into Europe in the XVII century. The Italian merchant Pietro della Valle brought the first, though unsuccessful, copies of these signs – he sketched them with the remnants of the Palace walls of Persepolis. However, in Europe there was no single person who would be able to read them. Voices who have expressed doubts as to whether it is writing at all.

The true discovery of ancient Persian literature connected with the name of the famous traveler Carsten Niebuhr. During his six-year stay in the East, Niebuhr visited Persepolis, where carefully copied the inscriptions discovered in the ruins of the Persian capital. Returning to Europe, he published them in his work Description of travel to Arabia and surrounding countries (Copenhagen, 1774-1778).

Carsten Niebuhr was the first to come to the conclusion that the cuneiform inscriptions of Persepolis inscribed in three different scripts. Comparing them, he identified a cuneiform letter of the 43 signs – it is they, as we now know, was used by the ancient Persians. The first attempt to decipher this seemingly simple script was taken immediately after the publication of the book of Niebuhr. However, it took almost a century before in this area have been achieved any significant success. And they are associated primarily with the name of Englishman Henry Creswicke Rowlinson (1810-1895).

Like many other pioneers of archaeology, Rawlinson was a scientist by vocation rather than profession. Soldier, diplomat, politician, member of the British Parliament, he in his youth became interested in Persia, its language, history, culture. Since 1833 with the rank of major in the British army he was in the service of the Shah. This gave him the opportunity to meet with many ancient monuments of this country. Especially Rawlinson became interested in deciphering cuneiform. By this time, European scientists have managed to make significant progress in this direction. German researcher Georg Grotefend marked the beginning of the deciphering of the inscriptions of Persepolis, reading the names of the kings – Daraweesh (old Persian name of Darius), Xiara (Xerxes) and Vishtaspa. And when Rawlinson in 1836, met with publications Grotefend, noted with surprise that he, and a German scientist independently from each other came to the same conclusions!

However, Rawlinson, who worked directly on the ground, in Persia, was moved a little further Grotefend familiar with not only very good copies of old Persian texts. But this advantage was required to consolidate, and in 1837 Rawlinson decided on a desperate step: on a long rope, hanging over a dizzy precipice, he descends the steep cliff to the Behistun relief. Hanging over the abyss, carefully sketching Rawlinson cuneiform signs – another way to make a copy of he’s just not there. During the first descent Rawlinson managed to copy only the old Persian version of the text. The other two he sketched a few years later, when he had, as he wrote, giant ladder, marine rope and cats. Anyway, Rawlinson managed to make a very high quality for its time, a copy of the Behistun inscriptions. In any case, all ambiguities in the text managed to eliminate only in the 2nd half of the XX century, after several descents to the terrain – with the help of more modern tools.

That copied Rawlinson, was enough to continue working on the decoding of cuneiform. The Behistun inscription has surpassed in volume all the information collected up to this material. And this was a real trap for researchers!

Rawlinson made a completely unexpected discovery was that in some cases one and the same sign could mean different syllables, and even completely different words. And further decrypt it became clear that some such cases are rather the rule than the exception: multiple characters are combined into one group, losing as a result its original meaning, and Express a completely different concept or name.

It seemed that the decoding is stalled. But then suddenly fortune helped. During excavations, the Council (of Nineveh) was found hundreds of clay tablets – the ancient of dictionaries containing the decoding values of the cuneiform signs in their attitude towards letter writing. The significance of this find cannot be overemphasized – it greatly simplified the task of scientists. And in 1846, Rawlinson was able to present the Royal Asiatic society full translation of the Behistun inscriptions. This was the first significant, all the recognized triumph of the decipherment of cuneiform. The answer to the ancient Persian literature has ceased to be a problem. And through it lay the path and to decipher other ancient languages that it was written three scripts and three languages in Behistun and Persepolis, it was possible to read in the old Persian version. Thus, it has become clear and the text of the other two inscriptions, inscribed with still not deciphered the cuneiform systems.

Already in 1857 in London published the pamphlet the Inscription of Tiglath-pileser, king of Assyria, translated Rawlinson, Talbot, Dr. Hinks and Upperton, which became one of the most brilliant and the most convincing evidence of the ability of deciphering cuneiform texts. In 1862, Friedrich von Spiegel, Professor of Oriental languages in the University of Erlangen, published a fundamental work of ancient Persian cuneiform inscriptions. The basic text, translation, grammar and Glossary. The path to unlocking the secrets of ancient cuneiform were found.