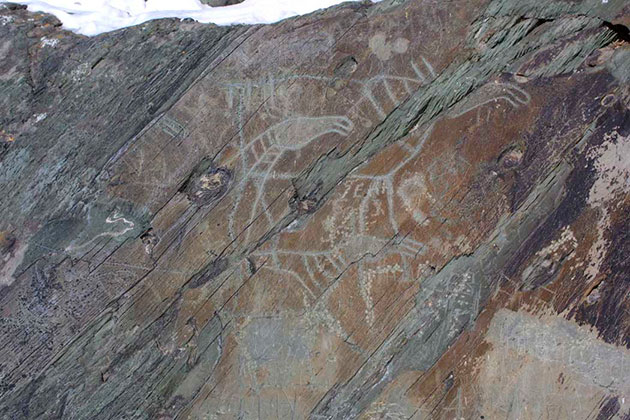 Scientist-Metallurgist put forward the theory that the ancient drawings on a rock on the river Tom was made a tool given to the ancients by aliens.

We used to be proud of the Tomsk Pisanitsa. Its moose and bears, unique designs, embossed on a rock thousands of years ago. At sunset, under the quiet running of the last tired rays of the sun these elk off the cliff, I swear, come to life. And “run” on the Bank of the mighty, free, eternal… wide nostrils Breathing in the smell of hot pine trees… Listening to the lapping greedily beloved river… And surprise, and rejoicing in the consistency of the world!

68-year-old Kemerovo Vladimir Shmakov, the beauty of the drawings and these places hear too. But the rough hands of a modern master (“machine tools – my profession”), the first referring to the lines carved on the rock by the ancient wizard, shook, the handwriting suddenly knowing.

The opening was incredible – says Vladimir. – Drawings made by humans. But the tool, which in that era simply could not be! Hence, it is the people who then gave! 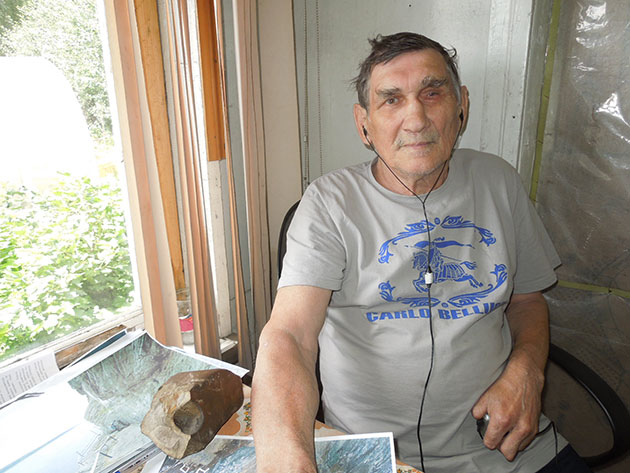 Vladimir Shmakov, having examined the drawings Tomsk petroglyphs, nominated unexpected version of them cut into the rock.

In General, this Kuzbasskaya detective about the art and aliens began with a different random finds another 30 odd years ago.

– I worked as a master teacher in Camtepe, at the Department of metal technology, led training workshops in milling, lathe, bench work with students, graduate students, – says Vladimir, a mechanical engineer. And went to output in Podyakovo, to help build the country high school friend. He asked me to distribute a big field, and I was working with a shovel, found at the depth of a strange stone that puzzled me hard.

Molten smoothly – from all sides, with a thin layer. Round melted as smoothly shallow hole, done exactly according to the compass…

There, next to the stone, were shards of pottery. And I realized that I had stumbled upon an ancient burial. Stone took. Place buried. And a few decades, looking at home on a rock on the shelf, all thought I will retire, he will get…

And so it happened.

Thought for years that this meteorite. Sent part of the stone to the Moscow experts. They said no, “terrestrial Sandstone and anthropogenic impact we do not consider”. So said about the holes in the stone.

But what kind of anthropogenic influence, and even in the old days? And what exactly has been done here. Its diameter of 22.5 mm. Milling machine its even now not done. We do not have cutters of this size. Besides, studying the stone, I became more and more convinced: the feeling that 25-30 grams of material under thermal influence of something… and vanished. Its as if “spat” out of stone. And the hole turned out with full proportionality in the length and depth.

The only possible explanation for this is the theory of the thermodynamics of the plasma. Plasma torches-cutting torches in the industry are used in shipyards, in the engineering industry for cutting of materials, cutting sheets. But the maximum temperature of the plasma in such plasmotrons – 3500 degrees, is the temperature of the electric arc. At this temperature, I thought, studying the hole in the rock, it would all just funnel was in full swing, and there would be soot, slag. But the hole is clean, smooth. Mean temperature exposure was 8000 degrees. Because even the most resistant tungsten – all materials at this temperature, evaporates, disappears. But such equipment is not available.

And yet… the Torches have appeared in the XX century. And the hole in the rock, done a similar technology appeared in ancient times. The only explanation – as it fantastically sounds – landing once in our area of the spacecraft. And meeting aliens who lived then already on Tom people. And demonstration – at a friendly meeting, but to prevent technical power of the aliens.

– Shot guests from the stars of “fire sticks” on this stone, punched a hole, and the elder of the tribe then stone all my life kept to the grave took. A century later, I accidentally dug up… Miklukho-Maklay when meeting with the natives, too, because the gun – to prevent, in the air – shot, – says Vladimir.
And once lined up the logic chain, the old engineer came up with the dream to find other traces of the arrival of UFOs.

Once they showed one of their tech, breaking stone, I reasoned, so could show to people and other its technologies. To leave including the autograph for the future. And where we have, in the vicinity of Kemerovo, the most historically memorable and sensational place? It is cave paintings of Tomsk petroglyphs. Thinking so, he went back. And I realized that rock: to understand the picture, it is necessary to enter it… 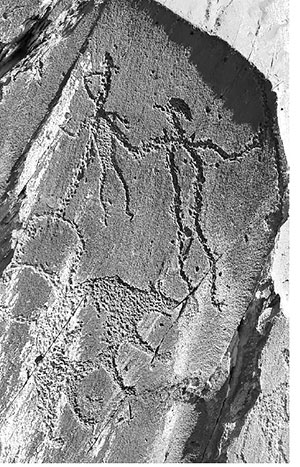 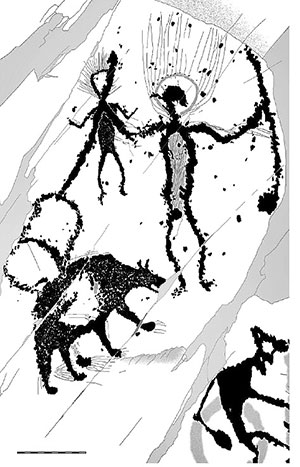 For many years it was believed that next to the bear shown some deity. And in 2005, a computer program found the deity (right) the halo, which depart from the rays.

The first meeting with petroglyphs had Vladimir Nikolaevich year ago. And was experiencing the wizard extreme to the touch.

– Due to the illness of my eye I then almost went blind 10% of vision left. And I was told that the urgent need for surgery. And then there is” heart surgery. And now, preparing for both operations, I decided to finish all unfinished. After all, how many times on the petroglyphs to get like, but work interfered, – says Vladimir. And there, at the rock, lines-furrows, the contours of the figures struck me. A stone cutter of this work is not done. Only a tool that is understandable to our age!

This conjecture helped the engineer to handle both operations. And recovering, starting to see again, he studied the illustrations from the cliff in the photos on the computer, bringing, increasing…

Yeah, stone by stone so as not to dislodge. After all, from hitting a stone cutter there would wirelesas, there would be lost… And then the dots skol is the same everywhere. There are no potholes. One class of purity. It seems that the ancient masters were cut and engraved in stone like some kind of automaton mechanism worked. Type electronicwarfare (and this is in the IV Millennium BC. – Ed.). The second option I see is the work of an ancient master by hand, but drawing it was filled… with a rod of steel, which is also impossible… But as you say… If the aliens are noticing attempts by knockout drawings on the rock, revealed an ancient master such a machine-Microperforated, gave them work, and on the rock appeared first masterpieces… after such a positive start in generations a desire to create new drawings only grew stronger, and the people did as best they could, improving… And improving the available tools for working manually…

And could tool for automatic padding to come up with one of the old masters?

– No, there was no electricity, steel was not…

…By the way, the engineer Shmakov, insisting on the version of the tool, this time to the ancient artist aliens (or a deity descended from heaven), figured out how to make this tool now. He thinks, can be useful for refreshing the outlines of the drawings in the future.

And a picture of how the aliens showed stunned earthlings work on the rock, Vladimir Nikolaevich is easy.

“Look,” he says, like a guest with a UFO, explaining to me the earth’s native, take that same stone Sandstone. Now take the angle grinder with a diamond wheel. One, two, three…

Roars cutter. Cuts the stone. The dust is flying on the porch. And on the stone appears a picture of a Christmas tree. Lines-furrows – almost like the famous rock…

– No – disables the tool from the socket the master. He adds that at the Tomsk petroglyphs on other rocks in the world there are a lot of original drawn and engraved ancient drawings made by the people. But someone taught them?

The “mystery of the petroglyphs
solved not all…”

As explained by the “Kuzbass” in the Museum-reserve “Tomsk Pisanitsa”, the study of rock paintings is ongoing. And the current cameras with the programs of the computer processing of pictures helps you find… new pictures and details. For example, in 2005, so was able to identify a halo over the head of the creature called the Sun-in the scientific world. Because of the rays radiating from the head.

– And if it’s not a halo, a helmet? And what is not a portrait of a stranger?
– In the story of the arrival of a UFO, his participation and the reflection of those events in pictures can’t believe it. And the character is considered as a simple Sun-deity. And what about the technology of drawing of drawings on a rock… for a Long time considered man to beat stone by stone. But a recent first study of the scientist (specialist in the study of the origin of the lines in the pattern) put forward a second version is about the metal.