Secrets of the Vatican library 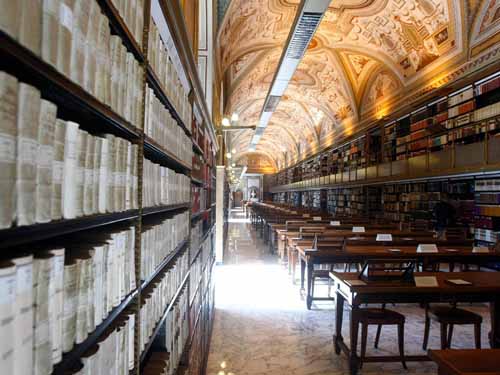 Throughout its history mankind has hoarded the knowledge is in the form of inscriptions on stones, scrolls, later books and manuscripts. Created entire libraries. We know about the existence of huge libraries of antiquity – the library of Alexandria, library of the secret society “Union of the Nine unknown,” the library of Ivan the terrible (Liberia), etc.

Unfortunately, they all lost. But there is still one huge library, with which nothing happened. Here only access to it is closed to mere mortals. We are talking about the Vatican library.

About this library you can write dozens of historical and detective novels. The fact is that in the world there is such a place where it would be focused and at the same time hidden from the people is countless number of books, maps and other documents telling the true history of mankind.

Which, by the way, not ten thousand years old, as we are told by Orthodox historians, and at least tens of millions.

This is indicated not only by archaeological excavations (although about the unique artifacts found Orthodox science is silent – as the true foundations of the Vatican library), and numerous myths and legends of almost all Nations of the world.

But the attitude of this rich heritage, this mythological knowledge that the people were unable to take any Anunnaki and the Illuminati, we have again distorted-zombie, i.e., as to some fairy tales that have nothing to do with the true history of the Earth. But sorry…

According to official figures, in the Vatican Apostolic library is kept almost 2 million printing editions (both old and some modern), 150 thousand manuscripts and archival volumes, 8300 incunabula (of which 65 parchment), more than 100 thousand prints, about 200 thousand cards and documents, as well as many works of art, not amenable to routine accounting, including 300 thousand medals and coins, and more.

According to unofficial data, in the underground vaults of the Vatican, which occupy a huge area, there are many secret rooms, known only to the initiated. A Dad, spending many years in the Vatican, didn’t even know about their existence.

It is in these rooms are priceless manuscripts that shed light on various mysteries of the universe, they can find answers to any questions, even about the origin of life on Earth.

It contains almost all the ancient libraries of the world, including allegedly burned or dead Thebes, Carthage and, of course, Alexandria.

The Alexandria library was founded by Pharaoh Ptolemy Soter shortly before the beginning of our era and replenished on a global scale. Egyptian officials have taken to the library all the imported Greek parchment: each ship arrived to Alexandria, if it were a literary work, or had to sell their library, or provide for copying.

Keepers of the library hastily rewrote all gets under hand books, hundreds of slaves worked every day, copying and sorting thousands of scrolls. Ultimately to the beginning of our era, the Alexandrian library contained many thousands of manuscripts and was considered the largest collection of books of the ancient world.

Here were kept the works of outstanding scholars and writers of books in dozens of different languages. Said that in the world there is no valuable literary works, copies of which would not be in the library of Alexandria.

The story of the alleged fire, according to independent researchers, is just a smokescreen, designed to hide from mankind what it has not able to digest.

Again according to unofficial sources, the Vatican created by the priests of the temple of Amun, so his true residence is not in Italy, and in the Egyptian Theban temple Oset, which represents a dark person of Seth, or Amon. Italian Vatican today is more of a guard secret knowledge of humanity.

It is from here throw them mere crumbs, so that modern civilization has developed in such a way and at a pace that is pleasing to the true owners of the Vatican.

According to publicly available sources and encyclopedias, the Vatican library was founded on 15 June 1475, after the publication of Pope Sixtus IV, the respective bullae. However, this did not accurately reflect reality. By this time the papal library already had a long and rich history.

The Vatican was the collection of ancient manuscripts, which were collected by the predecessors of Sixtus IV. They followed the tradition, which appeared in the fourth century under Pope Damasus I and continued by Pope Boniface VIII, who created the first full at the time the directory, and also the real founder of the library by Pope Nicholas V, declared it public and left behind more than a thousand different manuscripts.

After a short period of time after Vatican library was established, there were already more than three thousand original manuscripts, purchased the papal nunciate in Europe.

The contents of a large number of works have perpetuated for future generations the many copyists. In that period the collection was not only theological writings and sacred books, but also classical works in Latin, Greek, Hebrew, Coptic, drevneevreyskoe and Arabic literature, philosophical treatises, books on history, law, architecture, music and art.

The Vatican library serves as a magnet, but in order to uncover her secrets, you need to work with its funds, and it is not easy. The readers access to many archives is strictly limited.

For most documents, you must make a special request, explaining the reason for his interest. And not the fact that the request will be considered positively. In this case, the historian must possess an impeccable reputation and flawless now if she decide to Vatican authorities.

As for the Vatican’s secret archives, i.e., private Foundation libraries, there is almost impossible to get: access is allowed again only the Vatican authorities.

And although officially the library is open for scientific and research work, every day it can get only about 150 experts and scholars. With the pace of studying in the library treasures will take 1250 years, because the total length of the shelves of the library, consisting of 650 divisions, is 85 km away.

If someone gets access to working with the library, to make out he can not do anything. This privilege is available only to the Pope.

The Vatican library is one of the most protected in the world of objects, because its protection is more serious than any nuclear power plants. In addition to the numerous Swiss guards, the rest of the library is guarded by an advanced automatic system, forming several levels of protection.

However, there are cases when ancient manuscripts, which, according to historians, the province of all mankind, trying to steal. So, in 1996, American Professor and art historian was condemned for stealing a few pages torn from a manuscript of the XIV century the pen of Francesco Petrarca.

The legacy, which was collected on the head of the Roman Catholic Church has greatly increased due to the acquisition, receipt for a gift or for storage of entire libraries. So the Vatican got publications from a number of major European libraries: Urbino, Palatine, Heidelberg and others.

In addition, the library houses many archives, which are still not understood. It does have a value to which access can be obtained only theoretically. For example, some manuscripts of Leonardo da Vinci, which so far does not show to the General public. Why? There is speculation that they contain something that could undermine the prestige of the Church.

Special mystery library – a mysterious book of ancient Indians-Toltecs. About these books we only know that they do exist. Everything else is rumors, legends and hypotheses.

Also there is a legend that in the Vatican library there is a copy of one of labor of Cagliostro. There is a fragment of the text describing the process of rejuvenation or regeneration of the body: “drink this, man for three days loses consciousness and speech. There are frequent cramps, convulsions, the body acts perspiration. After this state, in which man, however, does not feel any pain, at the thirty-sixth day he takes the third and last grain of the “red lion” (i.e. the elixir), and then falls into a deep restful sleep, during which a man sloughs off the skin, teeth fall out, hair and nails, out of the bowels of the film… it All grows again for several days. On the morning of the fortieth day he leaves the room a new person, feeling full rejuvenation…”.

Although this description sounds fantastic, it’s amazing just repeat one little-known method of rejuvenation “Kaya Kappa”, has come down to us from Ancient India.

This secret course on return of youth held twice tapaswini Indian, who lived 185 years. The first time he’s rejuvenated by the method of “Kaya Kappa”, reaching the age of 90 years.

A curious fact is that his miraculous transformation also took forty days, for the greater part of them he slept. At the expiration of forty days, he grew new hair and teeth and body and returned youth and vigor. Parallel with the work of count Cagliostro is pretty obvious, so it’s possible that the rumors about rejuvenating elixir real.

In 2012, the Vatican Apostolic library for the first time permitted to make some of their records outside of the Holy state and to put them on public display at the Capitoline Museum in Rome.

The gift, which the Vatican made Rome and the world, pursued a very simple goal. “First of all, it is important to dispel the myths and destroy the legends that surround this great collection of human knowledge,” he explained while Gianni Venditti, archivist and curator of the exhibition with the symbolic title “Light in darkness”.

All the papers presented were original and covered a period of almost 1200 years, revealing the pages of history, never before available to the General public. At the exhibition all curious people were able to see the manuscripts, papal bulls, the judicial conclusion of the proceedings against heretics, encrypted emails, personal correspondence of popes and emperors, etc.

One of the most interesting exhibits are the protocols of the trial of Galileo Galilei, a bull of excommunication of Martin Luther and Michelangelo a letter about the progress of one of the seven pilgrimage basilicas of Rome – the Church of San Pietro in Vincoli.

However, as you might guess, the publication of all these documents is not for the Vatican no threat – about them one way or another was known before.

Many researchers believe that the classification of the archives of the Vatican had a hand the masons, which are considered the most secret government of the Earth, about which all speak, but which nevertheless unknown. We know someday these secrets? I want to believe…