September 2017 became the hottest and hurricane 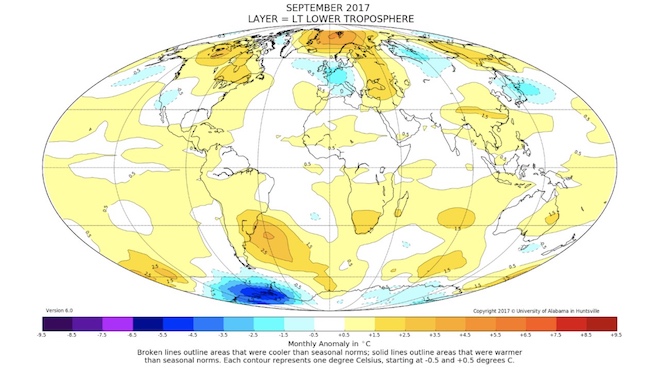 Last month was the warmest September in four decades of observations, according to an analysis of satellite data from the University of Alabama in Huntsville (UAH).

“It is particularly noteworthy that of the 20 highest global mean September temperatures, only in September 2017 there was no El Niño,” said Dr. John Christie, director of the Earth System Science Science Center.

Global records during the warmest month or year are usually reached when the anthropogenic trend of global warming receives a temporary impulse from El Niño, which increases warming in the tropical Pacific Ocean. Consequently, when temperature records are established in the absence of El Niño, this is another indication that the underlying human-induced trend of global warming is stronger than ever.

The most recent record of the warmest September was set in 2013, in the absence of El Niño, and this record was 0.32 ° C below the current one.

It is interesting that Dr. Christie, along with his colleague from the United Kingdom, Roy Spencer, mistakenly interpreted satellite measurements of tropospheric temperatures for decades. In fact, they have consistently underestimated global warming.

This more than a decade of miscalculations has contributed to the emergence of one of the most enduring myths among people denying climate change: that satellite data does not show global warming, which reflects the measurements of the temperature of the earth’s surface.

Even now, one of the favorite false arguments of Sir Ted Cruz (R-TX) and his followers is that “satellites have not been warming since 1998,” although this point of view lost all meaning when 2014 was the warmest year in history observations, then 2015 broke the record of 2014, and the average temperature for 2016 exceeded the values ​​of 2015.

“Global warming has become so obvious that now even selective sets of skeptic data show it,” said climatologist Michael Mann. Everyone who lives in a world of real scientific analysis can see that satellite data, terrestrial weather stations, sea buoys and even meteorological probes show a stable long-term warming trend.

“Even questionable satellite entries in UAH, where historically underestimated the rate of global warming due to consecutive mathematical errors, can no longer hide the anomalous warming of the planet,” Mann said.

Anomalies from December 1978 to September 2017. © UNIVERSITY OF ALABAMA, HUNTSVILLE

In addition to the temperature record, in September 2017 there was the highest hurricane activity in the Atlantic. This parameter is measured by the cyclone accumulated energy (ACE) index, which is calculated by adding each tropical storm or hurricane wind speed during its life cycle.

Hurricanes, such as Harvey, and especially Irma and Maria, were not only epically strong, they were durable – and this is expected on a warm planet where the warm water needed to sustain a major hurricane spreads to larger and long distances.

I can’t understand it.