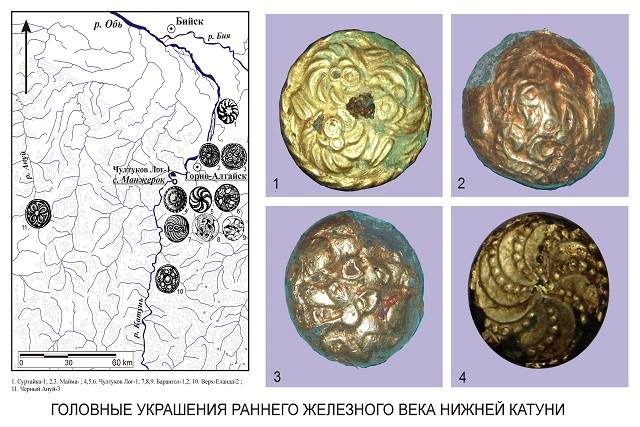 Scientists from the Institute of Archeology and Ethnography of the SB RAS have studied the features of the composition of gold and silver foil of Southern Siberia in the era of early iron and recognized the technique of its production as unique.

In the era of early iron – the Scythian time (VII-III centuries BC) – the social-status structure of society became more complicated, it became necessary to decorate clothes, then the fashion for the use of foil appeared. There was a developed production of silver and gold foil products, and the technique of its production was unique.

“Here, unlike adjacent territories, the tradition of making articles and jewelry not from alloys but from native metals for a long time was preserved, in such raw materials the content of gold or silver is very high,” said Andrey Borodovsky, leading researcher at the Institute of Atomic Energy of the SB RAS.

It turned out that the production of foil from high-quality native metal is not associated with cultural identity. The scientist compared the pazyrykskuyu culture, which is close to the deposits of the Mountain Altai, and the Kulay culture, which has nothing to do with this place. Kulaytsy lived in the forests and had access to high-quality metals, they made from them their ritual accessories.

The foil was used to decorate items of clothing and household utensils. She was covered with metal products, bimetallic barrettes from a bronze base, covered with gold foil on top. Foil was a status attribute among the upper strata of society.

Last year, the archaeologists of the Institute of Atomic Energy of the SB RAS have found the tools by which the foil was processed. In the mound of the early Iron Age era, stone anvils were found where the metal was expanded to the required thickness and dimensions.

By tracological methods, scientists found out exactly how the process was going. From what the edges represent, it can be assumed that the foil products were processed not on a metal, but on a hard, mineral surface. The foil was produced by handicraft industry.

“One of these anvils I found a few years before, without linking it to the process of making foil. And then we found two more such samples and found out that they correspond in traces and in character with this era. Then almost the entire technological chain was closed, “- said Andrei Borodovsky.

In the Middle Ages, foil as a material was unclaimed, but then its production was again activated during the Renaissance.
Recall that in March 2017 Novosibirsk archaeologists discovered the European roots of the ancient Scythians.