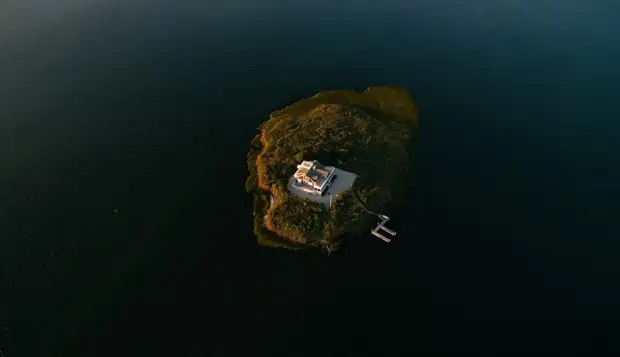 The smallest inhabited island is located between Canada and the United States. It is part of a large archipelago. The size of the island is 306 square meters, it is 20 steps along one coast and 15 along the other.

Life on the island is comfortable: electricity is supplied to the house through underwater communications, and the flow of the river is regulated by sluices. But just in case, during construction, the foundation of the house was raised a meter above the water level.

One house, one tree, a tiny beach and water all around – such a picture was imagined by a family that has owned the island for over 70 years. But solitude did not work. Tourists take boat trips daily to photograph the island from the water and from the air.

A small island as a profitable business

The people of Sweden have long understood that the dream of a home on an island can be monetized. The Stockholm archipelago has become a chain of hotels on the water, where anyone can rent a house with all the amenities. The Swedes are making their homes autonomous: the islands have gas and electricity. The interiors often have fireplaces, barbecue areas – everything you need for a comfortable vacation.

Uganda and Kenya have been unable to share Migingo for 16 years, a rocky island on Lake Victoria.

Despite this, there is a record population density on a piece of land: 500 people settled on 2000 square meters. These are fishermen who work and trade with their wives on Migingo. Every day tourists come to the island for a short time – a tour of the territory takes 10 minutes.

There is no water, electricity or internet on the island. The vacant space is occupied by temporary structures made of metal sheets, in which the locals sleep and work – there are no toilets in the houses. But on the island there is where to have fun: there are bars, one hairdresser and a brothel.

All covered in green

The Scottish island of Fula in the Atlantic Ocean has its own airport, shop, elementary school and post office. True, only 30 people live on it. The inhabitants are engaged in fishing, selling wool and keeping order in the nature reserve, which is located on the island. Fula is connected to the mainland by ferry service.