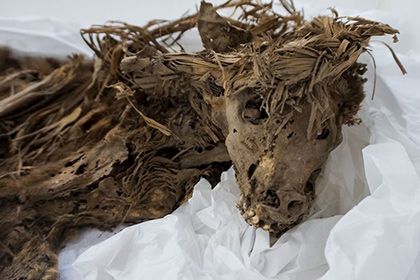 Peruvian archaeologists have tried to explain the strange discovery they made in 2012: the remains of about hundreds of dogs buried in the ruins of ancient settlements on the territory of the zoo of Lima. About it, reports Science News.

Only Karina Venegas Gutierrez (Karina Venegas Gutiérrez) found the skulls of people 126 and 128 dogs — large, small and medium. In some specimens preserved skin, hair, noses and ears. Like people, Pets before burial, wrapped in cloth. Judging by the fragments of pottery and other artifacts, burials were made in the old and new era.

These remains put archaeologists in a deadlock. In pre-Columbian America met a dog cemetery, but under a zoo of Lima people and dogs buried mixed up — this fact also excludes the burial of the “smaller brothers” as escorts in the journey to the underworld.

Revealed this mystery the examination of the bones of people. It turned out that under the zoo are buried men and women aged 20 to 40 years — at this age are unlikely to die from natural causes. Multiple fractures of ribs, arms and legs, fractured skulls talking about what people were brutally murdered. On the bones of dogs damage their suspect Venegas Gutierrez, strangled. While the archaeologist only offer the following conjecture: there was some catastrophe (possibly a military defeat), after which the dead members of the community to sacrifice dogs.

Catastrophic events chronologically correspond to the transitional period in the history of Peru. At the turn of the old and the new era ancient culture of Lima ceded new — ICMA. According to Venegas Gutierrez, the expansion of ICMA could cause tragic events connected with the mass murder of dogs.