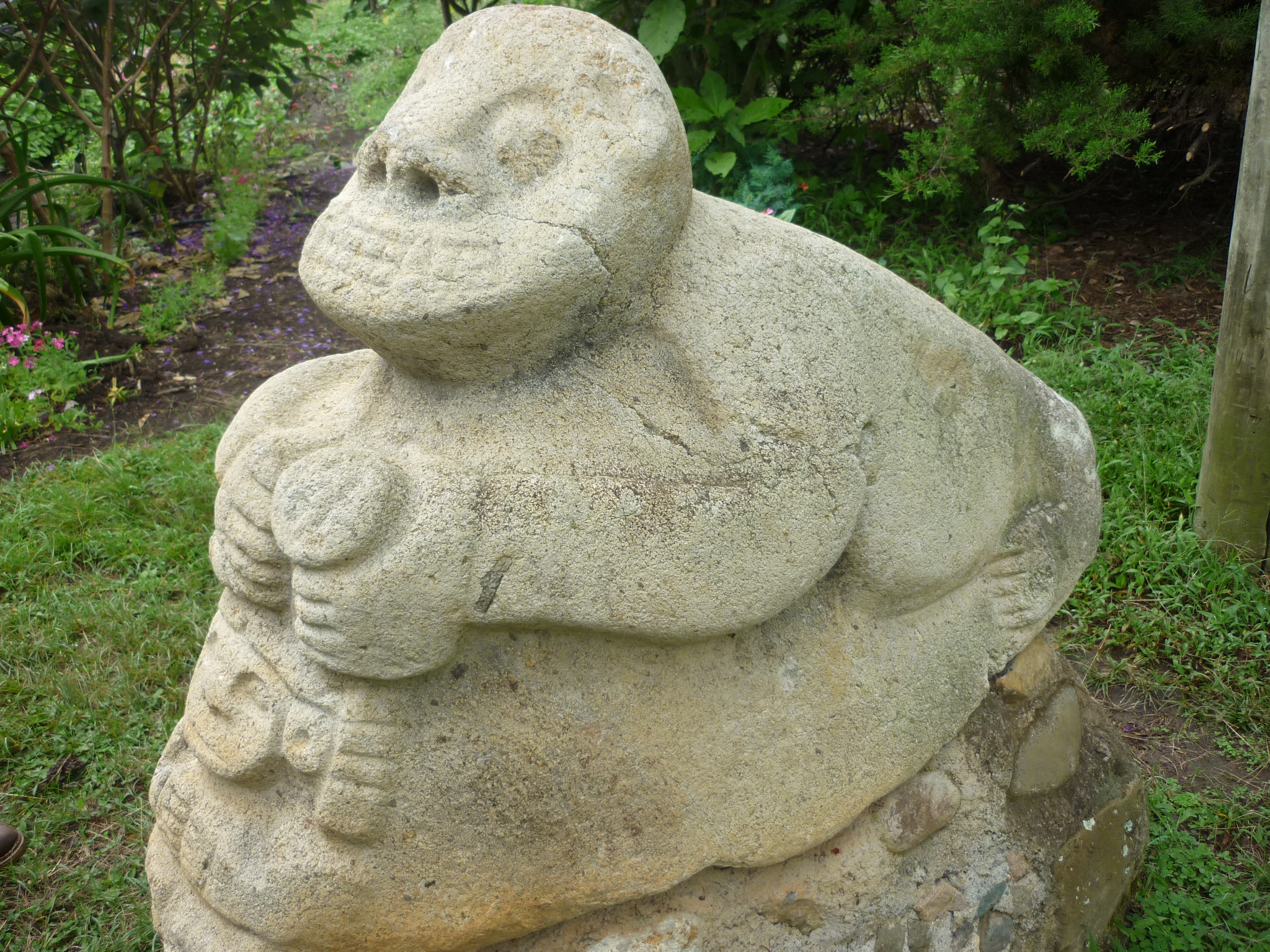 San Agustin is a UNESCO world heritage site, 550 square kilometres of hidden underground treasures of which are studied, as scientists say, only 10% and the rest is covered with darkness of obscurity.

Stone mystery in San Agustin, ancient Egyptian pyramids, but if the builders of the latter, though the characters left a bit which lifts the veil of secrecy and allowing us into the ancient world of Egypt, from the sculptors of San Agustin were only their creations, with more than 500 statues height up to five meters, sarcophagi and burial mounds, is firmly associated with the other world.

San Agustin (San Agustin in Spanish) is a town and municipality in the South of Colombia in the Department of Huila (Huila). The town is located 227 km from the capital of the Department Neiva and about five kilometers from Bogota, Colombia’s capital. This provincial Indian village, which is not on any map, is located not far from the main water artery of the Columbia river Magdalena.

The population is about 30,000 people. Originally, the city was founded as a village in 1752г. the Spaniard Alejo, Astudillo, but the Indians soon destroyed it. The modern village was founded in 1790. Lucas de frickson Erazo and Mandiana (Lucas de Herazo y Mendigana).
In this area found traces of one of the most interesting civilizations of the Western hemisphere, in connection with which there was established the archaeological Park, belonging to UNESCO.

Near San Agustin, at an altitude of 1800 meters at the source of the Magdalena river, in a cave found a large number of stone figures, vaguely reminiscent of the statue of the era of the Aztec Empire.

In 1758 the Spanish friar Juan de Santa reported on the mysterious stone sculptures in the valley of San Agustin, which was worshipped by the Indians.

In the mid-nineteenth century Italian General Codazzi penetrated into the virgin forest in the vicinity of San Agustin and made sketches of several of the statues.

In the beginning of XX century Heidelberg University Professor Carl Stapel hotels in the Colombian highlands, made plaster casts of statues and discovered the underground passages linking the churches together.

In 1912 in San Agustin appeared ethnologist Theodore K. Preuss. He measured the statues and along the way I found some tombs. To his amazement, he found in them the slightest traces of skeletons. Preus came to the conclusion that the bones completely disintegrated into dust.

Today in the Valley of the statues found more than 500 giant statues of people, gods and animals. They are scattered in more than 20 places in the forest, completely overgrown with orchids, the valley of the river Magdalena.

The oldest figure of San Agustin date back to 800 BC. On top of the artificial hill are two figures, called “Double I”. One of the sculptures arms crossed on his chest. On a gloomy face under a wide nose ominously grinning four fangs. A closer look of deep eye sockets fixed into the valley. The head is crowned with a tight-fitting helmet. Like the backpack on this monster hanging second figure, which archaeologists have identified as Jaguar.

Here is the abstract figures with a narrow, slit-like eyes and the inevitable teeth Dracula.

The ancient masons knew in the fine arts they had mastered their skills, as illustrated by the statues of San Agustin. They had a clear distinction between people and humanoid creatures — those with teeth Dracula. 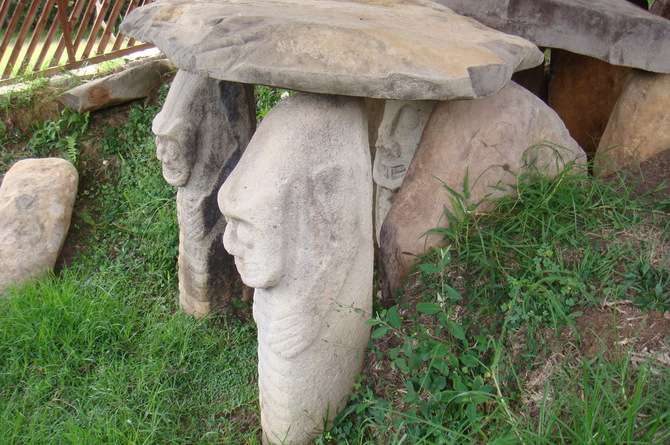 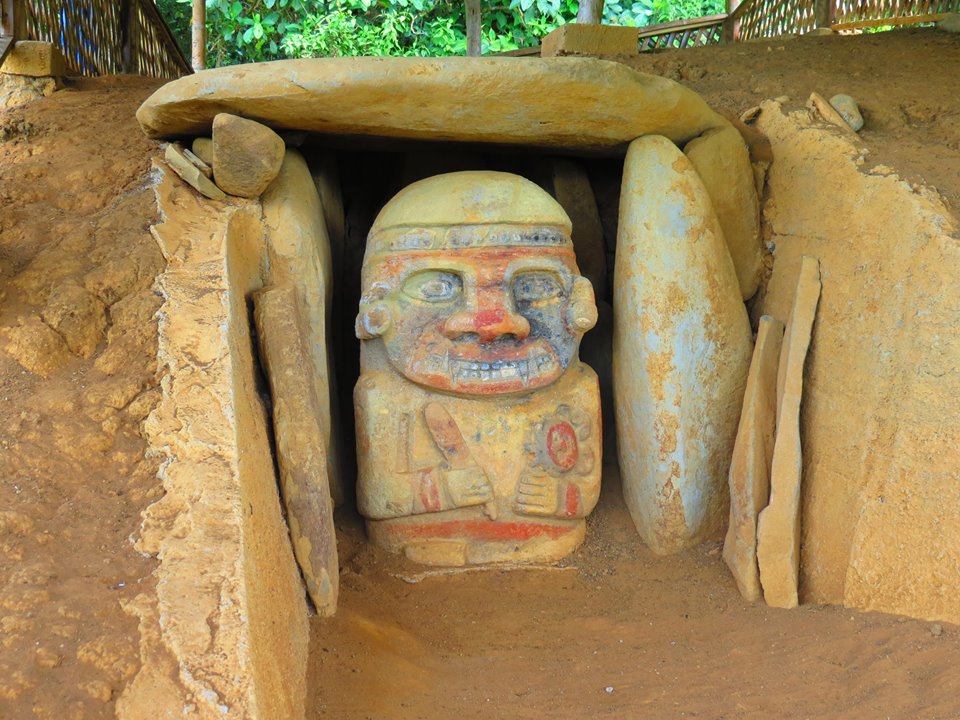 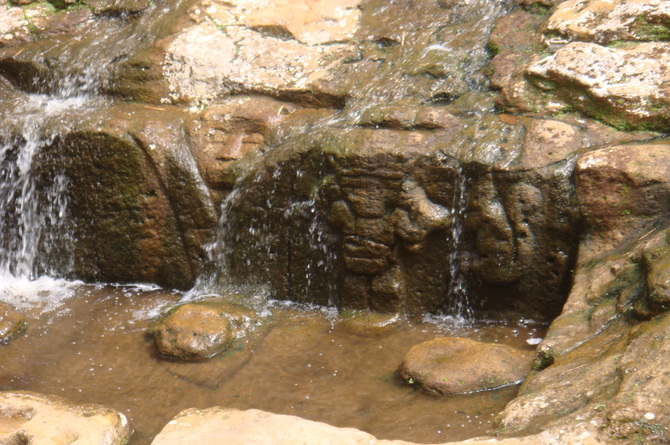 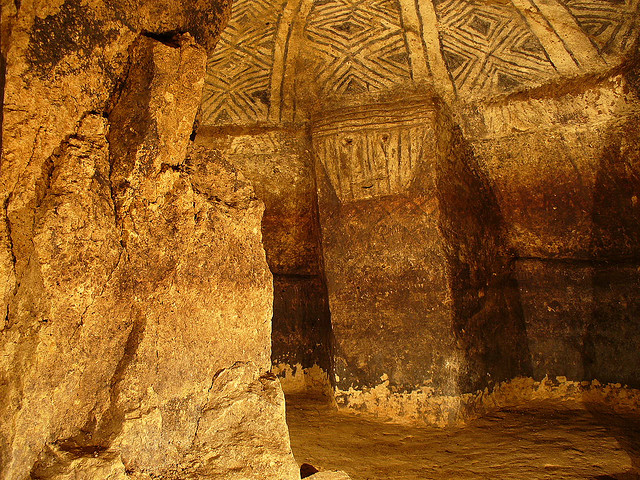 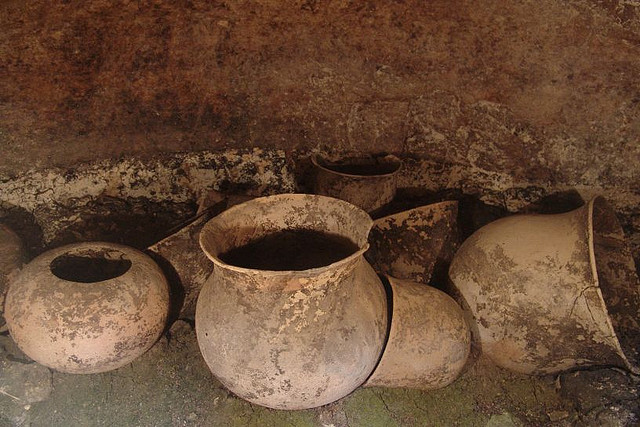 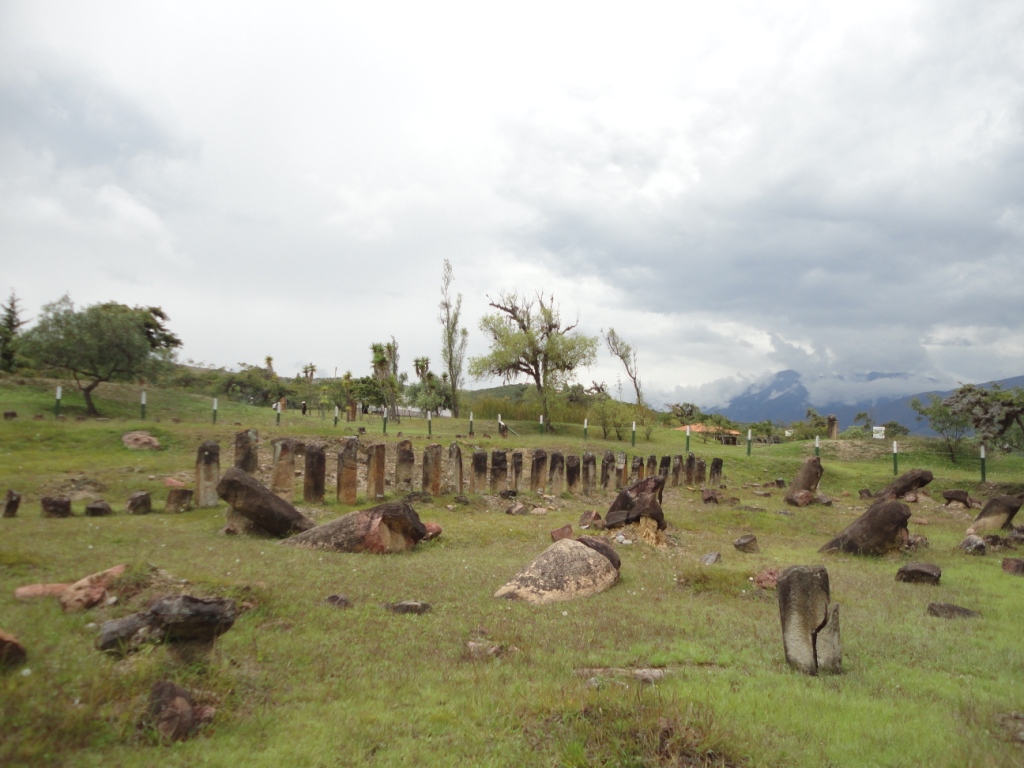 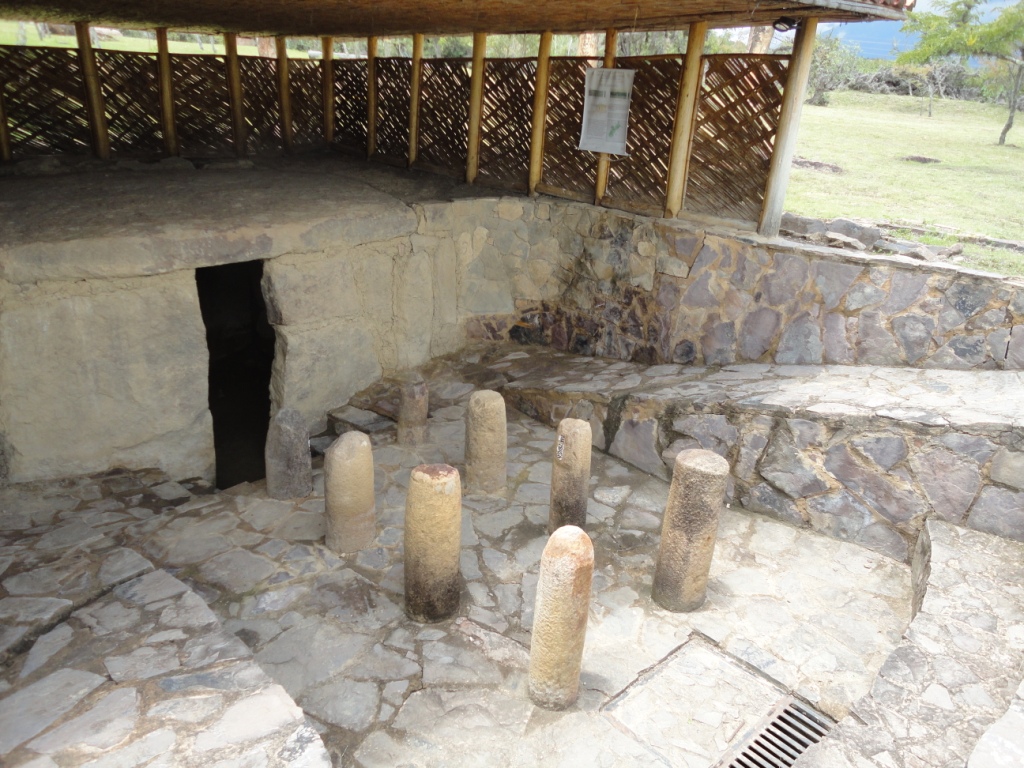 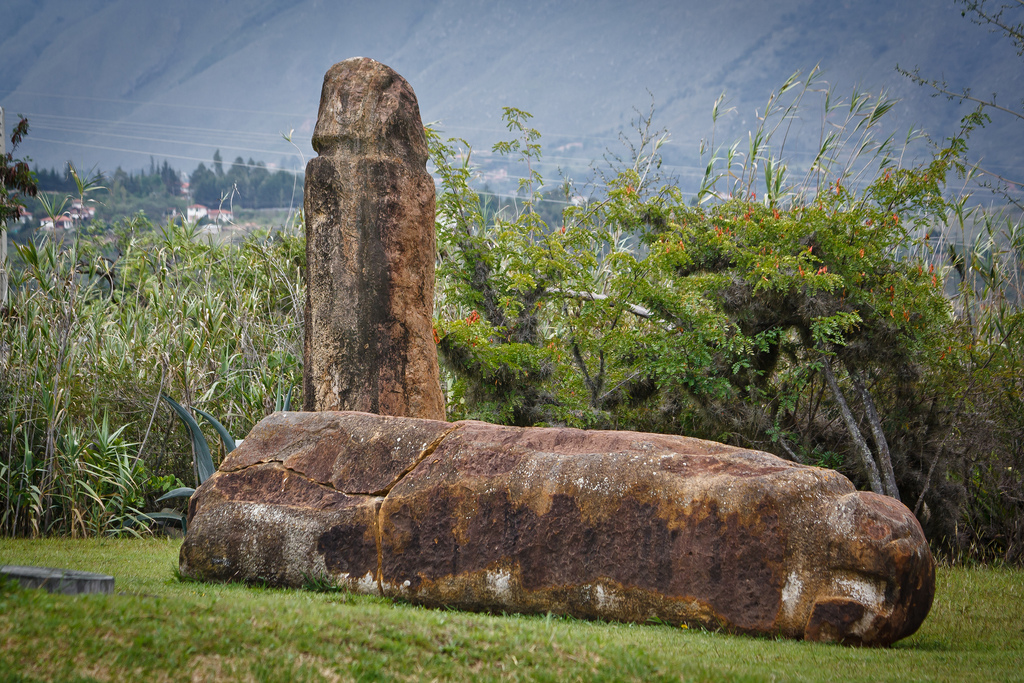 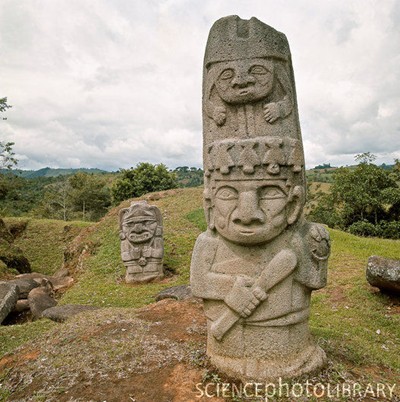 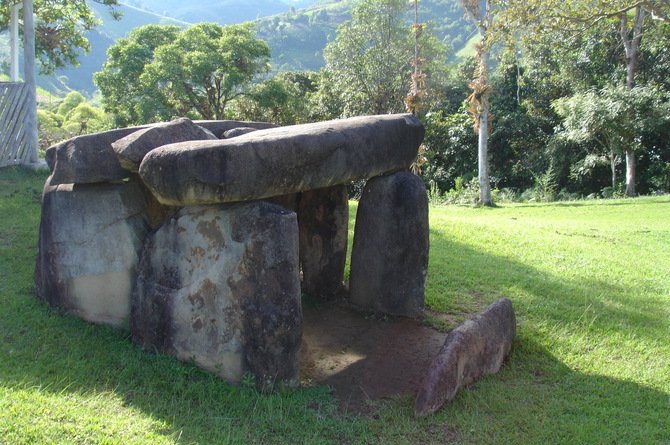 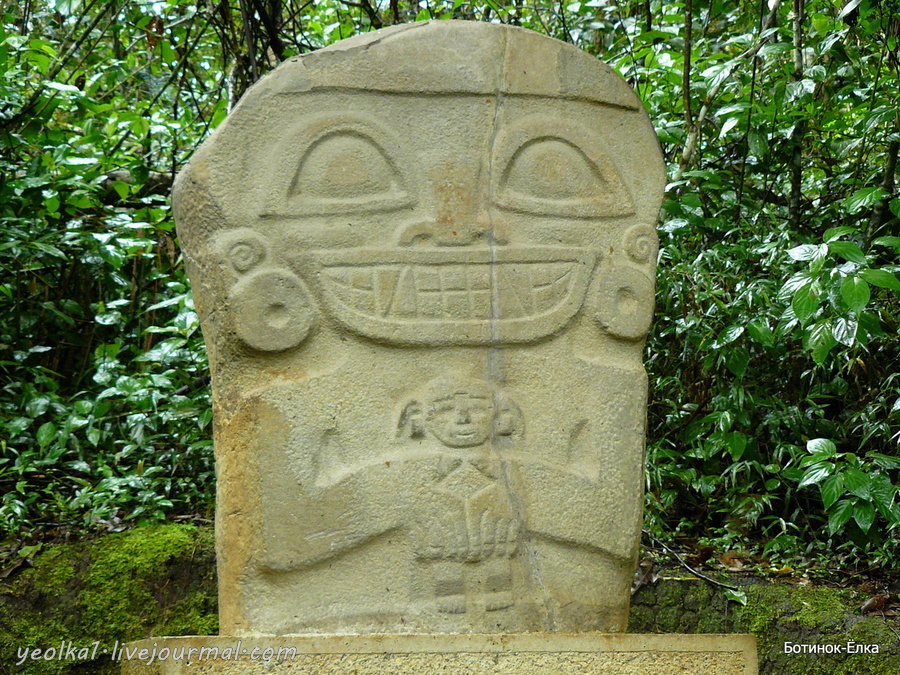 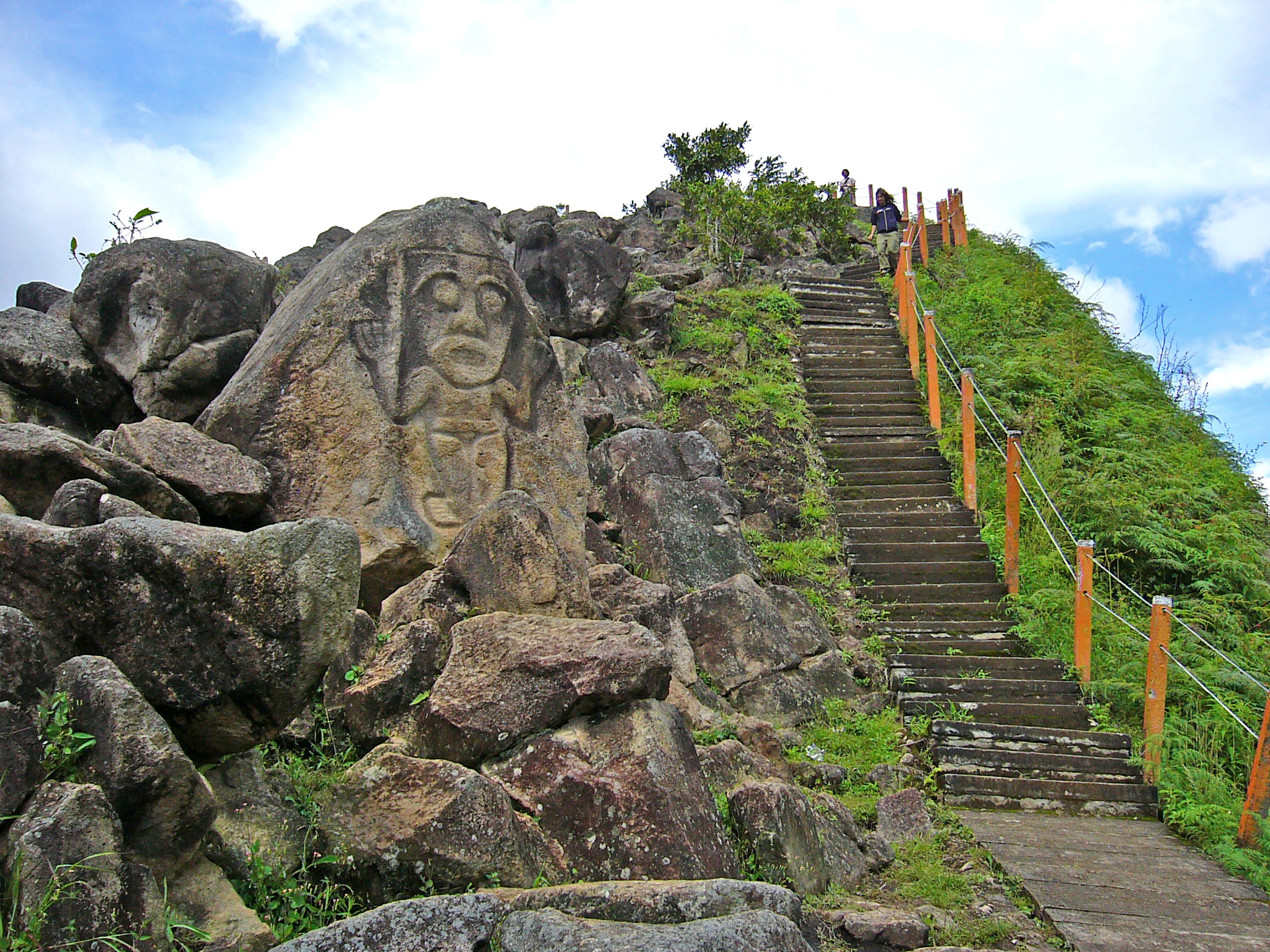 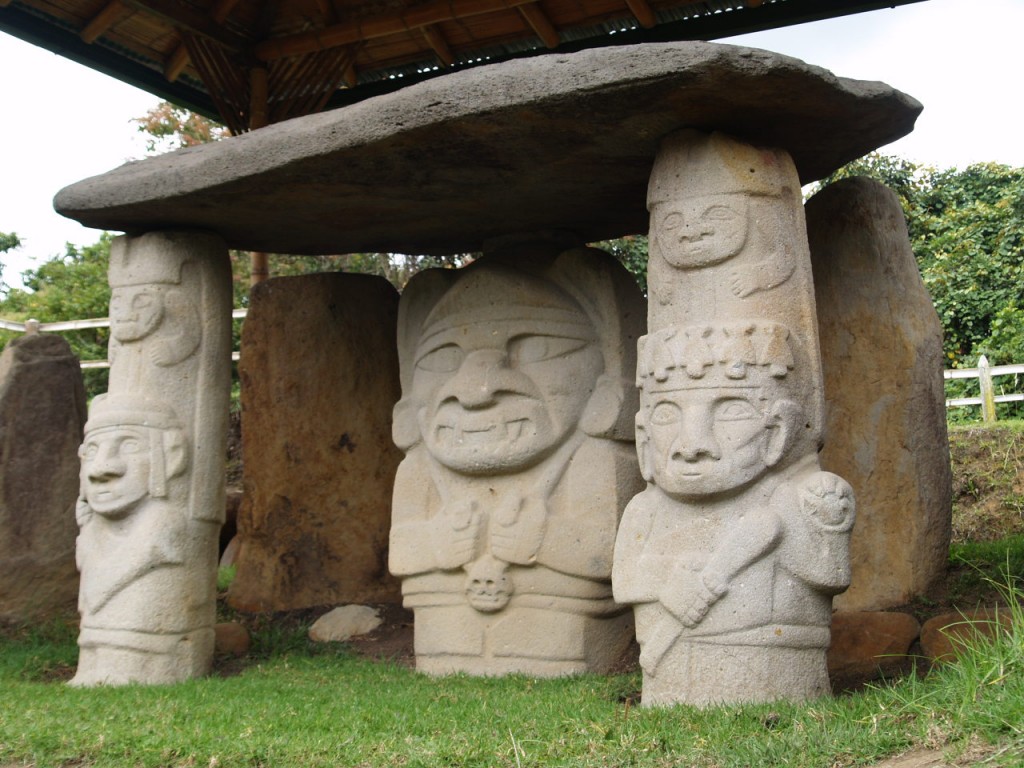 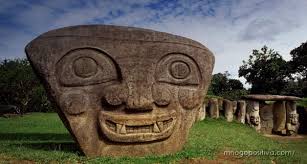 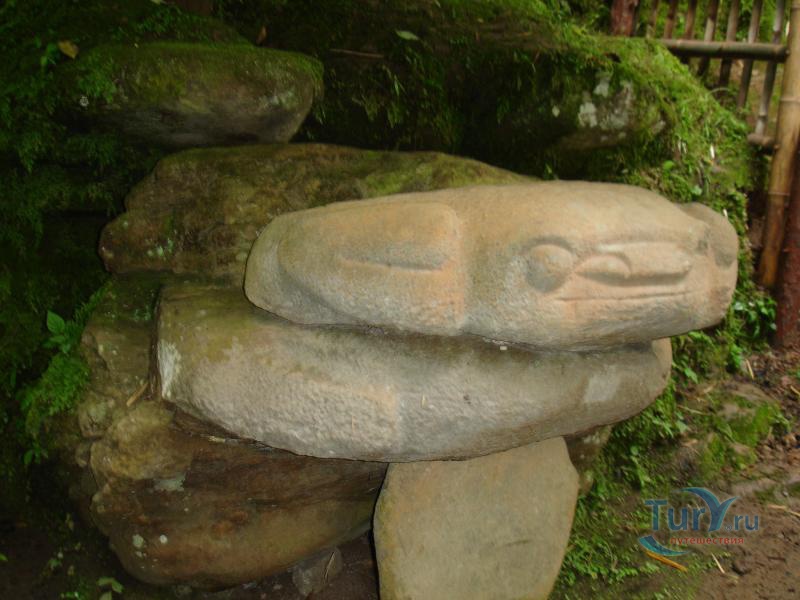 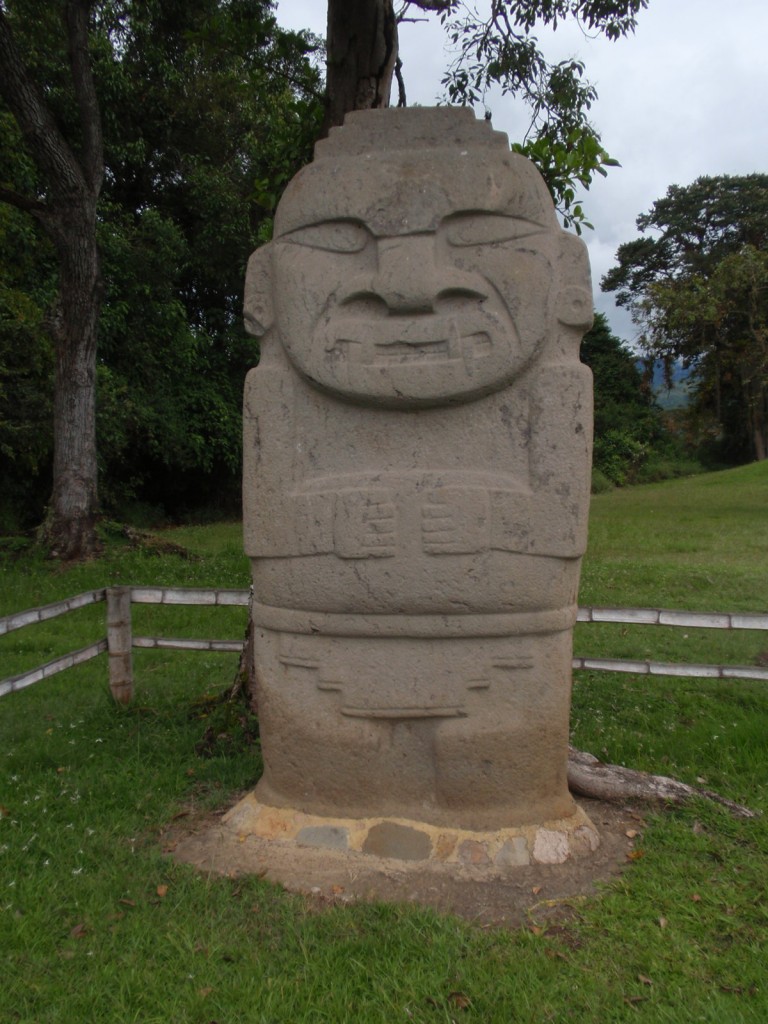 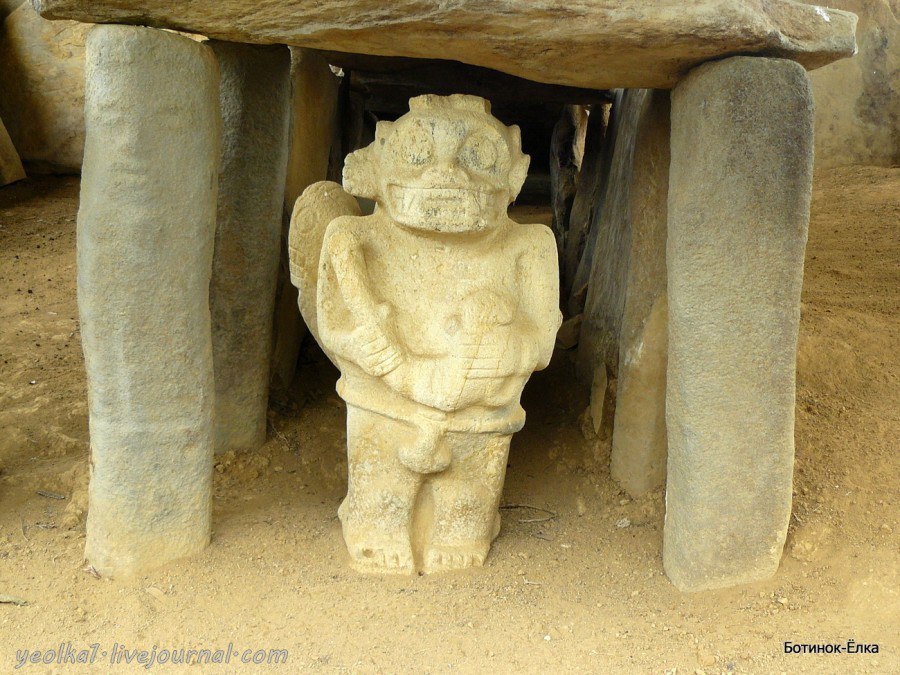 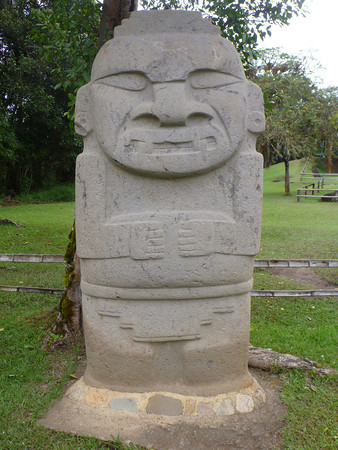 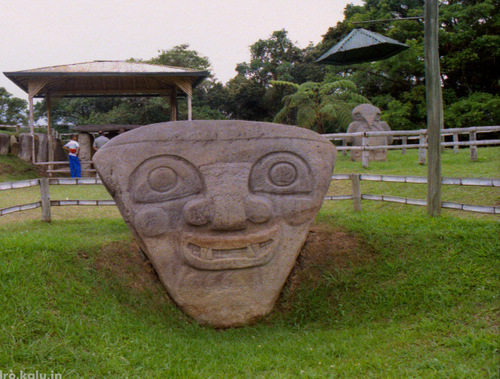 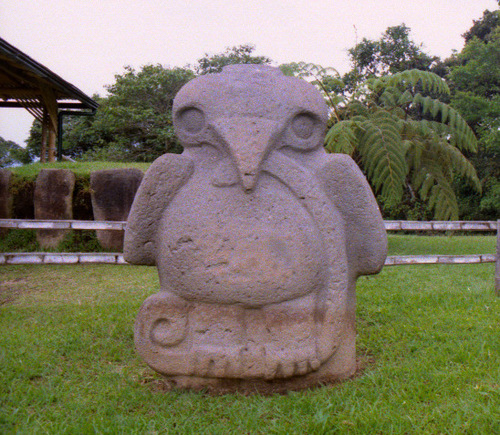 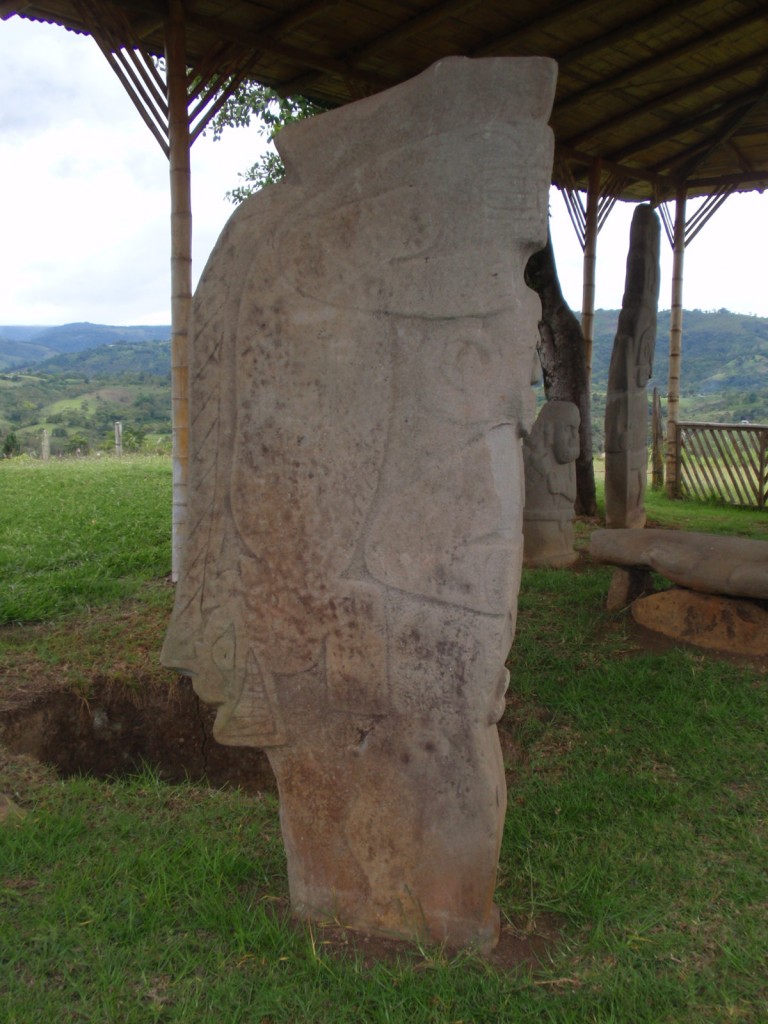 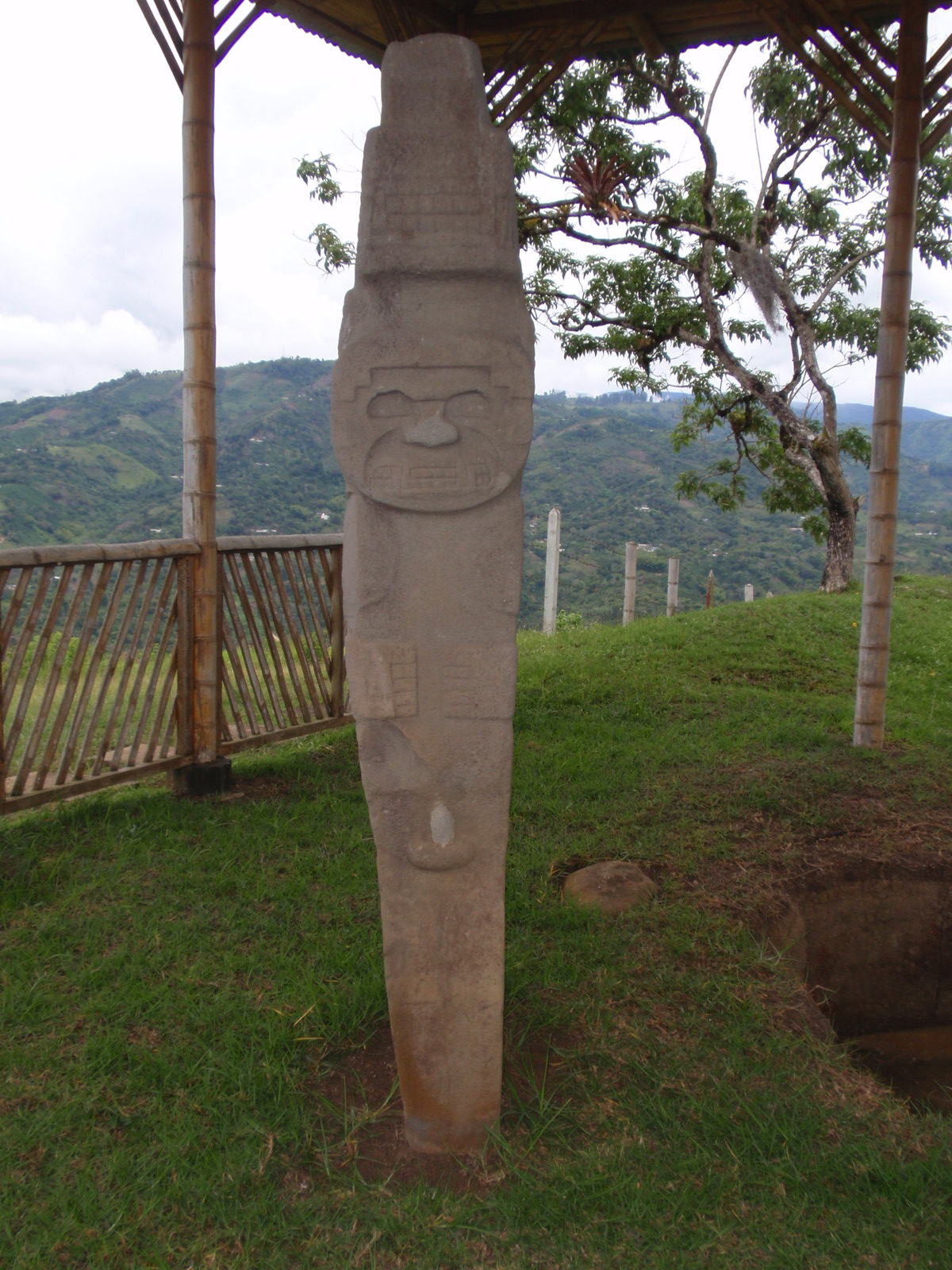 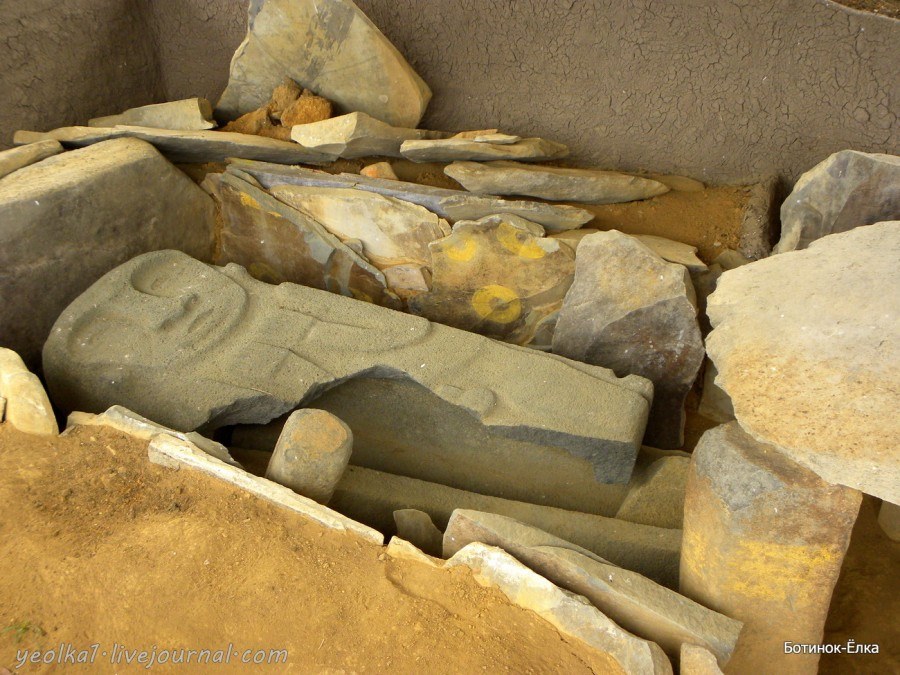 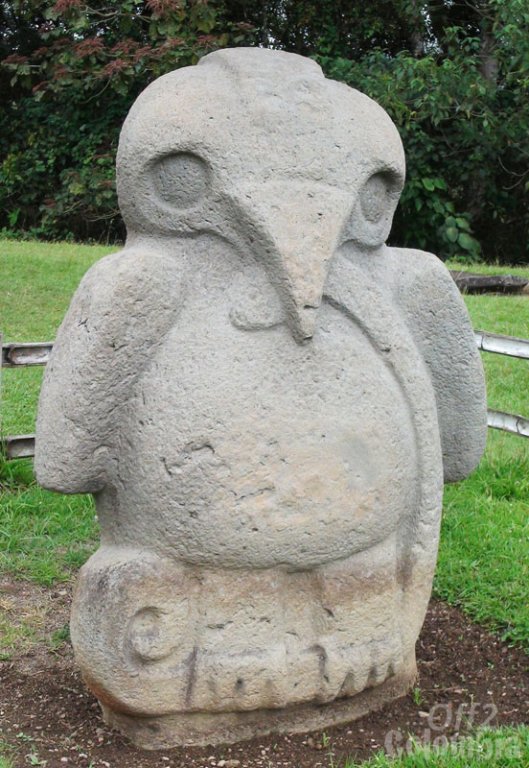 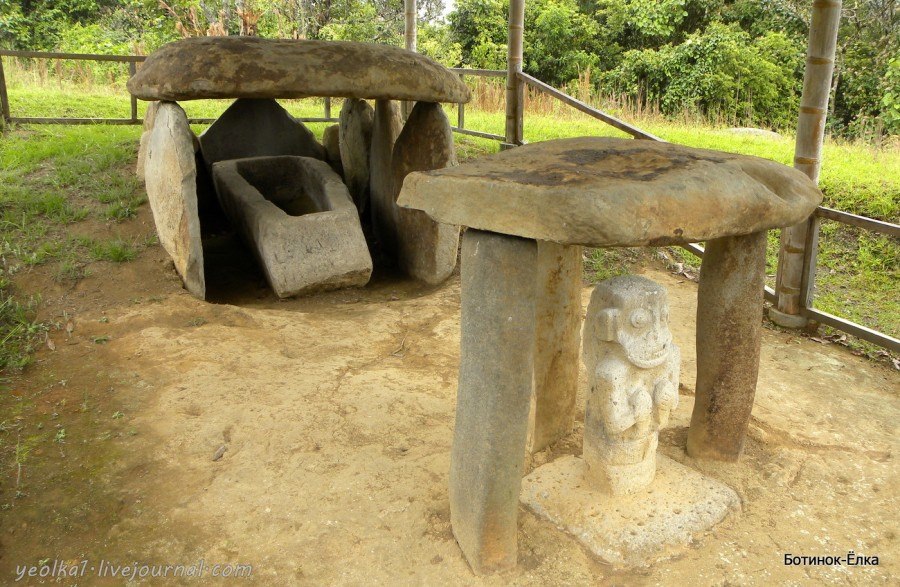 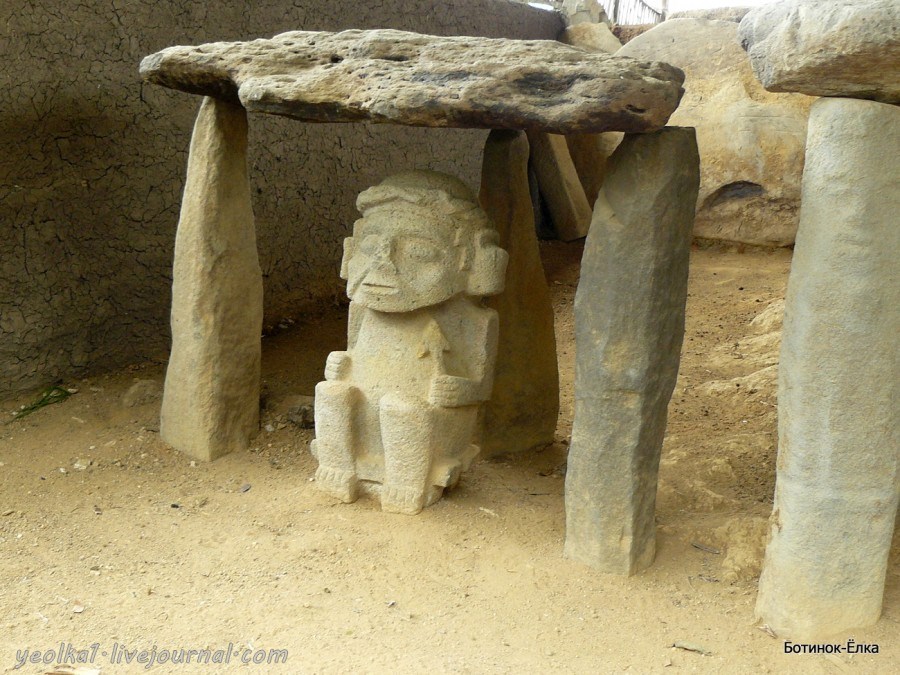 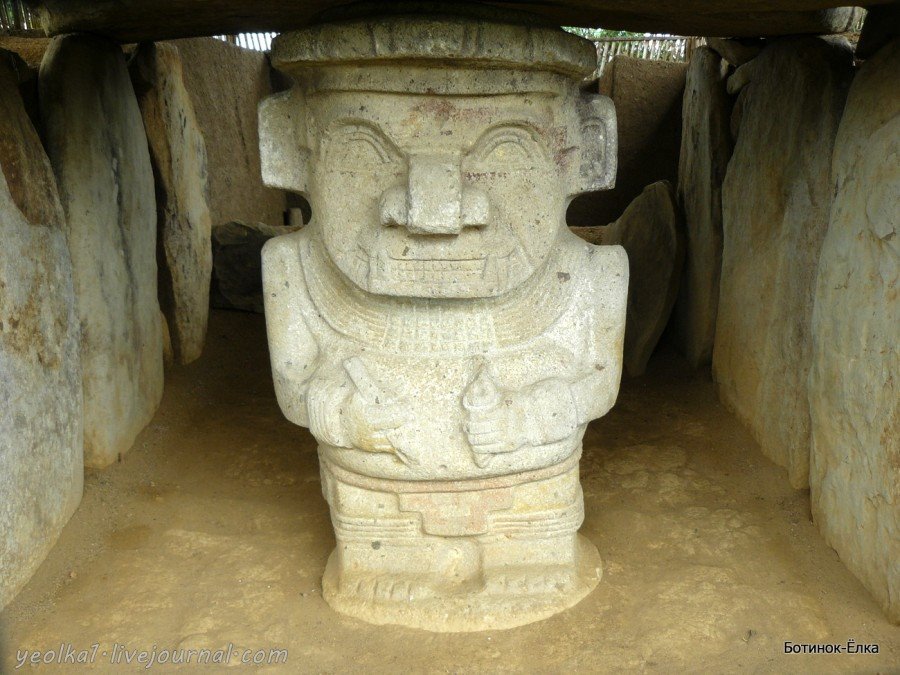 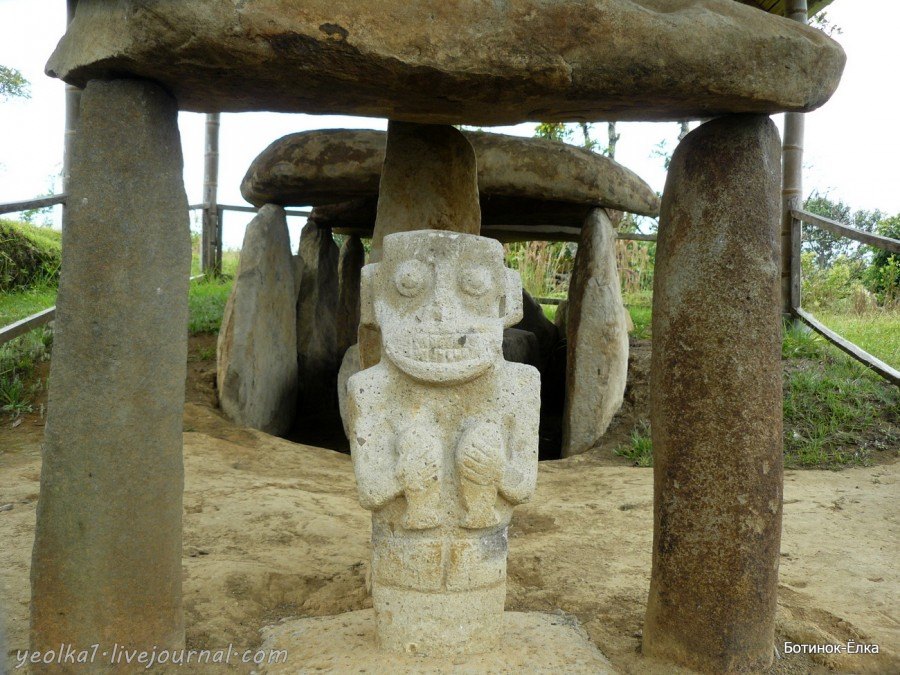 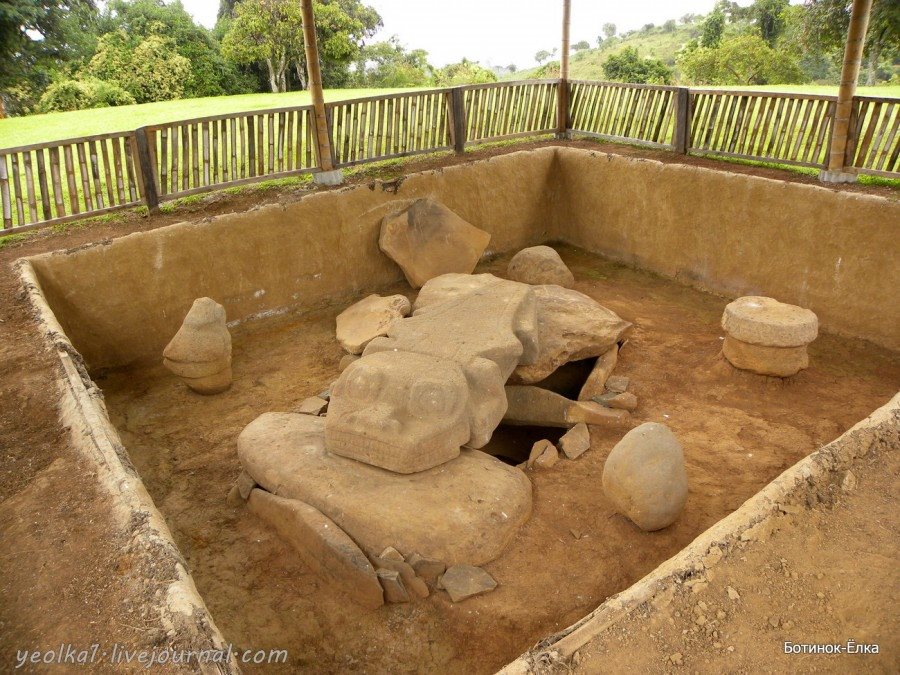 Archaeologists distinguish three types of San augustinski tombs: sarcophagi of wood, burial hills and megalithic tombs underground. High mounds covering the tombs made of massive, slightly flattened slabs of stone, which were carved from solid stone sarcophagi. The peace of the dead protect the stone statues at the entrance. Walls many of the vaults are covered with polychrome geometric ornament. Mythical stories of the murals are reminiscent of the picturesque decorations of temple buildings pre-Inca Mochica culture.

A lot of interesting graves discovered in the archaeological area of Tierradentro (in Spanish inner earth) that most researchers include in San Agustin. Has no analogues tierradentro cemeteries were created between the mid-first Millennium BC and mid first Millennium BC To the present day came tombs on the peaks of the mountain knot Nudo de Pasto. They are the rock-cut step moves. Camera large, round or oval, with vaulted ceilings, separated by pilasters on the walls for a few niches, which have a funerary urn with cremated remains and neatly accompanying the inventory. Walls, pilasters and ceilings with ornaments.

From Tierradentro there are also stone sculptures and vessels of coarse dark nalanie with images of snakes, stamps and rolls. Sanagustin lived a sedentary life, engaged in farming. Like all agricultural peoples of America, they deified the forces of nature. Particular importance was attached to the Sun and moon, linked to the fertility of the soil and crops, agricultural calendar.

In addition to stone monuments and burials in San Agustin found the remains of a round pole dwellings, terraces, ceramic ware, water pipes, carved in the rocks. In the tombs were found gold objects, now stored at the famous gold Museum in Colombia’s capital city Bogota.

The main wealth of the Indians were concentrated in the Holy mountain, discovered in the early XIX century by a famous archeologist and hero of independence from Spain Francisco josé de Caldas.