Stones with triangular symbols from Igarka 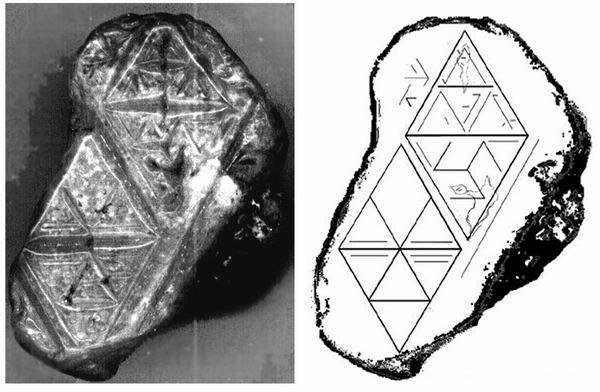 In the Polar Igarka, many fragments of chalcedony have been found that have strange surfaces or a suspiciously even grinding, akin to the current laser, although this material, together with gravel, is extracted from the local quarry, from levels dating from at least 50-150 thousand years.

Among these pieces of quartzite, at least two are obvious artifacts. One of the fragments (in the picture) contains 4 symbols, enclosed in triangles (they are pairwise and sequentially interconnected by internal meaning), the second one is smaller and damaged more – the risks of triangles and internal images are partially read.

Semitransparent fragments of grayish or yellowish-green color (depending on the illumination) bear the traces of thermal impact (explosion? Eruption?) – in any case, there is the impression of a transient process (yellowish-brown color in some corners, melted edges).

An additional roll-up of stones was clearly obtained either on the bottom of the ancient sea, or during the glacial cataclysms. The shade of the stones opens the way to a possible explanation why in the preserved tradition there is a version that the “tablet” of the teacher of the human race was written on a plate of emerald (ie, a mineral of green hues).

As the ancestors say, a small plate fits the “whole wisdom” of the universe. Similar knowledge has reached us in the tablets of Isis, the TARO system is 22 symbols. Based on the size of the fragment found in Igarka, such an amount of triangles can fit freely on a plate 12 x 12 cm!

Specialists in the Hermetic Sciences (named Hermes) are few in the world, but there are enough experts, and they do not have to convince: if the “tablet” of Hermes really existed, then the shortest, deepest, most accessible form for a person is just a group of such triangles , which we see on the fragment. 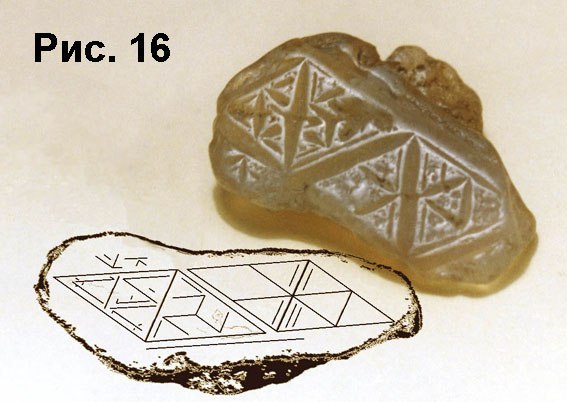 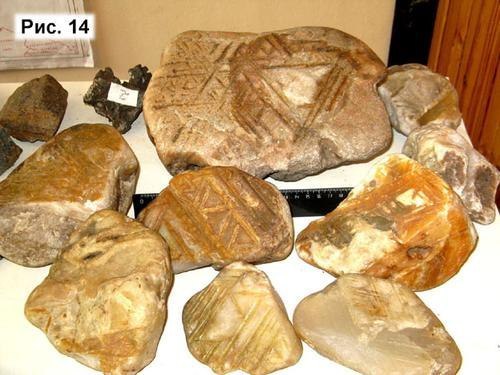 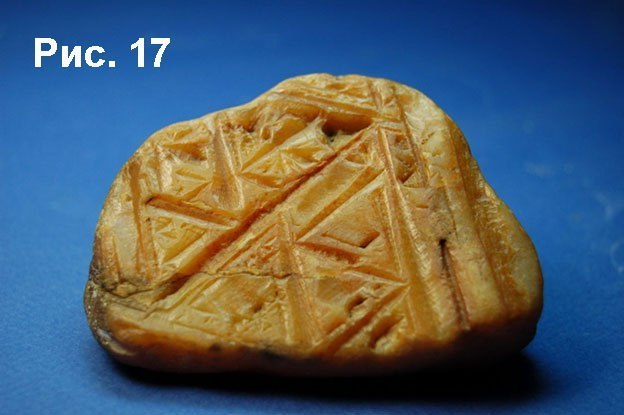 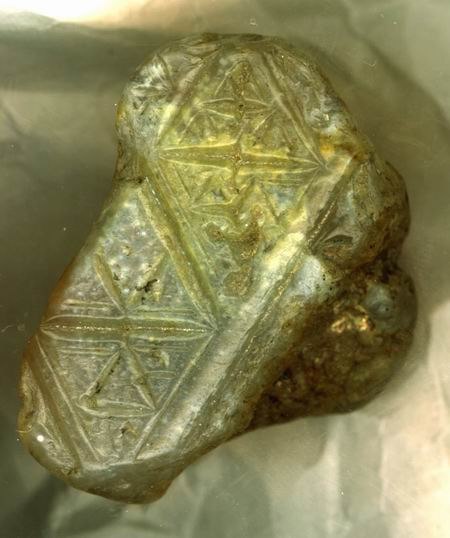 It is possible that near Igarka in ancient times there was a temple (or a complex of temples) where in the encoded for the uninitiated form, literally – in a crystallized form – were stored knowledge of the structure of the universe, or, perhaps, crystals, dotted with images and symbols , were used in ritual actions (we must not forget that quartz and quartzites are used to transmit energy and information, healing, etc.).

Judging by the purity and capacity of the symbols, the three-beam swastika (and not, say, a cross-shaped swastika), this information is much older than the known civilizations, including the Egyptian one. Most likely, it is a matrix with which, for educational or other purposes, impressions were made on clay or similar material (for example, the swastika rays must be “twisted” clockwise).

These symbols, in the form of a ribbon or a geometric figure, could be 22. Then the four triangles on the discovered stone are a fragment of Cosmogony (penetration of the Spirit into Matter, the origin of the Universe). If triangular symbols were enclosed in larger equilateral triangles, then there were two such figures, and the total number of symbols is 36 + 36 (hence the origin of 72 geniuses, 72 angels, 72 God’s names, 72 wise men, etc.). Prisoners in the symbols of knowledge are so ancient and secret that they have become secret for too long.

For example, even the earliest Indian yantras, intended for meditation and cognition of the universe, contain empty triangles and only occasionally text mantras in some (see the figure, in this case there are 36 of them). In such a system, there are no assisting images, and the composition of information emitted to the meditator is dictated by the location of the triangle itself among others.

The deepest and most systematized interpretations on this subject can be found in the writings of V. Shmakov, E. Blavatsky, and the Roerichs. Consciously or accidentally distorted echoes of this symbolism are scattered in Masonic, alchemical, occult literature, encyclopedias and reference books. Now there is evidence that such signs are not a notion of secret societies of past centuries, but a very real inheritance, which we inherited from previous civilizations.