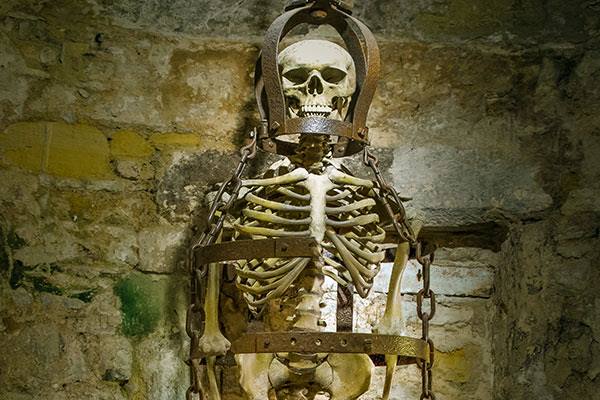 The attention of historians are increasingly attracted to unusual subjects — distant from the Central events, but showing the lives of people and society in a new light. One of these stories recently became exotic British penalty: suspension of the criminal in an iron cage on a high pole. Why was such cruelty necessary?

Why near the gallows arranged festivities? And what’s the progress of medicine, as well as English landscapes? About it it is told in a recent issue of the journal Landscape History.

Hanging in an iron cage or grating (in English- gibbet) was widespread in medieval England, and later in the colonies. Most often this was sentenced thieves, pirates, murderers and thieves of cattle. After the XVI century, in England itself has ceased to hang alive — a punishment, a cross between a torture and execution, was preserved in the Caribbean and the American colonies, where he was subjected slaves.

With high (10 meters and above) a wooden pole with crossbar from the top hung a short chain. To it was attached an iron grid or cage. They were very different — from a simple chain with a collar to complex anthropomorphic designs, retaining all parts of the body. The hope was that the corpse swayed in the wind, emitting a characteristic sound, attracting flies and birds.

Executed in England or in specially designated areas (usually on the outskirts of settlements), or at a hastily knocked together gallows right at the scene of the crime — the locals are glad the retribution. However, for hanging in the cage the dead body after treatment with a special preservative and transported to another place — protected, not to allow accomplices or relatives of the executed to recapture the body.

As is well known to archaeologists, the unusual nature of the burial usually indicates a violent death — as, for example, bog people of Northern Europe the iron age (perpetrators or victims of bloody rituals thrown in swamps), or suspected of witchcraft and vampirism. And in modern times (XVI-XIX century) in conflict with the law are not buried as all — were buried by the roadside, or at a special cemetery, piercing the corpse with a stake and the like.

It is curious that soon enough the desire to revenge the offender and superstitious fears is prepended scientific interest: executed become the main, if not the only source of biological material for the increasingly numerous cases of doctors and teachers of medicine. In England it is the unity of the medieval desire to punish the body of criminal and educational concern for the needs of the science appeared in the “murder Act” of 1752. 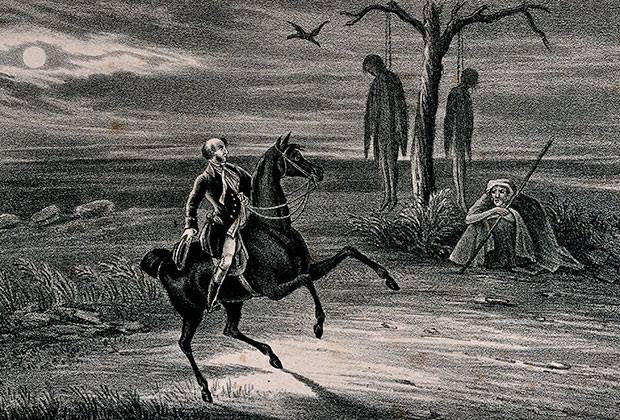 The rampant crime in the country, assassinations, especially in the new metropolis London… the List of crimes for which the death penalty during the eighteenth century increased from 50 to 220 positions, and as a result, the gallows by itself has little Scarecrow. Legislators had to extend punishment beyond death: all those executed were instructed to give or for dissection, or hang in a cage for an indefinite period (and the people of that time the prospect to go under the knife of the anatomist scared a lot more).

Post-mortem the punishment chosen by the judge — and judging by the statistics, most often in favor of the anatomy. In any case, 79 percent of 1151 executed in 1752-1832 years suffered exactly the same fate. According to historians, the suspension in the cell is usually doomed pirates, smugglers, robbers of the stagecoach (that is “personal” enemies of the state). Women criminals is not threatened: their bodies were too rare and always went to the doctors (as well as the bodies of Negroes and the owners of unusual anatomical features).

The picturesque landscape of the execution

But the big thing hanging in the cage as a deterrent and “instructing” people’s punishment was adequate embedding in the local landscape. Often the sentences required to hang the bodies in chains near the scene of the crime — a murder or robbery on the high road. If gibbet put the house of the offender, this show has compounded the grief of relatives and a long time retained a stigma on the family. So, for example, the family of the hanged man under the Coventry in 1734 by Thomas Wilde begged the Sheriff to remove the cage with the corpse, because the memory of his crimes scares the neighbors and does not allow them to do their craft.

In addition, the government achieved the maximum visibility of the corpse: not only that the cage was hung high on a pole, it even tried to put on a hill or other natural elevation — so that it was visible for several kilometers. If the cells at intersections of busy roads served as a warning for robbers by the sea shore — was terrified of pirates and smugglers. 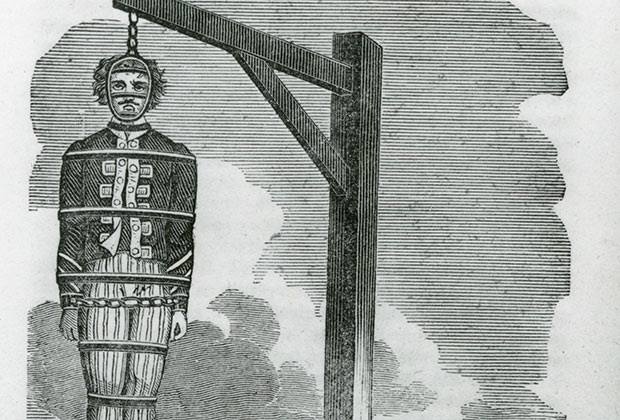 “Admiralty gibbet” in the Thames estuary has seen everything, who had arrived in London by sea. The inhabitants of Portsmouth, for example, well remember John Aitken — a terrorist who committed a series of arson at docks of the Navy from a person fighting for the independence of the American States. A cell with a corpse Aitken (executed him in 1777) stood for many years and has become an important sign of the coast: so, in 1779, a Midshipman Murphy was hanged, and his corpse hacked to pieces and buried under Gibbethon where John the painter, hanging in chains”.

The bodies and gingerbread

Paradoxically, hanging in an iron cage has become a meeting place for three seemingly weakly compatible tasks and moral education (crime prevention), demonstrate the power of the state and folk festivals. To insert a new gibbet flocked tens of thousands of people, and the sheriffs had to allocate quite a lot of people and money to maintain order in the crowd.

So, in 1770, in London hung the bodies of two murderers — Conoway and Richardson. “At the stake set up tents with food and drink, and people were having fun right under the corpses. Someone climbed on gibbet and removed the caps with executed. One guy dared to shout at full throat — “Konoa, we’re often used to light the tube, so let’s do it again” — and climbed up on a pole with two lit tubes, one of which stuck in the mouth of the killer, and the other lit himself, seated on the gallows. Alas, the authorities of that day made no effort,” wrote Metropolitan newspaper.

In 1806 in Lincoln executed Tom Otter, who killed the night after the wedding, his wife (where he was forced to marry government as he seduced her and she gave birth to a child). Celebrations around the cage with the Otter corpse continued for several weeks, beer and gin flowed freely.

All this angered the aristocrats, but contributed to the fact that the stories about the horrible crimes for a long time remained in people’s memory. Many years later, pointing to the pillar with the cage, the locals remembered the capture and the execution of the bandit. But, apart from the moral lessons that could be learned from his unhappy fate, people were drawn to the spine-tingling “scary” story. Recall that it was then, in the late XVIII and the early XIX century, began the “glamor” of crime in the press and literature — and the audience was fascinated by the “shocking and sensational” stories about unusual crimes.

The carnival did not last long, the same pillars with the cage was decorated with English landscape for many years — in the act of 1752 did not indicate the timing of their dismantling. On the durability of structures is indicated by numerous mentions of birds, building their nests among the bones. Over time, some objects become boundary marks (as gibbet John Felton, assassin of Duke of Buckingham), and others have become part of the local place names. In England counted dozens of roads, hills, forests, farms and pubs where the name includes the word gibbet. Usually local people do not remember what criminals these places owe their names. But some places have preserved the memory of ancient murders and regularly put new posts instead of decayed.

The end of public executions

The most faithful to the suspension in the cell was the London Admiralty court (established to fight pirates). Almost to the middle of the NINETEENTH century, so Karal brought from all areas of the Empire and of the pirates of the organizers of the mutiny on the ships. But by the time the aversion to a bloody entertainment gibbet, as well as dictated by the new ideas of hygiene, the fear of rotting corpses overpowered in the public mind from the visible satisfaction that justice is done. So, in 1824, one Londoner has sent a letter to interior Minister Robert Peel, requiring you to immediately remove frightening ladies and foreigners cages with the corpses from the banks of the Thames: “this is repulsive, disgusting, worthy of pity, dishonoured the power of the law and discrediting its performers spectacle.”

Formally exhibit the corpses of the executed in chains and cages was banned in 1834, but two years before that was adopted the Anatomical act, which will allow to open the medical purposes, for the lonely corpses of the poor, and criminals ceased to be the only “resource” of health workers. Finally, in the nineteenth century changed the public philosophy of justice: discipline and re-education was considered a more effective means of combating crime than awesome execution.