That hides a mysterious and indecipherable Voynich manuscript 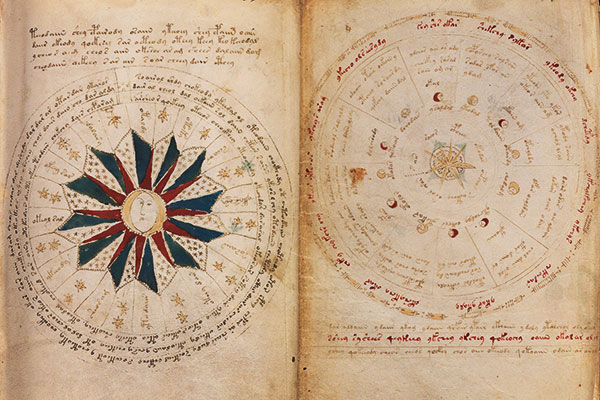 The Voynich manuscript is a medieval work written in the fifteenth century by unknown authors. To solve her riddle researchers are trying for several hundred years: the language of the manuscript are unknown. Some even suggest that it was created by aliens. Recently Siloe Spanish publisher decided to release the exact physical copy of the book to help scientists and enthusiasts who are unable to access the original. .” tells the story of the manuscript and attempts decryption.

In 1912, the antiquarian Wilfred Voynich found in the ancient South-European castle Villa Mondragone strange manuscript: the text was written in a strange language with his writing.

Elegant letters on the pages of the manuscript meandered coupled to and disagreeing with each other. Some of them later called “gallows” for visual similarity with the scaffold. Book adorned with numerous illustrations images of plants, people, natural phenomena and celestial movements.

It is now believed that the manuscript he worked from two to eight scribes within a few years, but Voynich came to a different conclusion. He found in the book a letter to the Czech scientist Johannes Marcus Marci, on the basis of which concluded that it is the work of the famous philosopher and scientist Roger bacon, who lived in the XIII century. Voynich decided that for this piece of antiquity will give a lot of money, but with the date wrong number. According to the later radiocarbon Dating, the manuscript was made between 1404 and 1438 years, and thus bacon could not have any relation to it. However, the story of this manuscript is much more interesting than was the Voynich.

Not only the manuscript, but also the identity of its owner is still partly obscured by mystery. About 10 years ago, a researcher Rene Zandbergen found in the archives a letter, dated from XVII century, which is sent to the Prague alchemist Georg Baresh. It turned out that he more than 20 years unsuccessfully trying to decipher the language of this work.

Desperate Bares sent several pages of the manuscript to the Jesuit scholar Athanasius Kircher, who lived in Rome. Old book interested Kircher, and he tried to convince the alchemist to send him the entire work, but he refused. 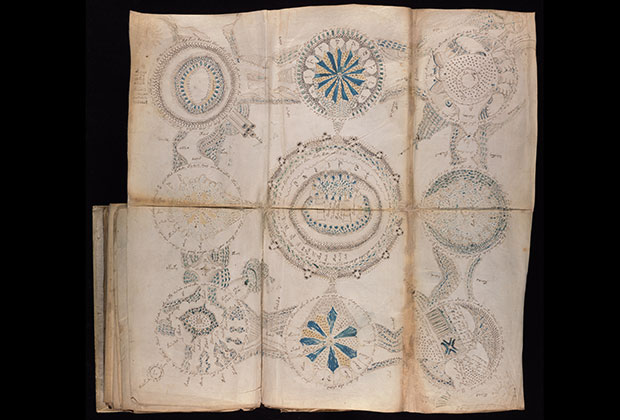 After the death of Baresa, the manuscript passed to his friend, the same one a g, a letter which Voynich found. Marci was a famous scientist of his time and served as a physician at the court of Holy Roman Emperor. In the letter he talked about obsession of his friend by the decoding of the manuscript, which he had dedicated his life.

About made whether Bares in this field some success, is unknown, but after his death the book three centuries has lain in the vaults of the Jesuits. In times of persecution of the Church in the order of the moved manuscript in the personal library of his head, Peter Bex — otherwise it could be confiscated. In the XIX and XX centuries, Villa Mondragone has been the headquarters of the Jesuits, it is not surprising that Voynich found the manuscript there.

But initially this Voynich did not know. Being sure that the manuscript is from the pen of Roger bacon, he gave the work to the cryptographer, Professor of philosophy, University of Pennsylvania William Newbold. His fate similar to the fate of Barasa: he devoted to the search of clues of language books the last years of his life. Method Newbold was the fact that he studied the text under a magnifying glass, and then tried to reproduce on paper a separate stroke of the pen, for which, as it seemed, was hidden anagrams. Of course, it never happened.

Theory Newbold smashed to smithereens William Friedman, the first cryptologist of the national security Agency of the United States. In the last days of the Second world war he and his wife, Elizabeth Friedman have assembled a team of experts and devoted a huge amount of time trying to decipher the Voynich manuscript. As a result, they concluded that the book does not contain anagrams, and its language is artificial — that is, it was invented specifically for the manuscript.

Subsequently, there have been many theories that the manuscript was a fake, written on ancient sheets of parchment. Of course, such a possibility cannot be ruled out, but it would be very strange if the alleged hoaxer has found 120 sheets of parchment of the fifteenth century, and even did it in those days, when radiocarbon analysis no one has heard before. Does not hold and the assumption that the text of the work is meaningless: it has a clear structure. For example, in the section devoted to plants, used some specific words and in astronomy — other, and they are not repeated. 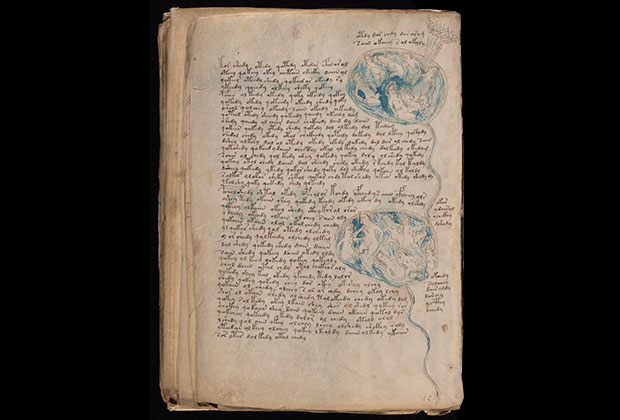 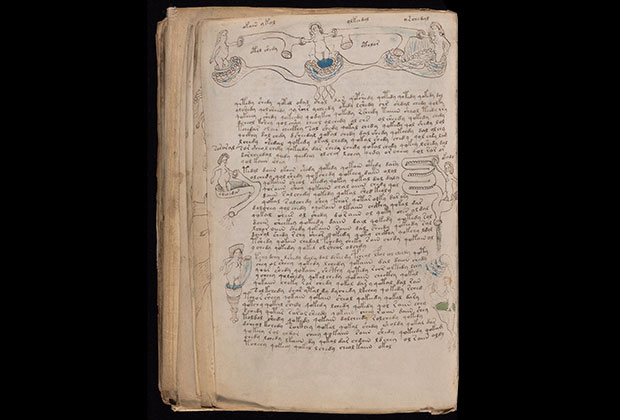 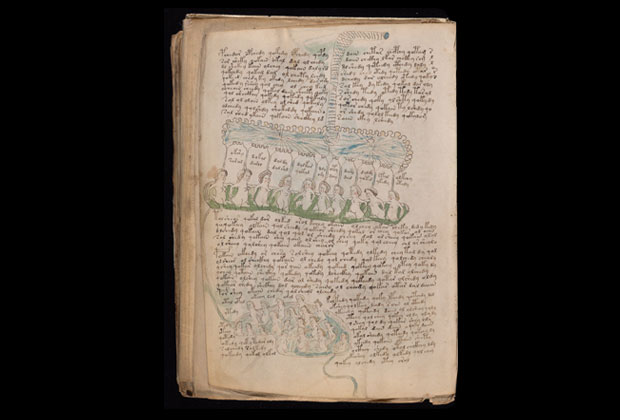 There were many theories about what constitutes the language of the manuscript. Joseph Martin feely argued that the text is written in Latin and encrypted with a simple shift of letters. Researcher John Stojko wrote in his book that the manuscript is written in the Ukrainian language, without vowels, and Dr. Leo Levitov believed that this is one of the Creole languages. However, none of the professionals did not come close enough to understanding the text of the manuscript.

In 2013, physicist Marcelo Montemurro, from the University of Manchester published a paper which confirmed the theory that the text of the Voynich manuscript is not a meaningless set of characters, it really is a message in a forgotten language. He used one of the techniques designed to study encoding of information in the process of neurons, this method allowed to identify in the signal an important data even though it was not known how to interpret them.

In an interview with  Montemurro said that the more he studied the statistical features of the text, the more levels the structure of an unknown language in it. The researcher also rejected the hypothesis that information in the manuscript is encrypted because the strong ciphers have the important property: they destroy the statistical features of language in order to exclude the opportunity to know him.

Montemurro, drew attention to the fact that the Voynich manuscript obeys the Zipf’s law, which describes the statistics of frequency of occurrence of words in natural languages. If we arrange the words in descending order of usage frequency, the repetition frequency of each word will be inversely proportional to its ordinal position in the list. In principle, to develop the encryption algorithm which allows to follow this rule, you can, but it will be extremely difficult, and it is unclear who, how and why would to do that in the XV century, when the law no one knew.

In addition, Montemurro pointed out that the analysis of the text they identified a pattern: the repetition of certain specific words coincides with the sections of the book. That is, if the illustrations are located on specific pages, depict plants, they will be accompanied by related vocabulary. 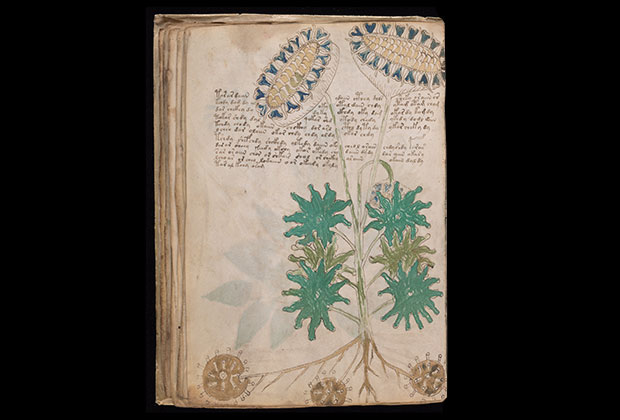 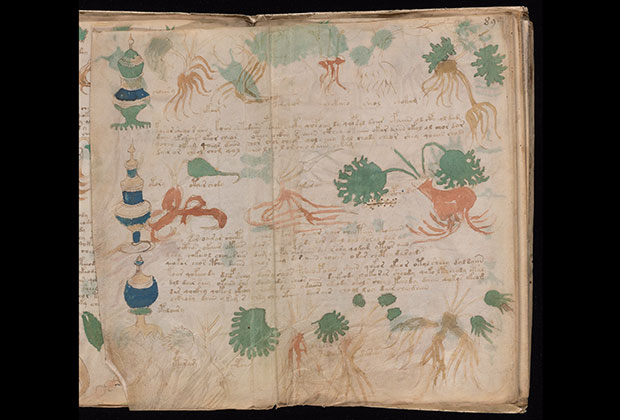 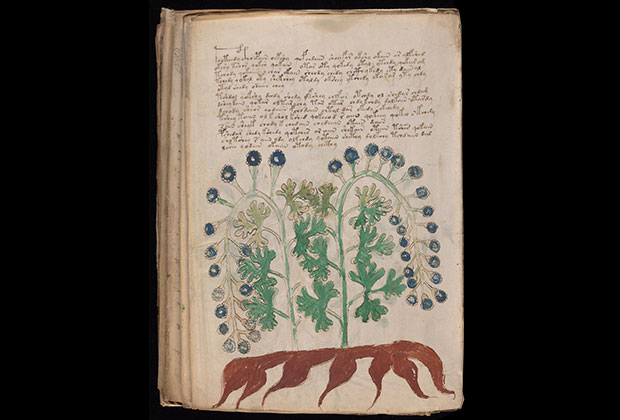 Intellectuals lost culture
Stephen Bax, Professor of applied linguistics at the University of Bedford, introduced in 2014, its strong evidence that the Voynich manuscript cannot be a forgery. He argued that, according to the results of the study, the text of this work coincides with the illustrations. For example, in the Botanical section tells about drawn to her plants, and perhaps also explains their medicinal properties. Buck claimed that they were all described in earlier studies. “In short, the manuscript is most likely not a coded message is hidden in which information of a different kind”, — he concluded.

On the basis of illustrations, the researcher was able to identify some of the words occurring in this work, isolating the oft-repeated sequence. So, he found the constellation Taurus, juniper, coriander, hellebore, cornflower and Nigella seed. Of course, these findings do not strongly brought Bucks to the deciphering of the language of the manuscript, as he could only understand the meaning of some words in modern English.

In addition, the Professor put forward an interesting theory about where did the mysterious language. He believes that it is spoken by some small community, not to develop your own letter. A group of intellectuals belonging to this culture, has created the alphabet consisting of the elements of European, middle Eastern and Caucasian writing to keep the knowledge of his people on the nature for posterity. Bax indicates that the XV century was a time of troubles, and, quite possibly, the culture that used the language, disappeared about the same time, when these people tried to develop her writing.

In 2014, Professor at the Brazilian University of Sao Paulo, Diego Amancio using “big data” (a set of technologies and approaches for automatic analysis of extremely large amounts of information) has also received confirmation that the Voynich manuscript is not a forgery. Research scientist showed that the structure of an unknown language coincides with the contemporary structures. 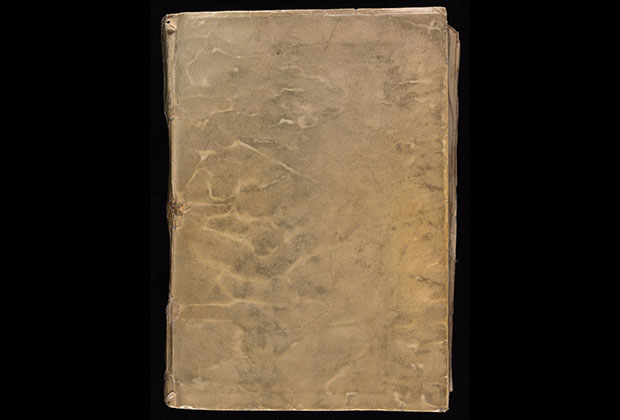 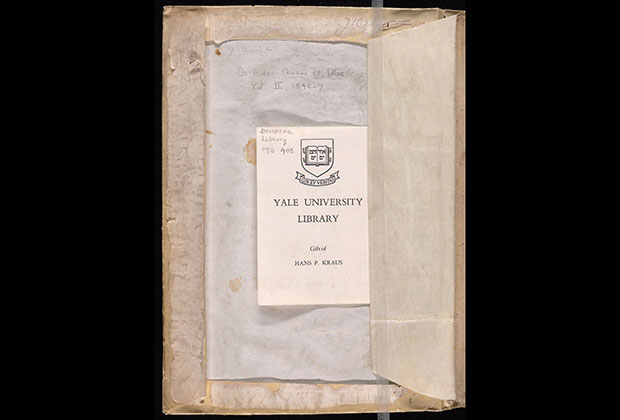 Amancio did not try to translate the text he just put together words in groups and analyzed the relationship between them, modeling a complex network. As a result, he found that in 90 percent of cases, the structure of the text of the manuscript repeats found in the Bible and other prominent books.

In addition, the Professor discovered terms that are often repeated in the document and associated letters of an unknown language from Latin (for example, he received words like cthy, gokeedy and shedy). To establish their value, he failed, but he didn’t try very hard to do, considering that his work will serve as a Foundation for studies of cryptographers.

In assessing the content of the manuscript he agrees with many other experts. In his opinion, the document is an encyclopedia of medieval practices, which include medical recipes, astrological and metaphysical information, as well as a description of the rites of fertility.
* * *

The results of recent studies allow us to say with considerable certainty that the manuscript is indeed written in real language, not a fake and the message, enclosed in it, is not encrypted. However, the Voynich manuscript remains a mystery still, yielding to analysis, but not giving the meaning of written.