The ancient Sumerians had contact with aliens and traveling in space 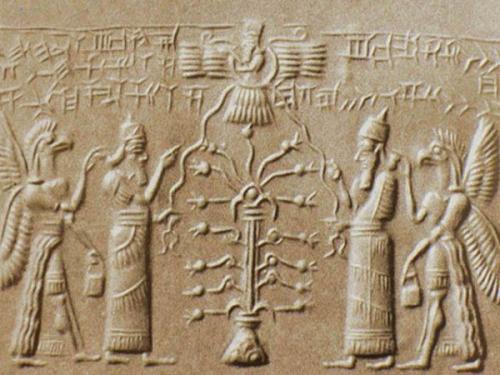 The Minister of transport of Iraq Kazem, Finjan claims that the ancient Sumerians who lived in Iraq were travelling in space and they found Pluto 5,000 years ago.

This sensational statement, Finjan made during a press conference in the southern Iraqi province of DHI QAR. In his speech he said that the ancient civilization of the Sumerians built the world’s first space airport (spaceport), even 5000 years BC.

Minister Finjan claims that the Sumerians had technology which allowed them to make space travel and found in the Sumerian tablets indicates the location of Pluto, the existence of which the Sumerians knew long before his subsequent discoveries.

In fact, the transport Minister of Iraq said about what you long to say everything. in addition to official science. There is ample evidence that the Sumerians had an advanced technology and interacted with a race of aliens called the Anunnaki.

Official science believes that the Sumerian civilization originated in Mesopotamia in what is now Iraq, about 6000 years BC, as evidenced by the records of the Sumerians. previously it was thought that they appeared around 4000 years BC. For scientists is a mystery, where the Sumerians got their knowledge of mathematics and astronomy. But the answers can be found if you explore the legacy of the Sumerians rejecting the established scientific dogma.

Whence came the Sumerians – according to their legends they came “from the sea”, East or South-East. Its ancient city they called Eridu, the most southern city of Mesopotamia, now the mound of Abu-Sahran. The mystery remains, and the Sumerian language, because scientists are still failed to establish his relationship with any known language families.

According to Sumerian mythology, a crucial role in the origin of their civilization played a powerful being, half fish-man by the name of Oannes. Here is what says about his role in the early history of the Sumerians priest of the temple of the God Marduk:

“…At first the Sumerians lived in great need and had over him no power, like a wild beast. But there was a creature, possessed of the human mind, which they called Oannes. Oannes emerged from the Eritrean sea, in the place where it is adjacent to Babylonia. His body was the body of the fish, but over the fish head was a human head and fish tail was seen by human feet. His voice was the same as in people, but people still remembers. He spent whole days among people without eating explained to them how to use letters, taught them the ability to do different things to build houses, cities and temples, measure and cultivate land, sow and harvest and gave them everything that makes life comfortable and pleasant”.

Interestingly, the Oannes could not eat the food that ate people, and at night returned to the depths of the sea, because he knew how to breathe under water. It can be assumed that the Oannes and his people were or the inhabitants of Atlantis or aliens.

In the course of numerous excavations it was discovered many Sumerian seals, which represent the stone cylinders height from 1 to 6 cm, often with holes, what would these seals could be worn. 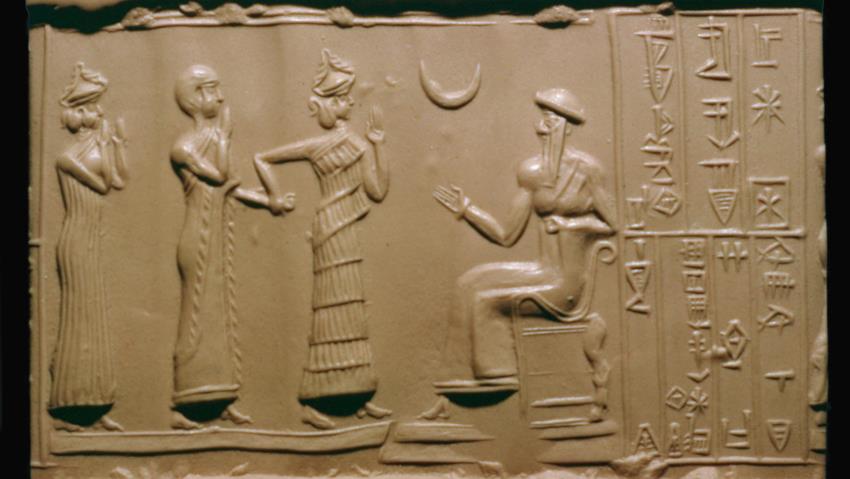 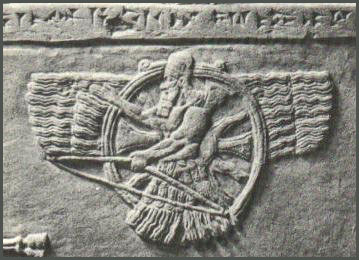 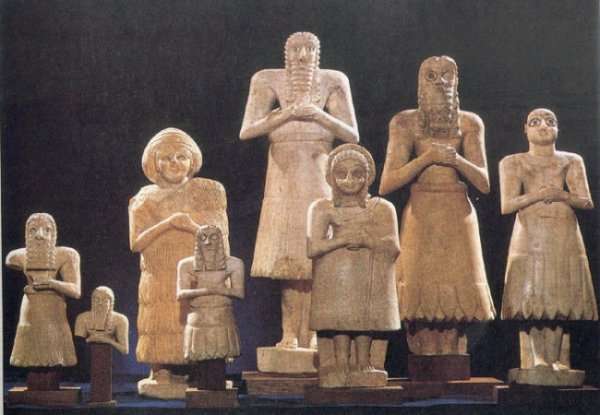 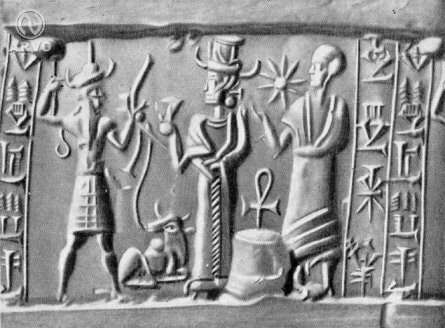 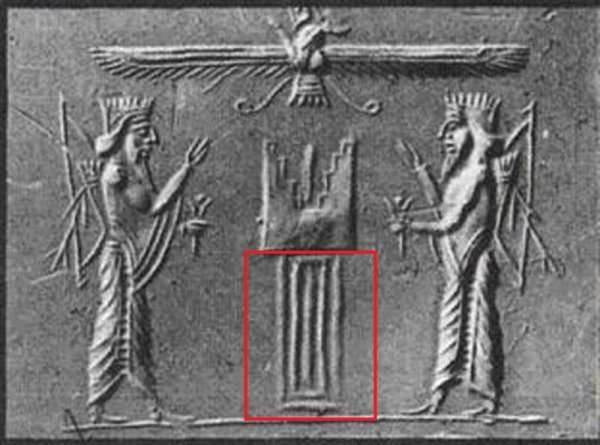 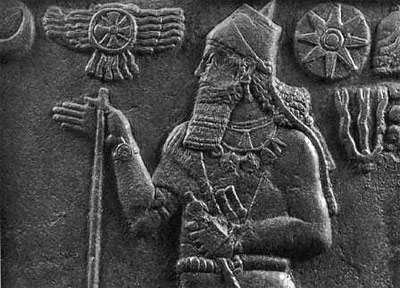 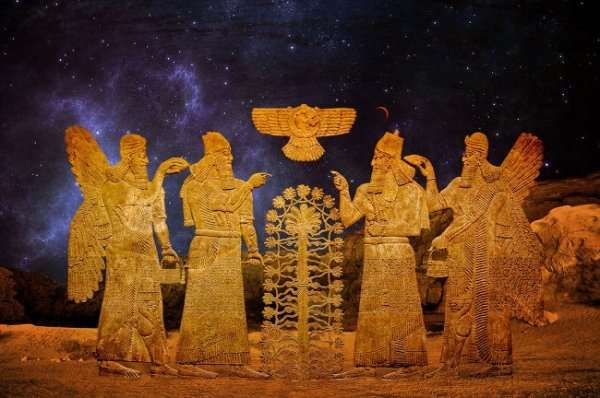 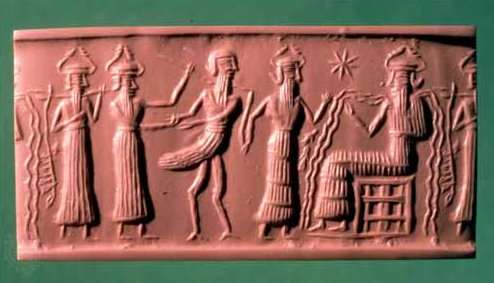 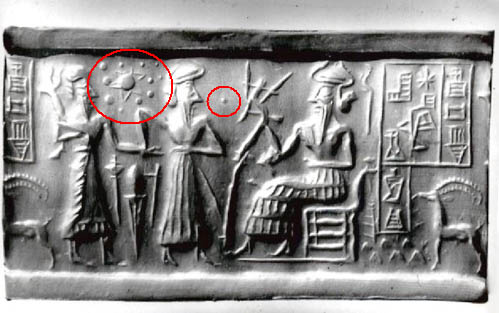 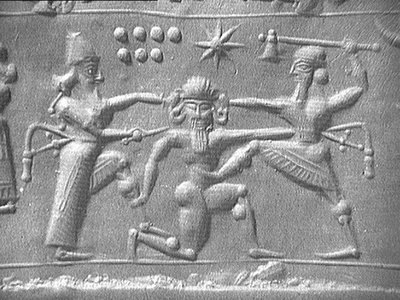 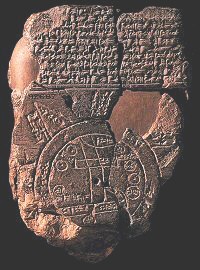 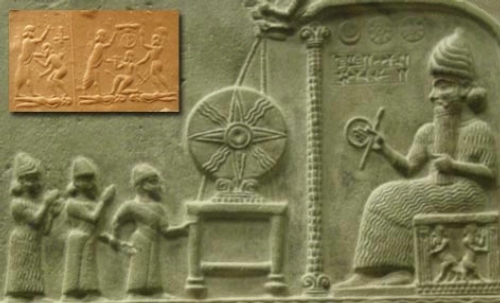 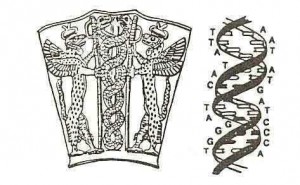 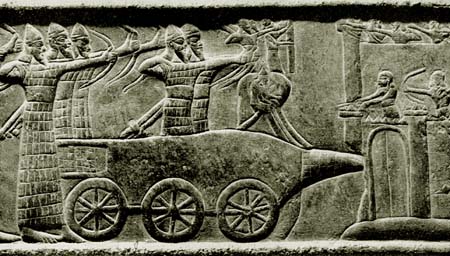 On the work surface seals carved inscriptions (mirroring), and drawings. Among these seals was discovered a real manual to space flight. Describes how cipag includes instrument landing system starts brake motors and lead ship over the mountains to the spaceport. The flight path between their native planet astronauts Madoka and Earth passes between Jupiter and Mars. This is described in the two sectors of printing, and the third is the order of actions of the crew during landing on the Ground. Here there is the indication that “landing controls the deity of nine”. The fourth section contains information on how to navigate by the stars during the flight to the Ground, and then, while over its surface, steer the ship to the landing site, guided by the terrain.

This memory card is specified a timetable for the implementation of the successive stages of a landing spacecraft, the time and place of passing the upper and lower layers of the atmosphere, the inclusion of brake motors, marked with mountains and cities on which we should fly, and the location of the spaceport where the ship needs to land. All data are accompanied by a number of integers that contains probably the data about the height and speed of flight that should be followed when performing the above steps.

According cuneiform tablets of the Sumerians, aliens from other planets used for flights over Land air corridor that stretches above the swimming pool of the Tigris and Euphrates. While on the surface this corridor was designated a number of points that served as “signposts”, which could be guided and, if necessary, to adjust the parameters of the flight crew coming in for a landing spacecraft. The most important of these points was, of course, mount Ararat, towering more than 5000 meters above sea level. If you draw a line on the map, going from Ararat strictly to the South, it will intersect with the imaginary axis line mentioned air corridor at an angle of 45 degrees. At the point of intersection of these lines was the Sumerian city Sitmar (literally “City of Birds”). Here and there was an ancient spaceport, on which sat and which flew ships “guests” from the planet Marduk.

To the South-East of the city, along the centerline of the air corridor, ending over the marshes of the then Persian Gulf, strictly on the centerline or with a small (6°) deviations from it, at the same distance from each other was located a number of other checkpoints

I have a guess as to where the Sumerians came from, which is inclusive of another guess. Geologists have demonstrated that the Persian Gulf was a rich fertile valley, dry other than its abundant rivers as recently as 17000 YBP and then between 8000-7800 YBP it flooded. Perhaps this was the place (and would have been ideal at the time) for the original ancient cities of what would then been an advanced human civilization. After the “great flood,” the survivors migrated north until they escaped the flooded paradise valley they had lived in for millenia (perhaps passing that down in racial memory as Eden), bringing to a newfound city of refugees with their existing language and other knowledge at Eridu in 7500 YBP. The dots all connect and are plausible. Were those human refugees first taught civilization by aliens? Perhaps, but that is another question altogether.