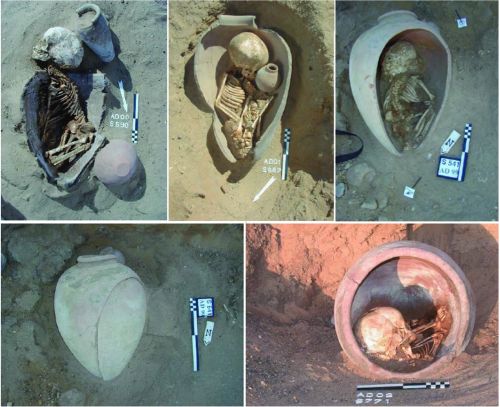 In approximately 3500 BC the ancient Egyptians began to practice burial of the dead in ceramic pots, which resembled a Greek amphora. So were buried mainly children, newborns and premature babies, however, there were cases when a similar thing they did with the bodies of adults.

This tradition has put many researchers in a deadlock. Spoken version that the burial of the dead in the pots was due to financial difficulties of the family. In other words, the poor could not afford to conduct the same rituals that rich. Now, however, archaeologists challenged this assertion. Their findings were published in the journal Antiquity.

Scientists believe that the poor inhabitants of Ancient Egypt ceramic pots were valued, and they are unlikely to want to part with them. But more importantly, the researchers drew attention to the fact that the words “pot” and “womb” are designated by the same characters. So the burial of children in the pots probably had a ritual meaning, where the ceramic piece was supposed to symbolize the womb. Probably for the ancient Egyptians this ritual tradition was another way to maintain the connection between the world of the living and the world of the dead.

Experts drew attention to the wall of an Egyptian tomb, where you can see people in a ritual dance. Characters that complement the image, mention the words “pot”, “egg” and “the secret of birth”. Further evidence of the symbolic value of such burial is that the deceased was located in the form of the embryo.

The character for the word “pot” and “womb”

Predynastic period (end of V th. 3100 BC) is considered the last prehistoric period in Egypt. In this era finally break up tribal relations and formed the first Egyptian slave state.

Earlier, reported the discovery in the historical region of Upper Egypt the lost city and the cemetery, built, according to historians, 5316 BC