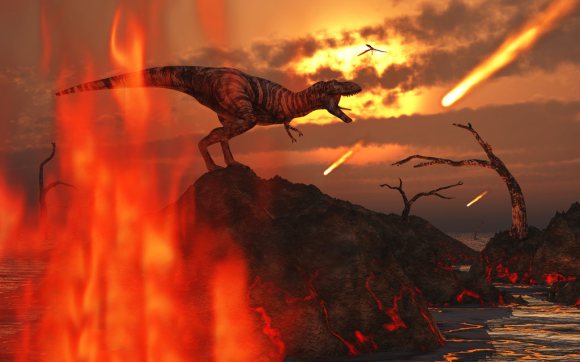 A group of American scientists has discovered new details of one of the largest natural disasters in the history of our planet, which occurred 66 million years ago. According to them, then as a result of a collision with an asteroid, our planet lost sunlight for two years, and more than three-quarters of the animal species that inhabited it, including dinosaurs, died out. Excerpts from the scientific work are published by the portal Phys.org.

Employees of the National Center for Atmospheric Research (NCAR), with the support of NASA and the University of Colorado in Boulder, modeled on the computer what the Earth could look like at the end of the Cretaceous period shortly before the asteroid crashed into that part of the planet now known as the Yucatan Peninsula.

After they added to this model 15 billion tons of soot – this is the number, according to the latest estimates, was released during the large-scale fires that swept the greater part of the planet. Heated by the sun, solid particles rose higher and higher into the atmosphere, eventually forming a global barrier that blocked most of the sunlight.

– At first it was as dark as a moonlit night, – explained one of the authors of the study Owen Tun.

Computer simulations have shown that for almost two years photosynthesis on the Earth was impossible. Since many terrestrial plants had already been burned by fires, the darkness most likely affected the phytoplankton underlying the food chain of the ocean. This led to the death of most of the marine life organisms.

In addition, it was found that the loss of sunlight led to a significant drop in temperature on our planet: on land, it fell immediately by 28 degrees Celsius, and over the oceans – by 11.

At the same time, in the upper layers of the atmosphere, the temperature, on the contrary, increased, because the soot particles flying there absorbed sunlight. As a result, it led to the destruction of the ozone layer, which subsequently allowed large doses of radiation to reach the Earth’s surface and aggravate the situation on it.

It is noteworthy that even a three-fold decrease in the amount of soot would have catastrophic consequences for the planet – photosynthesis would not occur within a year.

“Most large animals on land would die almost instantly, but animals that lived underground or in the oceans could survive.” We wanted to study the long-term effects of fires and emissions of a huge amount of soot and how they affected the surviving animals, “explained the study’s head Charles Bardeen of NCAR.

Scientific work can be useful for other types of research, including modeling the “nuclear winter” scenarios, since an explosion of nuclear weapons can lead to the release of a large amount of soot into the atmosphere.