The Battle of the Chinese with the Romans 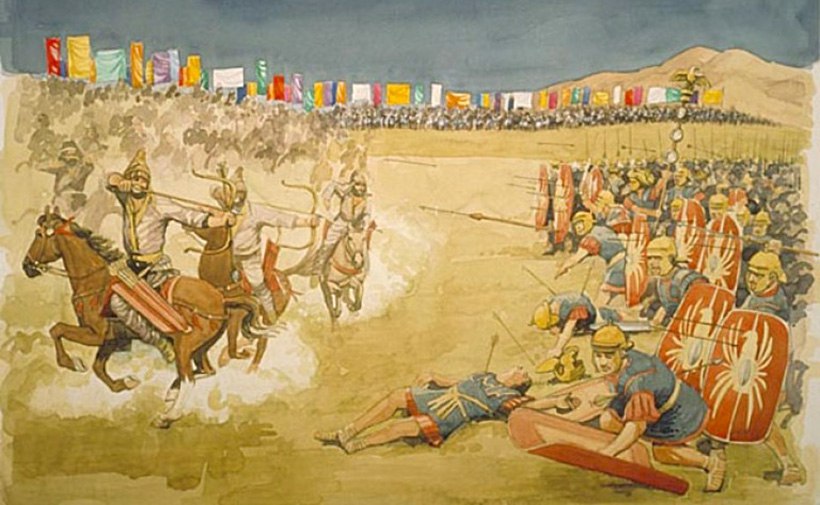 This case, if you agree with some arguments, is really unique. The uniqueness lies in the only recorded case in history when Roman soldiers collided with the Chinese during the Talas battle of 36 BC, between the Huns defending the fortress and the forces of the Han Empire (including its allies).

Before answering this question, let us briefly mention the battle itself. A Chinese military man named Chen Tan organized a campaign against the tired Hunnish leader Zhizhi, who not only was going to create his own kingdom in Asia and got all the Chinese, he also killed an official ambassador, and such things could not be forgiven.

Zhizhi built a fortress in two years, where he was at the time of the arrival of Chen Tan, who took her by storm. The Huns even tried to make sorties, but the Chinese crossbowmen knew their business well, and forays of success did not bring. As Chen Tang himself reported to the emperor, during the attack the gates of the fortress were defended by a detachment (numbering more than a hundred) soldiers who were built by “fish scales”. In addition, it is important to pay attention to the message of sources that the fortress was protected by a double palisade, a moat with water and bridges.

Immediately say that the fortress was taken, Zhizhi was killed, and with it a large number of people. In addition, more than 100 people were taken prisoner.

It would seem, and where are the Romans? And here’s the thing. English Sinologist (Sinologist, if you will) Homer G. Debs drew attention to the fact that the fortress was defended by a hundred fighters built in the form of “fish scales” and related it to the Roman way of construction called “turtle”. In his work, he pointed to the unlikely use of this technique by local fighters, since the construction of a “turtle” requires a clear coherence of actions and training.

Another indirect sign, which draws attention in his work Homer G. Debs, is the fortification of the fortress, the description of which coincides with the Roman.

Quite fair is the version of where the Roman detachment came from in those places. The fact is that in 53 BC. (17 years before the Talas battle), the Battle of Carrah took place, in which the troops of Mark Licinius Crassus suffered a crushing defeat from the Parthians. A significant part of the Romans was taken prisoner, and then sent to Margiana to protect the eastern borders of the Parthian state. It was in these parts that the battle described above took place.

What happened to the detachment after the battle is not known. It is obvious only that they either perished in the number of many, or sent further to the east in the number of 145 prisoners.