The Borobudur Temple Complex in Indonesia 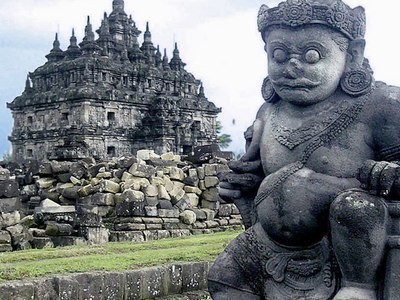 The Borobudur Temple complex is located 42 km north-west of the city of Yogyakarta, the capital of Central Java, and is the national pride of Indonesia. Borobudur is the largest monumental structure of the Southern Hemisphere, the third of the Buddhist-Hindu temple complexes in the world in size after Angkor Wat in Cambodia and Shwedagon in Burma.

In the 7th-8th centuries, when Indonesia was strongly influenced by Indian culture, Buddhism became widespread in Central Java. And about 800 years, in the era of the Sailendar dynasty, the construction of the complex began.

The architectural design of the builders of the temple corresponds to the system of Buddhist worldview. In its type, the temple resembles a Buddhist stupa, however, a structure in which a square multistage base plays a special role, reproducing the Buddhist model of the world – the mandala.

The central motif of Borobudur is the sacred mountain Meru – the legendary center of the universe in ancient Indian mythology. The foundation of the stupa is square, with a side of 118 m. The stupa has eight tiers: the five lower ones are square (symbolize the lower world), and the three upper ones are round (symbolize the upper, spiritual world). On the upper tier there are 72 small stupas around a large central – gold, with a diameter of 15 m and a height of 8 m, symbolizing the golden peak of Mount Meru. Each stupa in the form of a bell. Inside the stupas there are 504 Buddha statues and 1460 bas-reliefs on religious subjects.

The “procession road” about 5 km long leads to the top of the temple in a spiral, consistently bypassing all eight terraces. This spiral winds from right to left (motion from left to right means the path to evil). To the top of the temple lead steep stairs, in the middle of each of their four sides. The high-rise gates with pointed arches in the upper part form an entrance to each subsequent terrace. On the upper terraces are several rows of trellised stone stupas. Inside, they are hollow, and in each of them is stored a figure of Buddha carved from stone. The positions of the hands of the figures – mudra – correspond to the different positions and symbols of the Buddhist teachings.

The pilgrim on the way from the lower steps to the upper “comprehends the truth”: before him as the movement from the foot of the temple to the ensemble leading ensemble the main stupa unfolds the story of life and teachings of the Buddha, illustrated by more than 1500 stone carved sculptures, reliefs and Buddhist symbols. Three levels symbolize three areas of residence – Kamadhatu (sphere of passions), Rupadhata (sphere of forms) and Arupadhatu (sphere without forms).

The reliefs of the first tier depict the scenes of the earthly life of the incarnate Buddha. The reliefs of the next tier tell us about the life path of the bodhisattva saints seeking enlightenment. The highest spheres of spiritual knowledge represent the statues of the sitting Buddha in niches along the edges of balustrades and Buddha on round terraces hidden behind the lattice walls of stupas. Only the “inner vision” of the believer can fully see them. And, finally, to the crown of the top of the stupa come as the highest stage of comprehension.

Several hundred reliefs are illustrations to the ancient Indian epic tales of the Ramayana and the Mahabharata, as well as various scenes from the everyday life of Indonesia of the XI century: peasants in field work, fishing boats in the stormy sea, scenes of military operations, everyday and genre scenes, dances, trained monkeys. Among the stone decoration of Borobudur, you can see the figures of fantastic animals: Makara – something like a hybrid of an elephant and a fish, and Kala, similar to a lion and possessing a magical power to drive away demons. Their sculptures are adorned with stone drain gutters, and monsters graze figures of small lions.

Initially, all these reliefs were painted with bright colors. But even today, after the lapse of 12 centuries, Borobudur, with all the variety of its pointed peaks, stone sculptures and Buddha statues, remains an outstanding work of ancient art. The reliefs of Borobudur impress with the perfection of sculptural technique, the harmony of composition, the beauty of images. Many details of the reliefs are of historical interest as original documents of that era. For example, images of ships with sails and rockers tell us about the navigation and trade that connected Indonesia with India and China.

For hundreds of years, Borobudur lay covered with volcanic ash and overgrown with jungle. How this unique monument turned out to be forgotten and abandoned is not yet clear. In the middle of the 20th century, it was suggested that after the eruption of the Merapi volcano, misfortunes forced residents to leave their land and seek other habitats. The eruption occurred in 1006, but many scientists believe that the center of the Javanese civilization moved to the Brantas valley back in 928. Anyway, why people left Borobudur, remains a mystery.

In the 18th century, the upper terraces were only partially visible. The Dutch colonial expeditions found other monuments, but did not mention Borobudur. Only in 1814, Lieutenant-Governor Stamford Raffles discovered the monument during the British occupation of the island during the Anglo-Dutch War. When he arrived in Semarang, he received a message stating that a hill was discovered with a large number of carvings. The Dutch Cornelius organized an expedition, he collected a detachment of 200 people and cleared the monument for a month and a half. His work was continued by others between 1817 and 1822. From 1835 the upper part of the monument was cleared and the entire complex became well-surveyed. In 1849-1853 the artist Wilsen conducted a work on sketching the reliefs. His works were taken to the Museum of Antiquity in Leiden. In 1873 the complex was photographed. Then the structure of the complex was completely unclear, and in 1882 the cultural inspector proposed to completely disassemble the monument and place it in the museum.

In the two centuries that have elapsed since the discovery of Borobudur, many fragments of the monument were taken from Indonesia and are now in museums of different countries. In 1907, Dutch archaeologists (led by Theodor van Erp) began the restoration of the temple, but for a long time Borobudur was threatened with total destruction as a result of a landslide. Strengthening of the hill on which the temple stands, and major restoration work was carried out in the 1970-1980s under the auspices of UNESCO. Now the Borobudur complex is one of the World Heritage sites.