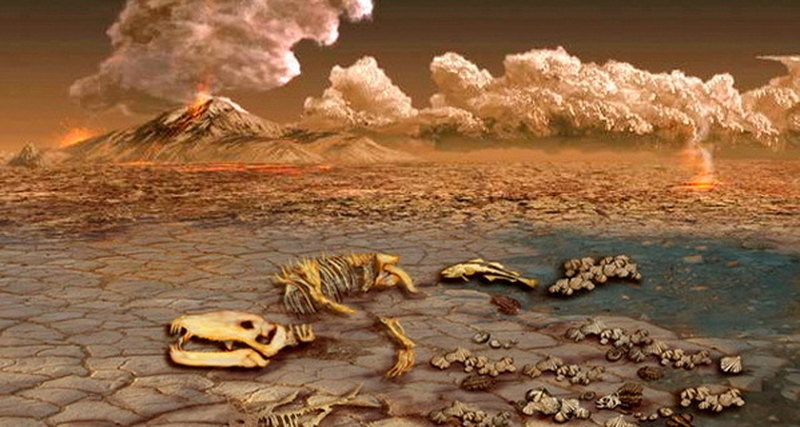 The great extinction of species began with the eruption of volcanoes and continued … infertility of ancient coniferous plants. Holes in the ozone layer missed the ultraviolet, which sterilized pollen and female cones of gymnosperms; the lack of new forests has led to the disruption of food chains and has made a significant contribution to the largest catastrophe of the Earth’s biosphere.

Holes in the ozone layer of the Earth, due to their origin of volcanic gas emissions, existed already 252 million years ago, and could lead to the destruction of all living things on the territory, before the emergence of holes covered with forest, affecting the fertility of gymnosperms. This event, stretching for tens of thousands of years, is known as the massive Permian extinction of species, or the Great Extinction, which resulted in 96% of all marine species and 73% of terrestrial vertebrate species

There are several hypotheses about the causes of Permian extinction. Some scientists believe that the extinction was caused by the fall of a large asteroid (possibly that of a crater near the Wilkes Land in Antarctica). Others insist that the extinction was caused by a sharp rise of methane from the ocean, while others believe that the climate change brought about the catastrophe – the greenhouse effect, global warming, volcanic winter.

Climate change under the influence of the spills of colossal Siberian traps was unquestionably taking place before the onset of mass extinction, but the key factor in the disaster was the previously ignored factor – the effect of ozone holes on plant fertility, according to the authors of the article published in the journal Science Advances.

As is known, the layer of ozone protects all life on Earth from ultraviolet radiation in the part of the spectrum, the shortest wave part of which possesses sufficient energy to destroy DNA. Ozone holes let in the ultraviolet. At the end of the Permian period, the holes in the ozone layer became so large that solar radiation practically sterilized the plants, the authors of the study write. This is evidenced by the abundance of deformed seeds, which paleobotanists find in Permian sediments.

Many petrified seeds and pollen of gymnosperms of the end of the Permian period have an irregular shape (the upper row). In the lower row – pollen of modern dwarf pines, very similar to the Permian flora. Deformation arose as a result of hard ultraviolet training in the laboratory.

To test his hypothesis, Jeffrey Benka, a paleobotanist from the University of California at Berkeley, and his colleagues subjected modern dwarf pines to a hard ultraviolet exposure, from zero to 93 kJ / m2 per day (according to existing models, at the end of the Permian period, the level of ultraviolet radiation rose from 10 up to almost 100 kJ / m2 per day). Strong irradiation led to the fact that 13% of the seeds were not the same. The trees themselves have experienced an elevated level of ultraviolet radiation, but the ovules are affected – parts of female cones, from which seeds of gymnosperms mature after pollination. However, the damage turned out to be reversible; It cost the level of ultraviolet light to fall, as new, healthy female bumps have grown on pine trees.

New and new ultraviolet levels peaked as a result of the formation of new ozone holes could permanently halt the reproduction of gymnosperms and disrupt all the food chains of the Permian period, the authors conclude; this could in itself lead to the extinction of many species, and in combination with global climate change – to mass extinction.