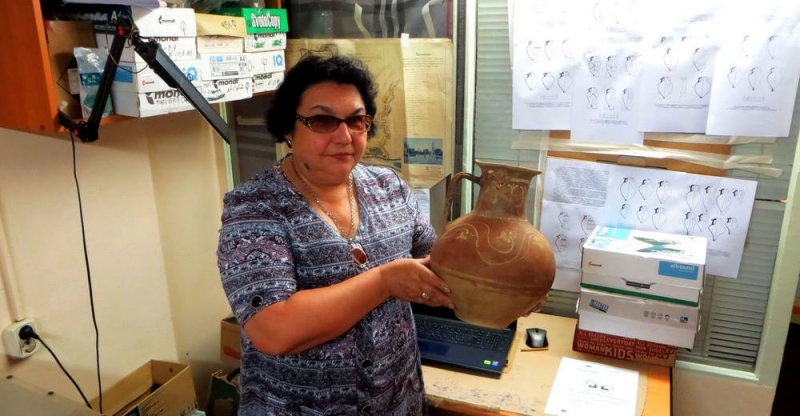 Rescue excavations on the site of the future road to the new airport gave amazing finds. In the course of archaeological excavations on the site of the construction of a road to the future airport discovered finds which add much to our knowledge about life in the great Steppe. Work conducted by the organization OOO “Yuzharkheologiya”. About the found artifacts told the archaeologist the Faith of Larenok.

– Under current law, such work must be carried out prior to construction. The site — Aksayskiy district. What have archaeologists found in the same place?

In one place we came across interesting: it is the confluence of two rivers Tuzlov and Nesvetay. The arrow between them was the mound that we dug.

– This mound is called?

– Archaeologists call it Komyshuvakha-4. People in ancient times saw this sandy hill encountered during wind erosion of the soil and used it as a place for their graves. And then there were new mounds over the graves. The oldest burial is the third Millennium BC and they belong to the so-called catacomb culture. It is so called by way of burial of the dead. These graves are about a dozen. The next layer of burials is the late bronze age — the turn of the bronze age and iron since the thirteenth century BC. This tribes carcass culture — again, it is named according to the method of burial. These graves were more than just a few dozen.

– Yes, in a mound Komyshuvakha-4. Since this place was used as arable land, plowed and her big ploughs in great depth, some of these burials has been damaged. And from them remained a little — for example, small pots.

– The remains of the funeral food, probably cereal. In the Kurgan in a small amount. But there are burial complexes, which can be attributed to the early iron age. This is the burial of Sarmatian time, starting with the sh century BC and including the several centuries of our era. Among these graves was one of the most interesting – with an amazing find.

– That allows you to call this large jug with an unusual pattern amazing, even unique find?

– This vessel is interesting because it, as it is now said, branded, imported. It’s not just Greek ceramics. We are dealing with a product off the shores of North Africa, from Alexandria. There were used for water vessels, called hydria, with the same pattern. In a cemetery in Alexandria, which was called Gadra, such vessels were used as funerary urns.

– And this vessel was no residue of dust?

– No, it was a simple burial with a traditional skeleton – the remains of the skeleton. In the burial also discovered a lot of interesting things.

– The burial of a male or female?

– A male warrior. Because next to him I put the sword, the bridle set. This indicates that during the life of the buried man was a horseman. And the most interesting — there was a bronze cauldron.

– There was cooking a funeral repast?

– Most likely. It is believed that this tradition, as in the Sarmatian time in the tombs have consistently found bronze cauldrons. And somehow, these boilers are broken to pieces, to pieces.

– What it needs to be an effort to pot with such thick walls to break?!

– And, nevertheless, they were broken. According to archaeologists, the boiler is so “omerville”. In the afterlife he was not supposed to serve for cooking. And for what purpose its remains left in the grave, we do not guess.

– We can assume that the man was obviously not the poorest among their compatriots?

– The boiler, the weapons, the jug suggests that it was not a simple warrior. In the Northern black sea coast such finds as a pitcher from Alexandria, very little: rarely brought them.

– What are your findings?

– Most likely, in the Rostov regional Museum of local history. I can say that similar vessel found in Tanais.

– Also in the burial?

– Yes, but it was a different shape — not jug, but with the same painting. And the next layer of burials is burial of Golden Horde time. Most likely, this was the period when the Golden Horde adopted Islam, because there are no finds no. Poses buried we can assume that the burials belong to the FOURTEENTH century.

– Well, mound of, well, an arrow between two rivers, these places are not so little. What do you think, why this place attracted so many people at all times?

– It is, in fact, sand dune, which people turned into a centuries-old cemetery. Played the role and Eminence, and this mound, and other man-made, played the role of a sort of markers on the ground. If was some kind of figure on the mound, it is, of course, were not preserved as remains of the sanctuary, if it was here.

– How many you found of the burials in this mound?

– 57 burials. Next excavated many burial mounds and at the site of the airport. And on-site construction of the water main. That is, due to the construction of a new hub, was able to explore large areas. Found burial of all times and peoples — including such unusual, as this complex, which many add to our knowledge about the life of the ancient steppe.

File. Larenok of Vera Alekseevna, an archaeologist. Was born in Rostov-on-don, in 1981 graduated from the history faculty of Rostov state University (now SFU), the Department of ancient history and the middle ages. Member of archaeological expeditions in the Rostov region and Krasnodar Krai. Today, LLC “Yuzharkheologiya”. The author of the book “Meotian of antiquity”.