The cities which have left under water 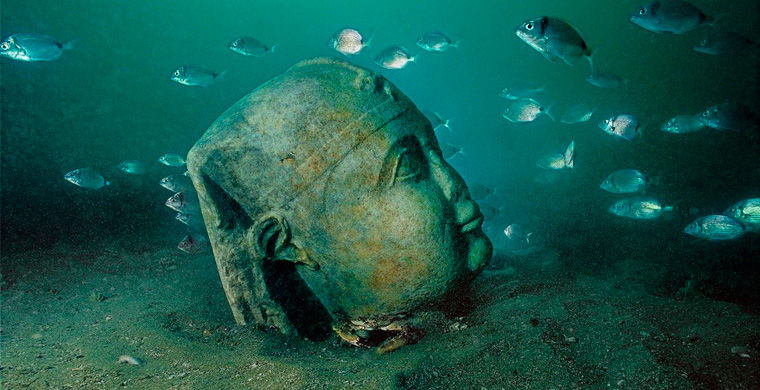 These Atlantis are waiting in the millennia in the wings that they were investigated and told about them to the world. For now it is unique places for diving.

The mankind for centuries dreams to find mythical Atlantis, and sea depths are full ruins of absolutely real cities. Some of them once destroyed thousands of people under the fragments, others were left and forgotten. Under a thick layer of silt architectural monuments of ancient civilizations and empires doze. Many are investigated and are protected by UNESCO, the majority in the millennia are waiting in the wings. 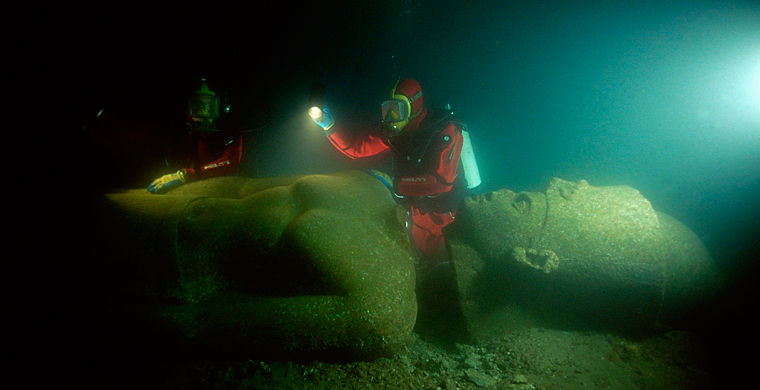 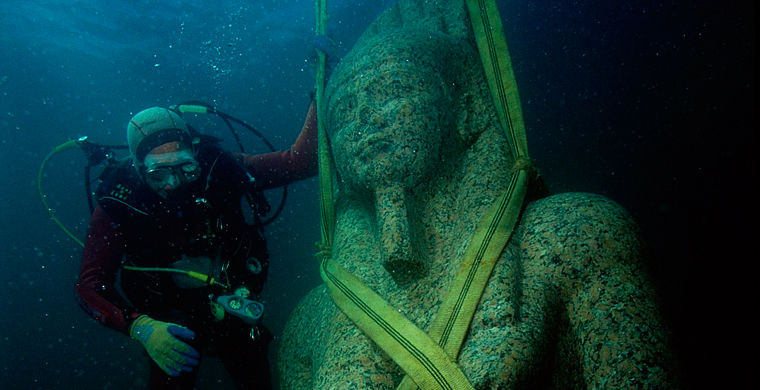 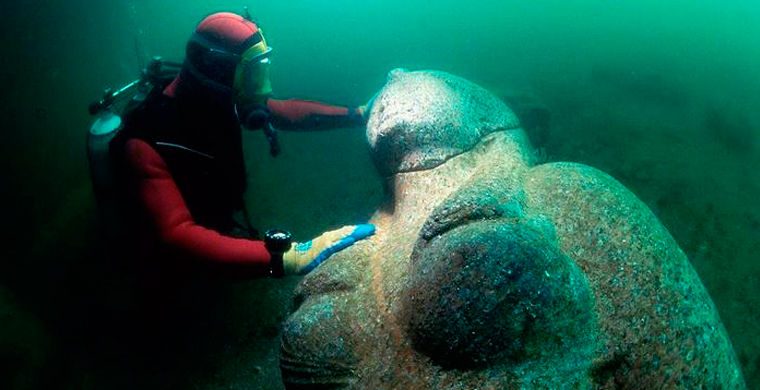 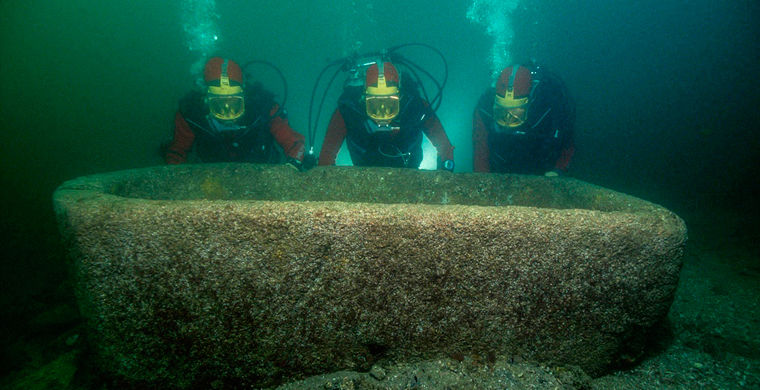 Geraklion, or Tonis, is known for numerous historical finds. In this underwater city which is based upon the 50-meter depth of the gulf of Abu-Cyrus where Nile flows into the Mediterranean Sea, under a layer of sand household items, jewelry, ruins of palaces and temples, ancient statues have been found… Besides, in 6 km from the coast fragments of 64 Egyptian ships are based to this day. According to the famous underwater archeologist Frank Goddio, on studying of all underwater artifacts it can be necessary up to 200 years! The most part of finds has remained in good shape, despite stay under water during 2000.

The underwater city was called in honor of one of artifacts — a plate on which it has been written that it has to be erected in “Herakleion-Thonis”. The city is obliged by the double name to rich Greek-Egyptian history. Geraklion — the name Greek: on Herodotus’s mention, the heroine of myths Elena Prekrasnaya with the loved Paris has run away into Geraklion for fair anger of the husband — the Spartan tsar Menelaus. The Roman part of history is remarkable the fact that famous Cleopatra has been crowned in the city of Tonis — so it was called by Egyptians.

One of the most popular versions of disappearance of the city under water — the earthquake which has led to a tsunami. 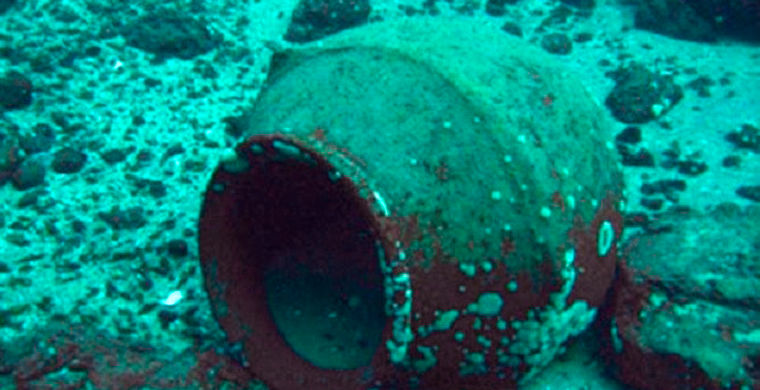 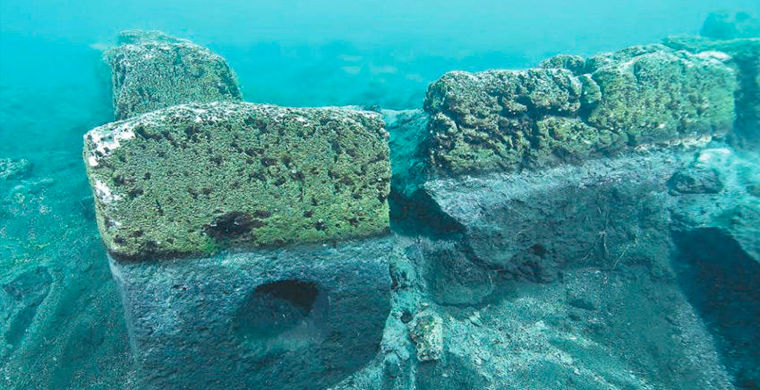 The city of Samabakh is based upon depth of the most beautiful lake Atitlan surrounded with three volcanoes. The lake is considered sacred — on a legend, it left the first Maya. At a depth of 30 m traces of several buildings of different size and the ancient temple with the remained front staircase were found. The flooded structures carry to the period when the state of the Maya didn’t reach the highest blossoming yet — 250 AD Besides, products from ceramics, including altars and censers, and also several steles decorated with a carving were found. It confirms a guess of scientists that the city was the religious center of the Maya.

The found ceramics demonstrates that inhabitants left houses in a hurry, having abandoned all the property. Scientists assume that the city left on a bottom as a result of activities of volcanoes about 2000 years ago.

Samabakh was found by the archeologist and the diver Roberto Samayoa during one of amateur immersions. The first part of the name comes from a surname of the pioneer, and the second — “abakh” — in translation from language of the Maya means “stone”. Samabakh is included in a tourist route on the main towns of the Maya in Guatemala. 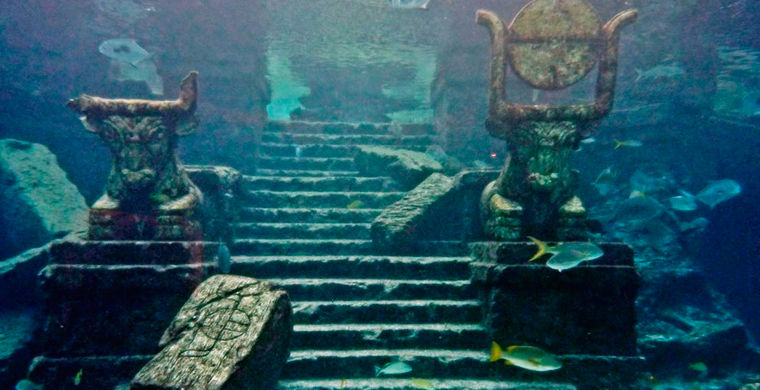 Dvaraka — one more city from legends. The mention of this city as about the capital of god Krishna is in the puranakh and “Mahabharata” — the Old Indian epos. The legend says that Dvaraka has been erected for one night on Krishna’s command. According to the legend, the capital has existed about 10 000 years, and in seven days after Krishna’s death the city was absorbed by the sea.

In ancient legends of Dvarak it is described as very rich and unusually beautiful capital: “… the city has been built in the middle of the sea: in him there were direct roads, wide streets and lanes, and also wonderful gardens and parks where trees of desires grew …. In the city there was a set of palaces and gate … Almost all palaces were unusually high”.

Have found him almost incidentally. In the late nineties the Indian archeologists investigated a tidal zone near Banapur and have found the remains of a stone wall which were almost not visible in the sea. When scientists have continued searches with the underwater equipment, at a depth from 7 to 40 m ruins of the ancient city have been found: walls, buildings and temples, paved plates of the road, sculpture, coin. For India of that time underwater excavation it were a new experience, but researches continued, there were no problems with financing yet. 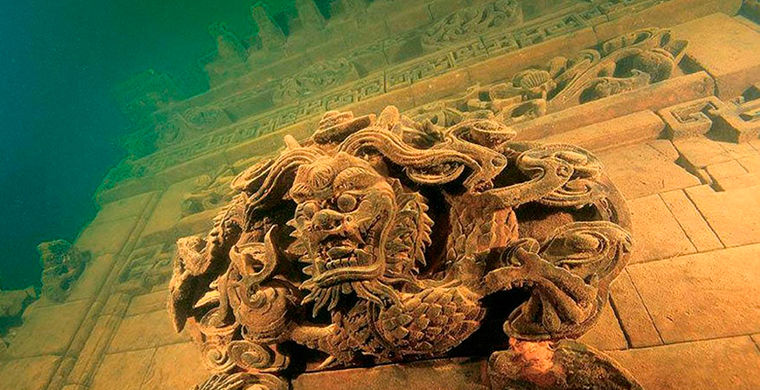 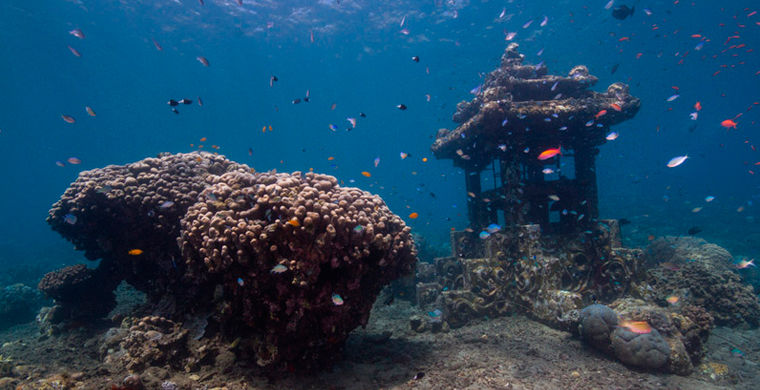 Uniqueness of the diving city of Shi-Chen (in translation — “The city of a lion”) that he is obliged by the emergence not to the nature, and the person. About 50 years ago the Chinese authorities constructed hydroelectric power station for the sake of which 377 villages and 27 cities were flooded, and 300 000 people are moved to other cities.

Surprisingly, but still ancient city of Shi-Chen stood on a surface, nobody was interested in it. And to education of the artificial lake Qingdao City of a Lion it is obliged by glory of one of the most beautiful diving cities. Besides, waters of the purest fresh lake became the favorable environment for preservation of historical material. Scientists consider that they under water of a relic will remain better therefore they aren’t brought to the surface.

Constructions of the city of Shi-Chen carry to 621 year AD, but in the same lake even more ancient city He-Chen founded in 208 AD was found. Now it is known that the lake hides about three more cities, but a research of diving depths — very expensive and long process. But on the place of detection Shi-Chen and He-Chen the Ministry of tourism of China constructed the diving center and everyone can see the most ancient ruins own eyes.

Other cities destroyed by people — in our video selection. 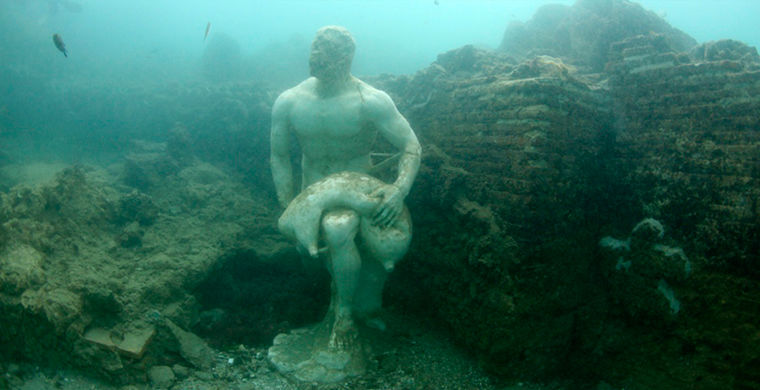 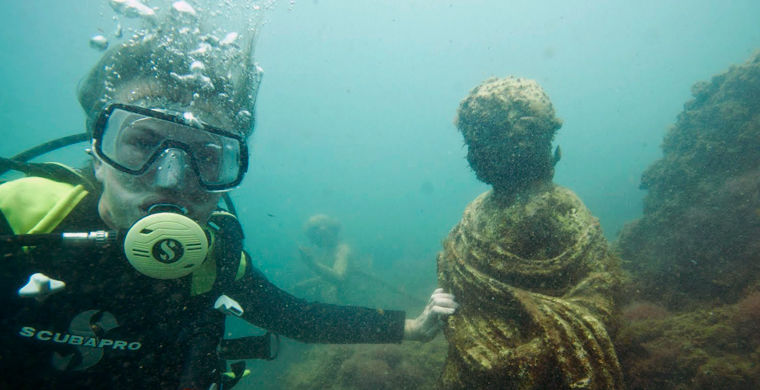 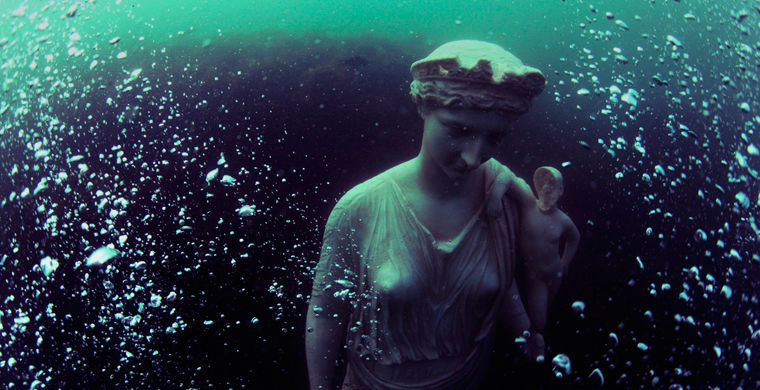 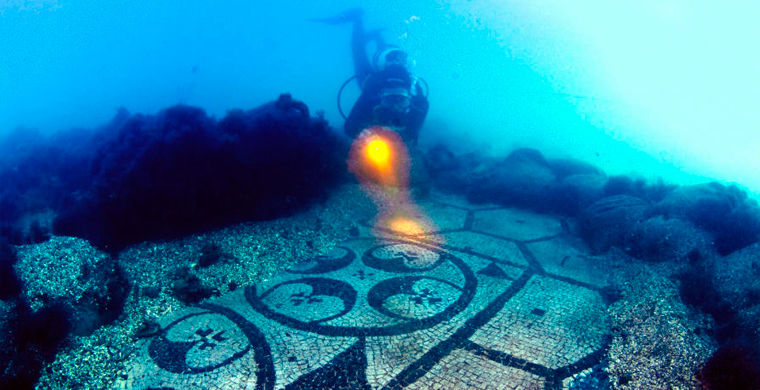 Also one of favourite places of divers. On the place of the found city the underwater archaeological Bailly park is built. A part of the park, including Bailly’s lock and the semi-flooded Serapis’s temple, находттся on the land, another — at a depth from 3 m to 24 m. Divers can “take a walk” in underwater streets, visit Neron’s country house and even to swim away in the Roman baths constructed about 1500 years ago.

The city was famous for hot springs that promoted its prosperity as antique “Spa resort”. Terms were at that time appreciated not only medicinal properties, but also as an opportunity it is interesting to spend time, political clubs sat at them even. And residents of this city were a good judge of entertainments — the resort lived fast in feasts and pleasures. Seneca even called the city “hotel of all defects”. It is established that once rich and beautiful, Bailly was plundered by saratsina and after that, thrown and desert, gradually left under water as a result of volcanic activities. 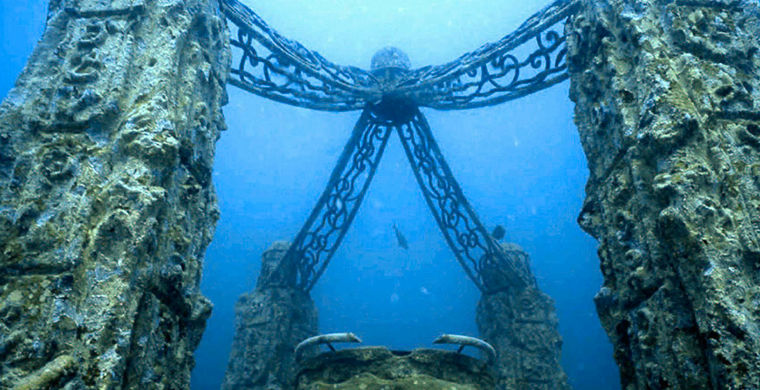 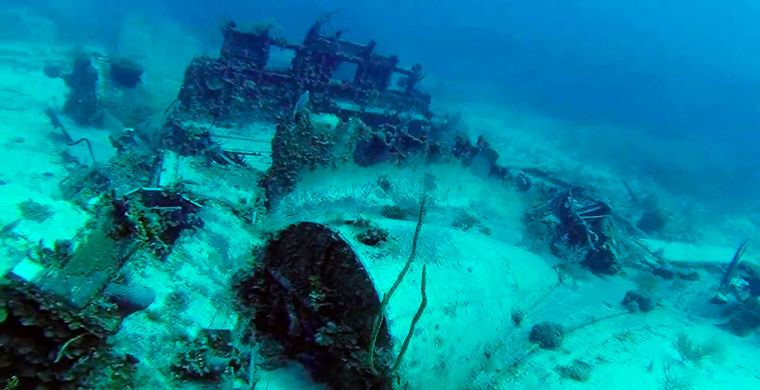 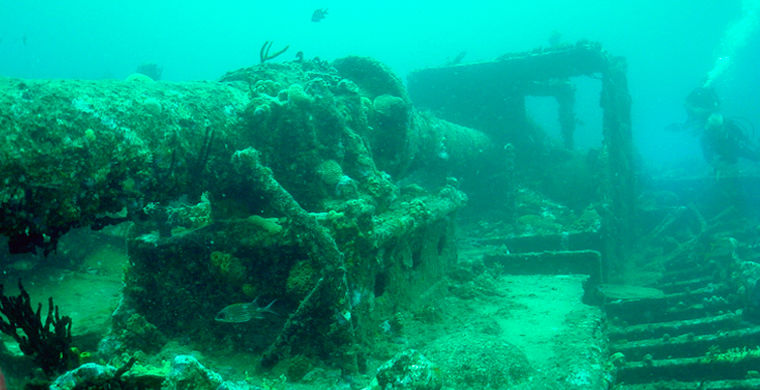 The sunk city didn’t open Port-Royal for scientists of antique palaces and statues of ancient deities — it is interesting to others. Based by Spaniards in the 16th century, the Port-Royal was the center of trade on the Caribbean Sea, and having passed from Spaniards to British, became “piracy Babylon”. The gangs which chose the city turned it into a brothel with taverns and brothels. Slave trade prospered here. Therefore contemporaries counted the earthquake which happened in 1692 which almost completely flooded the many thousands city as a God’s penalty for libertinism. We already wrote about the tsunami which ruined many cities on the planet.

In 1959 and 1966 the American archeologists organized expeditions on the sunk port, but values which remained after attacks were of exclusively historical interest. Scientists found leftovers and drink on which it was possible to establish that they ate and drank at that time. It is possible to judge life also on found tobacco leaves, to tubes for smoking, to the device for rum distillation, to historical documents, cards and silver jewelry.

At the moment in a stage of development there are several projects on upgrade of the underwater city in a tourist sight. 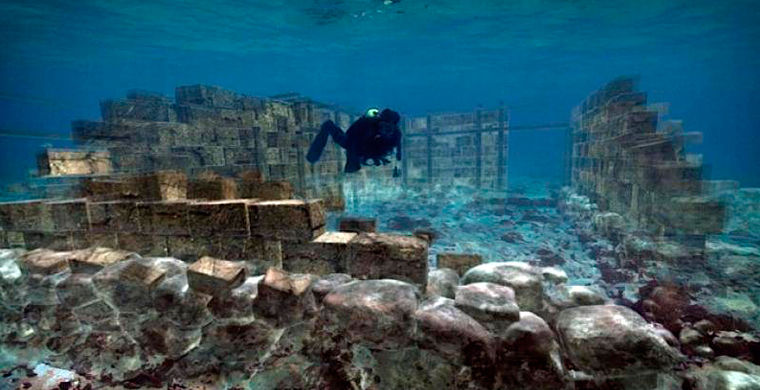 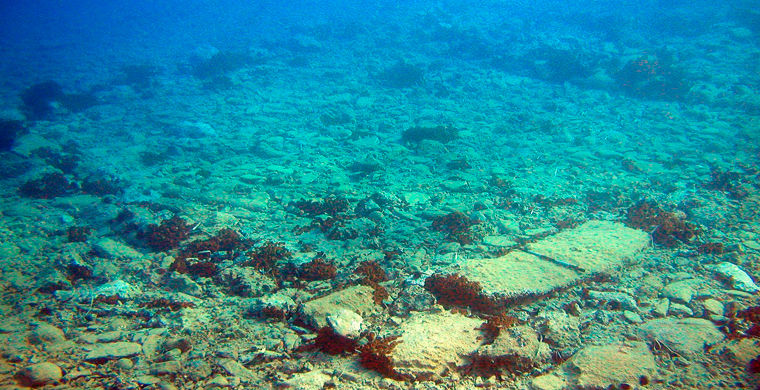 Pavlopetri is unique already the fact that it is the first underwater city found by archeologists. He very ancient — the found artifacts demonstrate that the pioneer settlement on this place belongs to the Aegean civilization dated for 3000-1000 BC. On the area of 30 000 sq.m scientists have found the remains of residential and religious buildings, and also the cemetery. It is considered that the city has suffered from numerous earthquakes therefore has been flooded.

Underwater ruins are at a depth of 3-4 m in the south of continental Greece, in Laconia, near the city of Pavlopetri which has given the name to the underwater city. As the city was called in the ancient time, and also the dominating form of government are still not defined. Scientists assume that it was the large port center. According to doctor John Henderson, the head of underwater researches, it “one of the few places in the world where it is possible to float in literal sense along the sunk streets of the ancient city and with curiosity to glance in one of graves”.