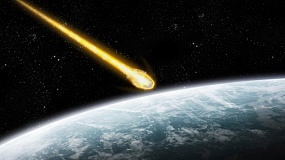 Geologists from Polytechnical institute of Rensselaer (USA) have made the report at an annual conference of the American geological society, having produced the evidence that 56 million years ago the huge asteroid or a comet which has caused the sharpest jump of temperature for all history of our planet fell to the Ground.

About 56 million years ago on Earth there was a so-called Palaeocene-eotsenovy temperature maximum (PETM) — average has jumped up temperatures of our planet for only a few thousands of years by 5−8 degrees due to hit of a huge amount of carbon in the atmosphere. Warming has lasted not less than 100 000 years and has led to extinction of many animal species and plants, Science writes.

Authors of the report have offered a new explanation of PETM — according to them, sharp warming could be provoked by falling of a large asteroid or comet. Discovery has been made in the course of work with models of sea deposits, on time corresponding to the beginning of PETM. Geologists have encountered in deposits spherical granules of the melted glass, such granules are formed at blow of celestial bodies about Earth. In three cores (breed columns) after a layer from a sferulama scientists have noticed also a layer with particles of charcoal which presence speaks about the intensive wildfires which have begun because of sharp temperature increase.