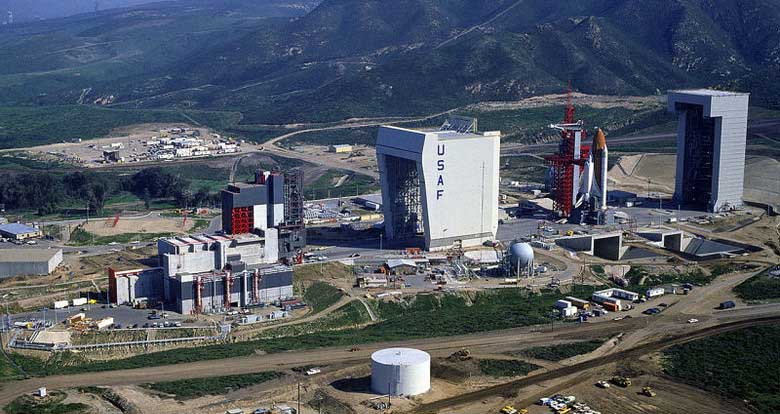 Space launch complex 6 (SLC-6) ( the Official name Vandenberg”s Space Launch Complex Six) air force base Vandenberg, California, the locals call “slick six” (Slick Six). This expression can be translated in different ways: as fast and as slippery as brilliant. But perhaps the most faithful translation would be something like “slippery six”.

After forty years of the history of this launch pad, none of the launches were not successful. Whenever failures occurred for different reasons, but the locals are confident: over the complex is a curse of the Indians.

“Slick six” appeared on the map of military facilities in 1966. It was then decided to prepare a launch pad for a powerful new media force “Titan GP”. With the help of the space was to start with secret military missions manned orbital laboratory MOL (Manned Orbiting Laboratory) — modified double ship “Gemini” with Annex residential unit the size of a trailer. The first launch of air force leadership planned for the end of 1968, so construction work was carried out at an accelerated pace.

For the construction of needed a lot of land. Therefore, the government has allocated funds for the purchase closest to the construction sites. The owners didn’t mind — after all, few want to live next to the spaceport. March 12, 1966, all the formalities were settled, the bulldozers arrived and began to clear the site for future construction. During excavation, the builders uncovered an ancient burial ground of Indians, comasa.

On the surface of the earth seemed bleached bones time. As soon as this became known, modern Indians-Kumasi bombarded the government authorities demanding to stop the construction. They were talking about how not to desecrate the Holy places and to disturb the peace of the departed.

But for the government, invested in the purchase of land a lot of money, the arguments of the Indians sounded unconvincing. Therefore, citing military necessity, air force leadership has continued with the construction of the complex. Then the elder of the tribe of comasa put a curse on the “slick six” and all related projects.

Initially, the military made fun of the beliefs of the Indians they considered something of a throwback, having nothing to do with real life. But as it turned out, in vain — the spell began to work. Despite the fact that the construction was completed by mid-1969, the creation of the module for which it was built “slick six”, was late. Initially, the first launch was postponed until 1972, then President Nixon and all canceled the MOL program.

In the known laboratory already did not need it: automatic reconnaissance satellites is much cheaper and seemed more reliable to the President. The complex, which was spent one billion dollars, preserved.

On the ill-fated project only remembered in 1984. New the crew hastily preparing the site for launch of the spacecraft reusable. The spaceport seemed just perfect: on three sides it was surrounded by mountains, and on the fourth the sea, so that the outside observer could only for a few moments to see it, passing by rail. In addition, irrational in a literal sense to throw away huge amounts of money spent on “slick six”.

However, it soon became clear that costs must increase to collect the Shuttle directly in the open air was impossible, and the existing buildings it was not good. In the end, at a cost of 79.5 million dollars (instead of the planned forty million), managed to create a moveable tower with a height of 76 meters. However, trouble was just beginning… it Turned out that because of the frequent fogs it is possible glaciation of the external fuel tank of the vehicle.

This could lead to disaster, so experts designed a special unit with two turbojet engines, giving a flow of warm air through the diffuser above the tank. But, having spent $ 13 million, its inventors made a surprise announcement: they are not sure that the installation will work. And if it is, then the problem will not solve…

The deadline for the first Shuttle launch kept getting pushed back. On the future of the spaceport is often a serious problem. Reports on the construction contain stories about the sabotage, about the use by workers of drugs and alcohol, is absolutely unacceptable for Americans 16-hour working day welders.

All this has led to the fact that “slick six” drew the attention of the FBI. The investigation revealed shocking facts: on the launch pad has discovered more than 8000 of defective weld areas, many of the pipelines were cut or split, and important valves were clogged with debris.

A correctly designed flue they could accumulate liquid hydrogen flowing from the main engines of the ship in case of emergency cancellation of a launch that would have led to the explosion. In addition, the fastening of the Shuttle to the starting trunk was too hard, so the ship at the start could be severely damaged wing orbital stage.

And after discussion of the results of the investigation, the experts began to call the spaceport “disposable”. They predicted that after the first launch of the space Shuttle launch complex simply destroyed. In a radio program “slick six” was called “an accident waiting to happen” and predicted that the Shuttle it will explode with a probability of 20%.

But despite the obvious deficiencies, the air force insisted on the surrender of the launch centre. This was required by the political moment. 15 October 1985, President Reagan announced the next giant step in the program “space Shuttle” — the completion of the launch-landing complex at Vandenberg air force base.

The first launch was scheduled for mid-1986. The ship was supposed to pilot Robert Crippen, the crew planned to enter the Deputy Minister of the air force. But after the disaster “Challenger”, which occurred January 28, 1986, “slick six” was again mothballed. From the start at a cost about eight billion dollars and was not running any booster, not a single satellite!

The third time the complex has gone through another modification in the early 90-ies of the last century. In 1994, suffering a complex rented by the company “Lockheed.” At this time, “slick six” planned to use to launch a new media family “Athena”. 15 Aug 1995 the launch of a communications satellite. He carried a small rocket LLV-1.

It seemed that the curse of the Indians was over: the start was successful. But after three minutes of flight the missile suddenly several times changed its course, and then… flew back toward the California coast! Officers of the security polygon of nothing, only to destroy it over the Pacific ocean.

After a long investigation of causes of accident in the design of the rocket has made modifications and was scheduled for a new start. This time the customer was NASA. The national space Agency planned to launch a scientific satellite “Lewis”. At first it seemed that the project was a success. At least rocket, launched on 22 August 1997, reached orbit.

But after just four days, “Lewis” lost control, began to turn somersaults, has exhausted the life of batteries and at any moment could fall down into the atmosphere. That’s what happened after a month of unsuccessful attempts to regain control of the machine. September 28, 1997 “Lewis” descended from orbit and burned up in the atmosphere over the southern Atlantic ocean.

After the accident, the complex was left alone for nearly two years. But the company “Lockheed Martin” decided to make another attempt to overcome the curse of the Indians. April 27, 1999 was another sad date in the history of space exploration. On Board the rocket “Athena 2” with “slick six” was launched a commercial satellite. He had to shoot and send to Earth images in high resolution. As in previous times, the launch was successful.

But soon ceased to flow telemetry from the medium, and the ground station in Alaska did not found a satellite. “Debriefing” ended a disappointing conclusion: probably, the fairing did not separate from the upper stage, whereby the latter have not developed the appropriate speed and the satellite could not reach orbit…

Despite the chain of failures that literally stalking the launch pad, still be willing to use it. Since 2000, the resort was transferred to the company “Boeing”. It was converted for launching the rockets “Delta-4”.

In 2006 he had a successful launch of the Delta IV Medium. Then there were several runs, is also considered successful. The Indians curse finally lifted? It is known that the curse can remove those who have it imposed. So, maybe the management of “Boeing” addressed to the Indians chumashim and tried to find some sort of compromise?