The giant skull of the primitive cow was found in Buryatia 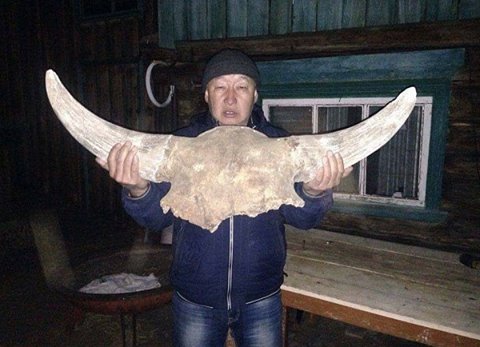 The giant skull of the primitive cow was kept by the farmer from Buryatia for seven years. The Siberian found a find in the ravine and decided to leave it to memory. Dragged to the house, I found a place for her in the barn. There, perhaps, the remains of an animal would have been stored for as long as that time. If Alexander Tsyretarov, deputy head of the Nizhnevylovginsky settlement, did not visit the villager on a visit.

– I’m fond of breeding dogs, – says Alexander. – I went to the Bichur district to look at the Mongolian bangars. I heard from local residents that one of them has a large skull of ancestor of our cows. I went without special enthusiasm to see what kind of skull this was and, I must admit, was impressed.

The size of the skull is one and a half times larger than that of ordinary cows, with two large horns. There is no doubt that such animals in the territory of Buryatia are now clearly not found. Why did the farmer not tell about the discovery of archaeologists, because, it is likely, it is of historical value? The fact is that he never gave special importance to it.

But when Alexander Tcheretarov brought photos of the skull from the Bichur district and published them on his social networking page, his subscribers became interested in the remains of the animal.

“A woolly bison of a megafauna weighing about one and a half tons,” suggested Anatoly Shobolov.

Really very similar in shape to the skull, that it belonged to this particular animal, which formerly inhabited the whole of Eurasia. But whether it is so or not, now will understand, perhaps, the staff of the Ethnographic Museum. Now there are talks about transferring the remains of the ancient “cow” to them. The farmer who found the bones has already given it a go.

By the way, the remains of ancient animals are not found for the first time in Siberia. So, for example, in 2015 in the Irkutsk region a local resident discovered bones of a woolly rhinoceros.