“The Golden man” or “man of Issyk” 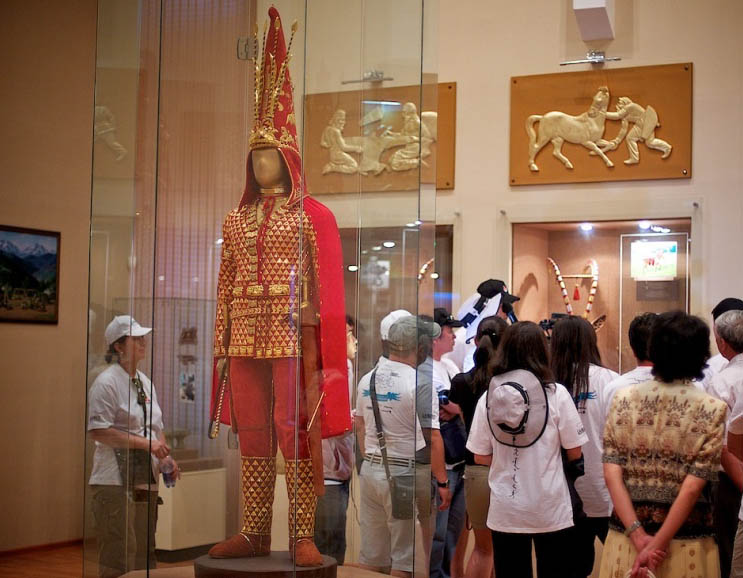 In 1969, the Kazakh archeologists made a unique discovery: in one of the ancient mounds found the “Golden man” immediately became famous all over the world…

Kazakh archaeologists discovered the object, of course, not made from a piece of solid gold – a large part of the military armor, the boots and the hat is decorated with a set of Golden plates, which gives the found object similarity with the statue of precious metal.

“The Golden man” or “man of Issyk” (Kazakh name – “Altyn Adam”), was found 50 kilometers from Alma-ATA to the excavations of the mound 6 metres high and 60 metres in diameter, which is located on the shore of the Issyk river on the outskirts of Issyk.

In the grave, lined with spruce logs, on a wooden floor was located the remains of a soldier in dress, entirely covered with gold plates. His head covers a high pointed hat, decorated with images of winged horses symbolising the sun God. The warrior was armed with a long sword and a short dagger. In addition, together with the soldier in the tomb were pottery vessels from Mare’s milk, wooden trays with meat and precious vessels of silver and bronze.

By assumption archaeologists, this young man (it is believed that he is about 18-25 years) belonged to the SACO tyrakowski rulers, and was the representative of the ruling dynasty of the Kushan Empire. 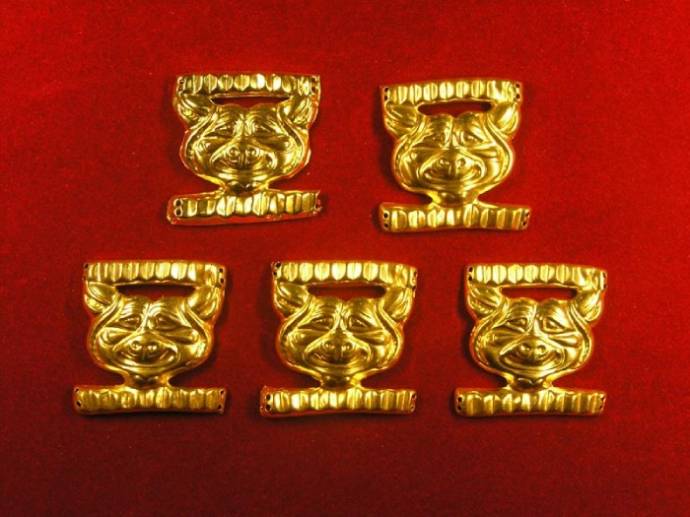 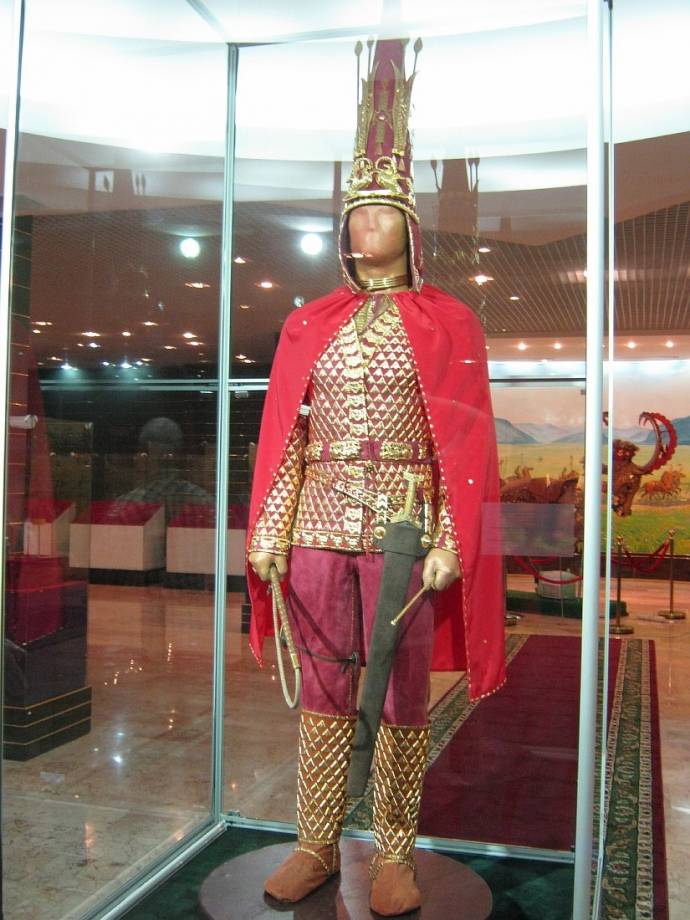 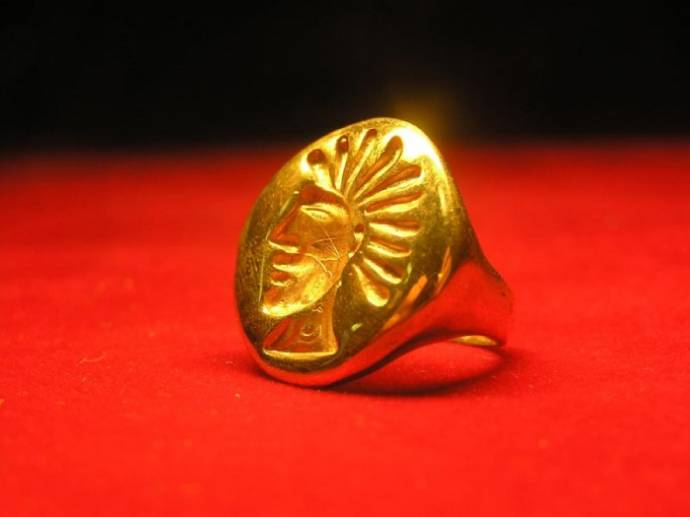 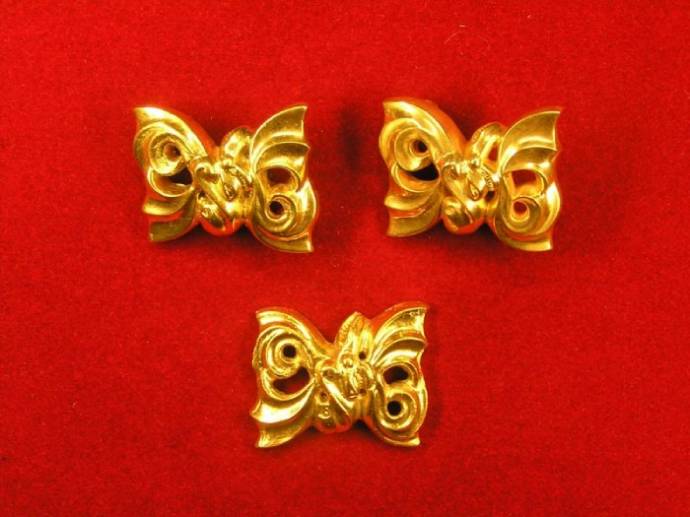 Saki is the collective name of a group of Iranian-speaking nomadic and semi-nomadic tribes who lived in the first Millennium BC. Researchers believe that they, along with the Massagetae, belonged to the Eastern branch of the Scythian peoples. Unfortunately, their material culture has survived in meager volume, so the remains of the “Golden man” of great interest. Ancient historians have argued that Saki was a skilled and fearless warriors.

So, Herodotus said: “…a hindrance Kira was Babylon, Bactrian people, the Sakas and the Egyptians.” In this passage the Sakas are mentioned along with the mighty powers of the Ancient world, such as Babylon and Egypt, and there is nothing strange. The explanation for this can be obtained from the Herodotus, he wrote that the cavalry Saka was a serious military force, much to strengthen the army, at whose side he fought.

It is not surprising that the clothing of the young leader is so rich and even elegant, because the Saki thus reinforcing its important place among other ancient peoples.

In the grave of the “Golden man” was found more than four thousand of jewelry made of gold leaf, once sewn on clothing, footwear and headgear, gold rings, figurines, bronze and gold weapon, various vessels, as well as a silver bowl with 26 written characters, not deciphered so far.

All gold plaques with images of animals combined with plant motifs. Height of headdress decorated with 200 gold items equal to 65-70 see they depict the figures of a leopard, argali, mountain goats, horses, and birds. On the neck of the leader there was a Golden necklace, a jacket of red leather was also strewn with small Golden ornaments.

Today, some researchers make the assumption that this is not a young man, and the legendary Tomiris -Queen of the Massagetae who killed the Persian king Cyrus, the founder of the Achaemenid dynasty. About the middle of VI century BC, Cyrus decided to break the Massagetae. About the battle between their armies, Herodotus wrote.

The nomads defeated the Persian army fell on the field of battle, died, and the king Cyrus. Tomiris ordered to stick your head in Kira’s fur with blood. “You are cunning seized my son,” she said… now Partake of the same blood, that you’ve always longed for, and which couldn’t get enough!”. However, too few surviving remains to determine the sex of the “Golden man”. 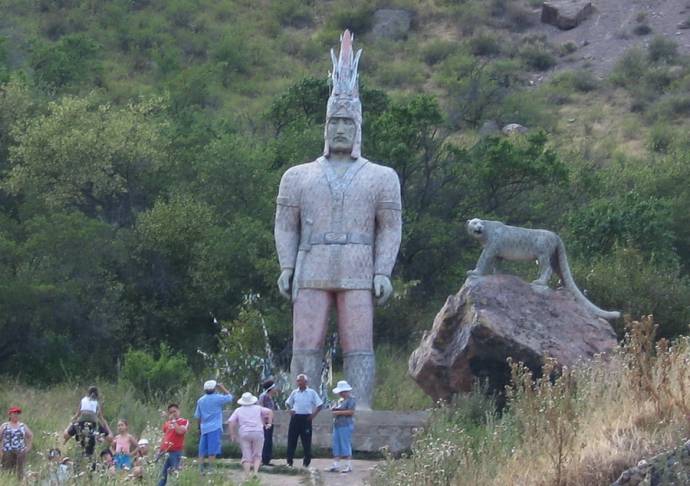 Currently, the ancient warrior of unknown sex exhibited in lighted glass showcase Museum of the new capital of Kazakhstan – Astana. On the pedestal is a black mannequin in a Golden shining armor: a person of noble SAC is covered with dark velvet, and it seems that eternity itself looks at the people from the bottomless depths of history.