The imperishable head of Niccolo Paganini 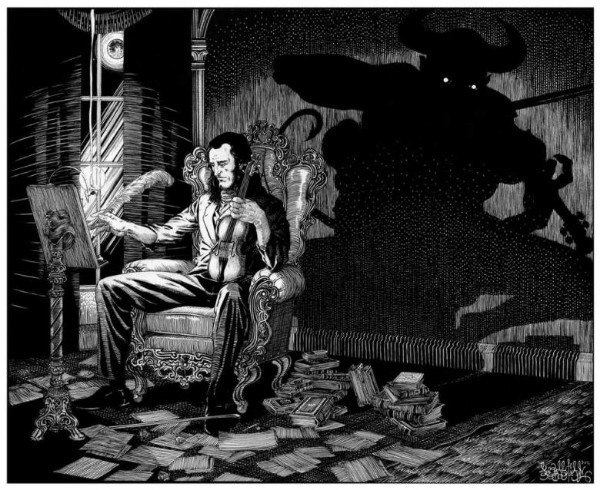 Niccolo Paganini, born on October 27, 1782, was not a geeky parent and society a child prodigy, and his musical talent was revealed at a relatively late age.

He was already forty-six years old when he first left Italy to go to conquer world glory.

And indeed, he brought Europe to the real ecstasy. His outstanding talent and mysterious person hypnotized the audience and asked the experts riddles, which are still unexplained today.

Apparently, part of the answer to the puzzle of Paganini is contained in the unusual anatomy of his body, the design of which was ideally suited for playing the violin. All the doctors who examined the violinist confirmed his unique anatomical predisposition to playing this instrument.

He had abnormal shoulders that did not correspond to his frail body. The left side of the chest was wider than the right and hollowed in the upper part; the left shoulder is much higher than the right, so that when he dropped his hands, one of them seemed shorter than the other; arachnids and fingers became so flexible that they allowed him to make the most unthinkable movements and combinations.

The left ear of the violinist was heard much sharper than the right, and the eardrum was so sensitive that he was in great pain if there were loud conversations nearby. At the same time, he was able to catch the quietest sounds at a great distance. But in addition to anatomical predisposition, Paganini possessed, undoubtedly, an innate musical genius.

In addition, much indicates that Paganini owned a completely new technique of the game, which he never disclosed to anyone. It has happened on many occasions that curious violinists from the orchestra tried to play the violin of Paganini. And with a great surprise, they found out that she was completely upset, and it was impossible to play on it.

It is assumed that the violinist invented his own tuning of the strings, which enabled him to easily play the most difficult chord progressions that can not be performed with the usual string tension. On this occasion, many argued that the maestro could in one fell swoop rebuild the strings of his instrument during the game.

The power of his game over the public was truly demonic. After all, it was not without reason that, at his first concert in Vienna, a music critic who was present there insisted quite seriously that during the witch’s variations he saw a living devil standing next to a violinist on the podium.

Even Henry Heine after visiting one of the concerts of Paganini wrote: “Maybe at the end of the game he is no longer a living person, but a vampire rising from the grave, sucking blood from our hearts with his own game?”

Franz Liszt was so shocked by the devilish genius of Genoa that after one of Paganini’s concerts he was seized by a nervous fever, and he was convinced that the magician with the violin was the demon himself. He even believed that Paganini killed his mistress and for many years languished in a dark dungeon, where he made himself a violin with a single string and thus mastered the magic art of playing the string “salt.” Moreover, Liszt even claimed that Paganini made this string out of the gut of a strangled girl.

However, not one leaf believed in this. From time to time, there was a rumor that Paganini spent many years in prison for having deprived his beloved of life: whether he had killed, or poisoned, or stabbed. Many, sold throughout Europe, lithographs represented a brilliant violinist in a dungeon at the time of the murder.

Of course, Paganini suffered greatly from these rumors and tried everything to dispel them. For example, in Vienna he even persuaded an Italian ambassador to openly declare that he has known Paganini for more than twenty years as a noble person. And in Paris he addressed in an open letter to Professor Fetis, the publisher of the Review Musical, where he made an attempt to reduce the rumor of the prison to a ridiculous misunderstanding.

But people did not believe him. And even they found, seemingly, weighty arguments for this. So, about an interval of six years, that is, the period when he escaped from his parents’ home and was accepted for permanent service at the court in Lucca, almost nothing is known. Although the remaining years of life violinist painted almost by the day. Where did Paganini spend those six years? – It is not known. And again: when he appeared again in the light, his game really reached perfection, inaccessible to mere mortals.

On March 3, 1831, Paganini’s letter in the “Review of the Musicals” was answered in the same journal by the musicologist and librarian G.E. Andre. “You want the bad rumors about you to fade away,” he wrote, “and every decent person was disgusted with these conversations, as if to pathetic slander, try the easiest and most effective means: illuminate the darkness of these years and tear the ground out of gossip!” Paganini did not answer this challenge. And, of course, his silence was perceived as an admission of guilt.

And the people’s rumor never ceased to say that Paganini sold his soul to the devil. His contemporaries could not explain anything to the virtuoso possession of the maestro violin. And many added: “And after death, he does not find comfort!” These were absolutely right: the coffin with the body of the great musician was buried more than ten times and again tore. The posthumous wanderings continued … fifty-seven years – almost as much as Niccolò Paganini lived on the ground …

The famous violinist died from consumption in Nice in May 1840 at the age of fifty-eight. His body was embalmed, exposed for farewell, and thousands of people came to say goodbye to the genius musician.

It was supposed to be a grand funeral, but unexpectedly for all, the Bishop of Nice banned the funeral of the heretic Paganini at the local cemetery, which was reported to the grieving son of the musician Aquila.

I had to quickly find a place for burial. We decided to deliver the body of the musician to his hometown – Genoa. A magnificent nut coffin was secretly loaded onto a ship and delivered to the Genoese port. But the local governor refused even to let the ship into the harbor – a black ingratitude from fellow citizens Paganini, whom he, by the way, bequeathed his amazing violin.

Whatever it was, the ship stood on the Genoese raid for three months. The team claimed that from the hold, where the coffin was, constantly heard the sounds of violin and sorrowful sighs.

In the end, the influential friends of the violinist managed to obtain permission to transfer the remains to the basement of one castle. But even there the coffin did not last long: the servants, one by one, began to demand calculation, claiming that it was flickering in the dark with a devilish light, and strange and eerie sounds rushed from it.

I had to send the coffin to the morgue of the local infirmary. But even there the seemingly accustomed employees mutinied: Paganini’s body inspired indescribable horror on them, and still sighs and sounds of strange music continued from the coffin.

Only in 1842 the violinist’s body managed to finally betray to the ground – true, not at the cemetery, but on the desert cape at the foot of the ancient tower. But two years later the remains were dug up and transported to Nice, hoping to bury them in the cemetery after all.

And again nothing happened – had to put the coffin in the cellar of the country villa of one of Paganini’s friends. He stood there until 1876 (good, no one lived at the villa), and only then it was possible to obtain permission for burial in the Christian way in the local cemetery.

Alas, the posthumous wanderings of the maestro did not end there. In 1893, the coffin was dug up again, as rumors began that strange sounds were heard from under the earth. Exhumation was performed in the presence of the grandson of Paganini, the Czech violinist Frantisek Ondřicek.

The body of the musician has practically decayed, but the head is mysteriously and incomprehensibly preserved. The coffin was closed and … four years later dug again, to bury it in some little-known cemetery. And only then, in 1897, the “posthumous odyssey” of Niccolo Paganini ended.