The imperishable secret of Martyshkino mummies 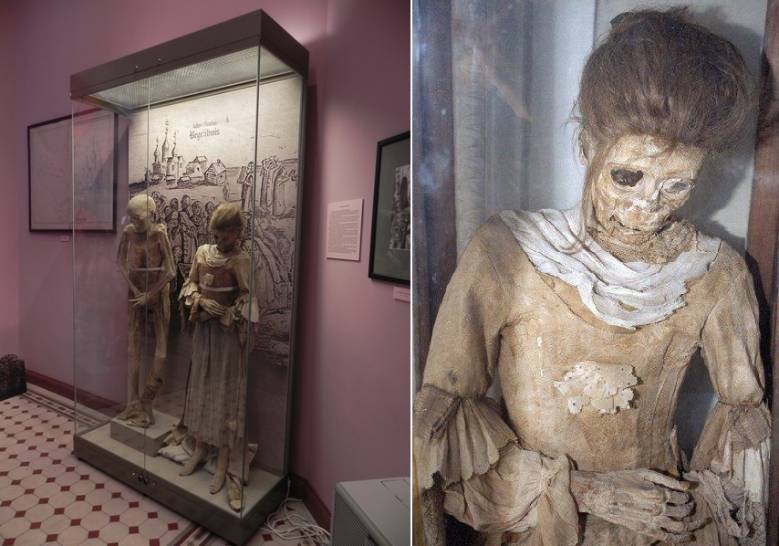 In 1920, a sensational discovery in the village of Martyshkino (in 1935 he was in the city of Lomonosov) struck many seasoned people. In the local cemetery of this village were found the mummies of Peter’s time.

A man and a woman

Age was determined by the clothes. Experts say that the dress, in which clothed mummy women, cost is very expensive. Up to the present day this kind of outfits has survived not more than a dozen. The body of a young person living in the earth more than three hundred years, perfectly preserved.

The mummified body of a man has survived much worse. Ruthless time it is unusually curved and slightly tapered. Dress the descendant of Adam is missing from the clothing accessories, you only have the boot on his left foot. However, the facial features of a former resident monkey preserved. He had a nose with a small hump and a rather sharp chin.

Interestingly, the mummies especially not embalmed and not buried in any special way. According to rumor folk, destroyed the crypt was about twenty mummified bodies. One of them was dressed in rich clothes, and on his chest glittered the deceased of the order. Where is this important Lord — the secret behind seven seals.

But two other mummies that are the narrative passed to the Museum of health care in St. Petersburg, outdoor 21 February 1919 on the initiative of people’s Commissar of health N.. Semashko. To this day they are stored, however, the Museum’s name was changed in 1990 he became known as the Museum of hygiene of the city center of medical prevention of healthcare Committee of St. Petersburg city hall.

And another interesting fact: the Museum staff are convinced that mummies stored in glass cabinets possess some sort of mystical power. Like it or not, hard to say, but time has shown: probably some truth there. During the Second world war, Leningrad was encircled and methodically subjected to shelling and bombing the Nazis.

Museum of health care was at the centre of the city in the former Palace of Prince Igor Shuvalov, President of the Academy of arts, built in 1753-1755. to the design of S. I. Chevakinsky. Now, all the buildings near him were literally riddled with shrapnel, but the Museum didn’t hit any. The employees therefore had the impression: the mummy avert trouble from his refuge in some unknown way.

In the post-perestroika time in the Palace of the Prince more than once attempted various commercial organizations, and it seemed that the Museum would have to vacate the building. However, each new attack invariably retreated.

The question arises: how human remains are well preserved when buried in the land of the village of Martyshkino? This mystery during the existence of mummies in the Museum no one, unfortunately, was not seriously engaged. The secret they have yet to disclose to the researchers. If to speak about the issue of imperishability in General, for modern science it does not exist anymore. It is well known that the decomposition of the dead organisms takes place under the action of putrefactive bacteria.

However, their development requires certain conditions — heat, moisture and oxygen. When the dead body was, for example, in the layers of permafrost, it was preserved for thousands of years. Example of this are all known fossils of mammoths in the far North. Their remains sometimes look like giant hairy elephants were killed just yesterday. A miracle just because of putrefactive bacteria do not live here. No they multiply when dead body is in very dry air or dry soil, and sometimes even in the water, if it has special properties.

Here is just one example. In the XVIII century in England was executed by a professional killer, sent to the other world about twenty victims. Half a century later at the square in London where it happened, in the construction of a new building in the ground was discovered a fossilized corpse. It is so well preserved that it is easily identified by facial features.

The mystery was solved almost immediately. It appeared, in the place where was buried the offender, there was an underground spring, the water of which contained a lot of lime. The corpse was obyzvestvleniya” — covered with a touch of lime, and access to putrefactive bacteria has been closed.

Not uncommon finding the “imperishable relics” of both humans and animals in the Arabian deserts. Here long rains (sometimes for years), and the blazing heat of the sun creates conditions conducive to mummification.

In Mexico in a small town Guanajuato there is an unusual cemetery. Graves made directly at the steep slopes of the hill. The niches are dug out and the deceased, pre-wrapped in a few layers of fabric will prevent them. The dry air of the area and the time that turns the bodies into mummies.

It may well be, in the crypt of the village of Martyshkino nature somehow created the conditions under which the process of decomposition of the dead stopped by itself. Like it or not — the studies show.