The Incredible History of the Sansevero Chapel in Naples 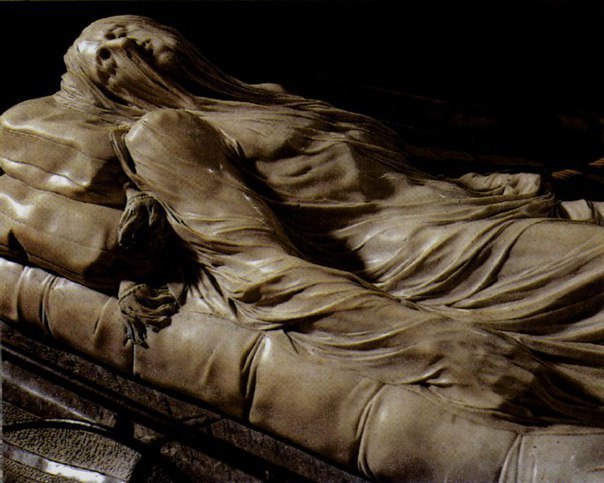 The Sansevero Chapel in Naples is famous for the inexplicable surreal plasticity of the sculptures of unsurpassed beauty that have been an unresolved riddle to researchers and scholars to this day. Statues in literalness can not be called carved, taking into account the nonplastic properties of marble and the possibilities of human instruments.

Indeed, the veil of sculpture “Covered Christ” by Giuseppe Sanmartina and the network of “Modesty” by Antonio Corradini are made … of marble! Literally! Marble “fabric” has a thickness of only 2-3 mm! The visitor is stunned by the very thought that the material of these masterpieces is marble. Human logic seems impossible!

Cutter, chisel and other tools of the sculptor are completely incapable of performing many details recreating the network. Nevertheless, the statues stand in the chapel of Sansevero in Naples and exist as a real proof of the impossible.

(There is an opinion that this is not marble, but a so-called stack (“Stukko (Italian stucco, German stuck) – artificial marble”, analogue of gypsum with marble chips, glue, etc. But this is only an opinion. no one tested experimentally))

The statues have something in common: their sculptors were assisted by a man known as Raimondo di Sangro, the Prince of Sansevero, who was not as adept as the artist, but possessed several special skills. He brought their work to the end, ordering a large number of the most diverse material. As it turns out from the surviving treaty concluded between Prince Raimondo and sculptor Giuseppe Sanmartino on 25/11/1752, marble, that is, a shroud of surreal plasticity that covers the figure of Christ … was once an ordinary cotton sheet, but the fabric literally “petrified” thanks to some strange alchemical process turned into a thin layer of marble!

And if only this … There is another amazing creation of the infamous alchemist, and it causes a shock: two figures, a man and a woman, around the bones of their skeleton with an incredible accuracy wrapped around the cardiovascular system of man and all this … metal !!

Everyone who has seen this amazing installation near, remains struck by the incredible detail with which all human veins and arteries are represented! At the same time, the observer becomes cold, feeling that the terrible rumors about the wizarding start of this project are the true truth … What are these rumors? It sounds terrible – the introduction of some alchemical substances into the blood, led to the transformation of the blood, bones and entrails of the human body into iron, removing them from the natural balance of substances.

According to legend, Prince Raimondo, who “was once a warlock, whose name aroused horror among the people” was looking for volunteers, or the bodies of recently deceased people with the goal of “carrying their art over them.”

Not surprisingly, these sculptures caused a huge amount of gossip and wild speculation. Some accused Prince Raimondo of “kidnapping people in order to carry out disgusting experiments on their bodies.” And, probably, had a reason – there is a small “anomaly”: a small depression appears in the nostrils, as if the veil penetrated deep into the fact that the person desperately tried to breathe air. “He who served as a model, was alive or dead,” the contemporaries of these sculptors asked, and we, too, …

Prince Raimondo was a great admirer of Leonardo da Vinci, an inventor, scientist and artist who was interested in both anatomy and alchemy, and he himself was known as an inventor: as a student, he impressed his teachers with the production of a counting machine that could add numbers. Like Leonardo da Vinci, he had a passion for military vehicles. It is known that Raimondo was a high-degree Mason, in fact, the head of the Masonic lodge of Naples, until he was excommunicated. It is curious, however, that Pope Benedict XIV soon abolished this excommunication. According to some, this was due to the fact that the pope found that all the charges against the prince were only “a product of envy and slander of his personal enemies.” For others, and this is more like the truth, pardon was the result of Vatican’s political maneuvers.

Prince Raimondo was also associated with Count Cagliostro. This is another mysterious and paradoxical personality, as well as one of the most famous masons of the time, who, as claimed, inspired Raimondo di Sangro to study occult and alchemical traditions …