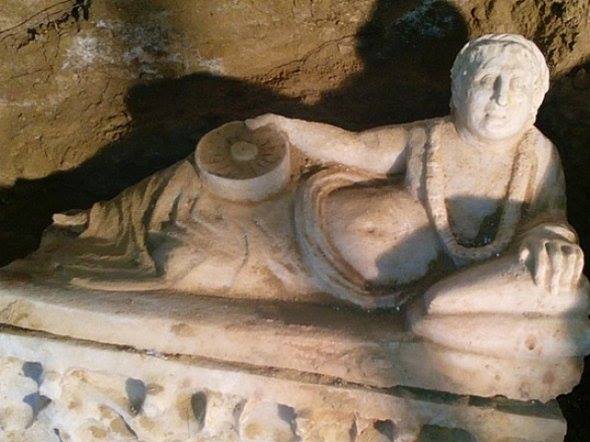 An Italian farmer plowed a field near the small town of Citta della Pieve (Umbria, the central part of the country) when he discovered under the plow some kind of emptiness. Arriving at the site of the find, archaeologists quickly realized that before them was the Etruscan grave.

The tomb in Citta della Pieve is far from the famous Etruscan necropolises, perhaps, therefore, it remained undisturbed. The funerary structure consists of a dromos (corridor) and a rectangular burial chamber. The entrance to the last one was closed with double-leafed stone doors. Inside there were 2 sarcophagi, 4 marble urns and various funeral implements. Unfortunately, the details of the finding are still small.
It is known, however, that on both sarcophagi there are inscriptions.

In one of them archaeologists read the word “Laris”. It is a common male name among the Etruscans. Inside the sarcophagus was the skeleton of a man, so this name, most likely, belonged to the buried. Further decoding of the inscription (and it is quite long), as the researchers hope, will allow to learn more about the buried – for example, the names of his parents, and perhaps, his age.

The 2nd sarcophagus is covered with painted plaster. It also has an inscription, but it has not yet been deciphered.