The Legend of the Flying Dutchman 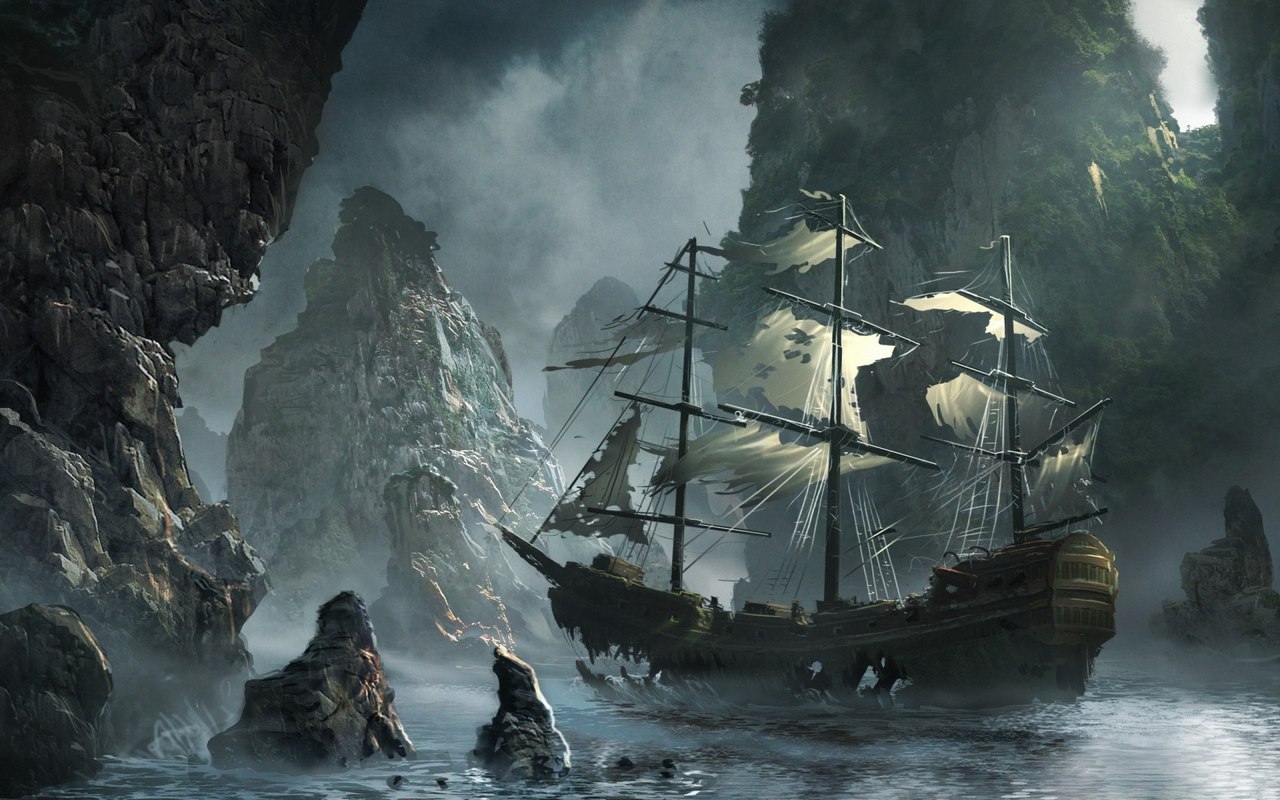 Among all sea myths and legends, perhaps, one of the most famous is the legend of the Flying Dutchman. Many people reported that they saw the ship of Captain Van der Decken since it sank in 1641. For his insolence and blasphemy, the captain, nicknamed the Flying Dutchman and his team are doomed to plow the sea until the Day of Judgment.

The ship van der Decken made a commercial flight from Holland to eastern India. After the holds were up to the top filled with silk, spices and other expensive goods, the ship went back to Amsterdam. Skirting the southern coast of Africa, the captain reflected that it would not hurt near the Cape of Good Hope to build a resting place where you can moor and rest before storming raging waves. 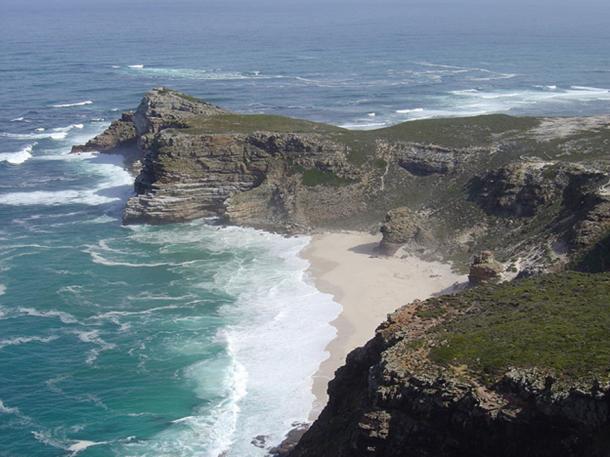 When the ship began to circle the cape, the captain was deeply absorbed in his thoughts. Suddenly a terrible gust of wind threatened to overthrow the ship. The sailors urged the captain to turn back, but van der Decken flatly refused. Some believe that he fell into insanity, others – that he was drunk, but in any case, the captain ordered the team to move forward. He lit his pipe and smoked, watching the huge waves pound against the side. Werther broke the sails, and water penetrated into the hold, but the captain stubbornly followed his course, vomiting blasphemous curse. 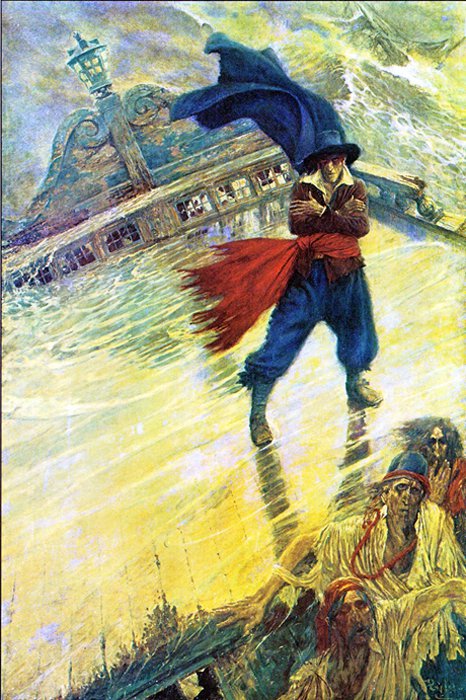 The command, brought to the limit, rebelled. Without any hesitation, the captain shot and killed the instigator of the riot and threw his body into the raging waters. At the moment when the corpse touched the water, a voice was heard asking if Van der Decken wished to wait this night in the bay. But the impudent sailor replied: “I’ll be damned if I get out of the way, even if I have to hang out here until the day of judgment!” ” 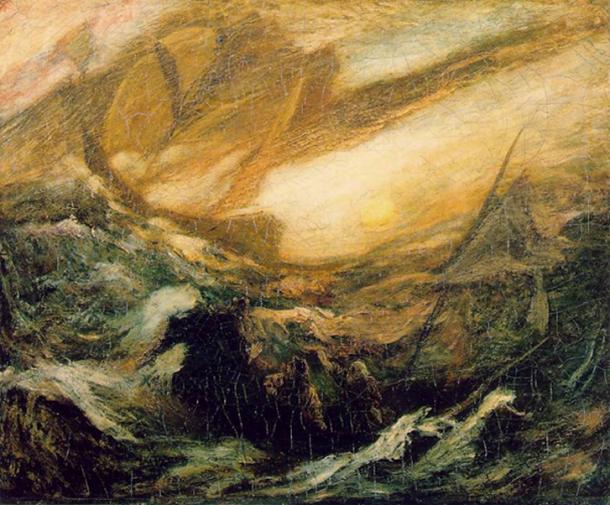 And then the voice spoke again: “You are destined to swim on the ocean forever with a team of dead people, carrying death to everyone who saw your ghost ship, and you will never come to any port, and you will not know a single second of rest. Bile will be your wine and hot iron with your meat! “Hearing this sentence, the captain, without batting an eyelid, exclaimed:” So be it! ”

Since that time, Captain Van der Decken, nicknamed the Flying Dutchman, is floating on his ship. Experienced sailors say that the ships that meet him are straying off their way, pinned on the reefs and hidden stones under the water. There is a belief that if you peer into the waves raging at the Cape of Good Hope, you can see the captain at the head of his skeleton team. But be careful, according to the legend, anyone who sees the Dutchman will necessarily die a terrible death.

The legend of the Flying Dutchman gained fame in 1843 thanks to the opera of the same name by Wagner. But the reason that this legend is alive to this day, inspiring many authors (from Wagner and Coleridge to the creators of the cartoon “Sponge Bob”) lies in the fact that many are convinced that they saw a ghost ship. 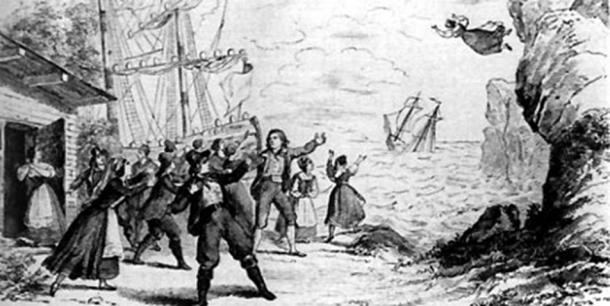 The last scene from Wagner’s opera The Flying Dutchman (1843)

One of the most famous meetings occurred on July 11, 1881. With the Flying Dutchman collided Prince of Wales George (future King George V) and his brother Prince Albert Victor, sailed off the coast of Australia. After Prince George wrote in his diary:

«11 July. At 4 am we met the Flying Dutchman. A strange red light surrounded the ghost ship with its masts, spars and sails. The schooner was two hundred yards behind and to the left aboard, where the watch officer saw her. The stern midshipman was immediately sent to the tank, but arriving there, he did not see the slightest trace of any ship, only a clean calm sea to the horizon. In total, the schooner was seen by thirteen people, and at 10:45 am the sailor, the first to report the appearance of the Flying Dutchman, fell from the mainmast to a half-tank and died to death. ”

Modern scientists hold the opinion that the ship of the Dutchman is nothing more than a mirage, the reflection of rays of light from the ocean water.