The Mars Project: The Prophecy of Werner von Braun

Wernher von Braun in 1949 finished writing a book he had begun back in the 1940s, but it was not published for the first time until 1952. Ilon Musk’s plans to fly to Mars are widely publicized, but what is striking is that in addition to the calculations and drawings of rockets to fly to Mars, Brown’s book contains a striking coincidence: “The Martian government was run by ten men, whose leader was elected by popular vote for five years and was called ‘Elon’… Why did Brown use that particular name? After all, Elon Musk is Elon Musk. Would you agree that the name Elon, is rare enough that it’s just an amazing coincidence or prophecy?

This never-before-published science fiction novel by the original “rocket man” Werner von Braun combines technical facts with human history in a way that only a true dreamer can understand. Covering the entire story of the journey, this novel moves from the initial decision to go to Mars to the planning of the mission, the construction of mighty spaceships, the journey, the amazing discoveries made on Mars, and the return home. The author’s attention to the actions and feelings of the characters, both those who left and those who stayed, makes this a human-scale adventure, not just another sci-fi tale. Included with this exclusive Von Braun treasure is an appendix with his original technical drawings from the late 1940s on which the story’s plot is based.

“It has long been recognized that Mars is the planet in our solar system most capable of supporting life. In 1949, when this book was written, Wernher von Braun was convinced that an underground civilization existed on Mars that was more or less equal to our own. And it is a peaceful civilization, seeking neither conquest nor paranoia about attack. In this story of the first human mission to Mars, ten spacecraft make the journey to the Red Planet.

Up to 1,000 missions to orbit Earth required to build, supply and fuel these ten ships. This was an international collaborative project.

The mission plan does not include a stay to colonize or set up a Martian base, which, again, is realistic for a first mission, von Braun did a tremendous job preparing the plot for this story. The calculations and technical drawings he developed for the mission to Mars, and on which he then based the story, are included in the 65-page appendix to this book.

This book can also be seen as a proposal–for international cooperation in human missions to Mars. Von Braun clearly believed this was possible (the action of this story takes place in the 1980s) and went to great lengths to prove it, both in his professional work and in his writing.

When this story was written in 1949, a manned flight to Mars was considered science fiction for the average person, but very few today deny that it is possible. The reasons we still haven’t done it are economic, not technical.” 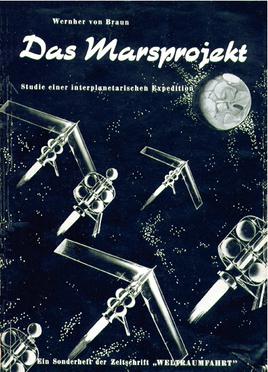 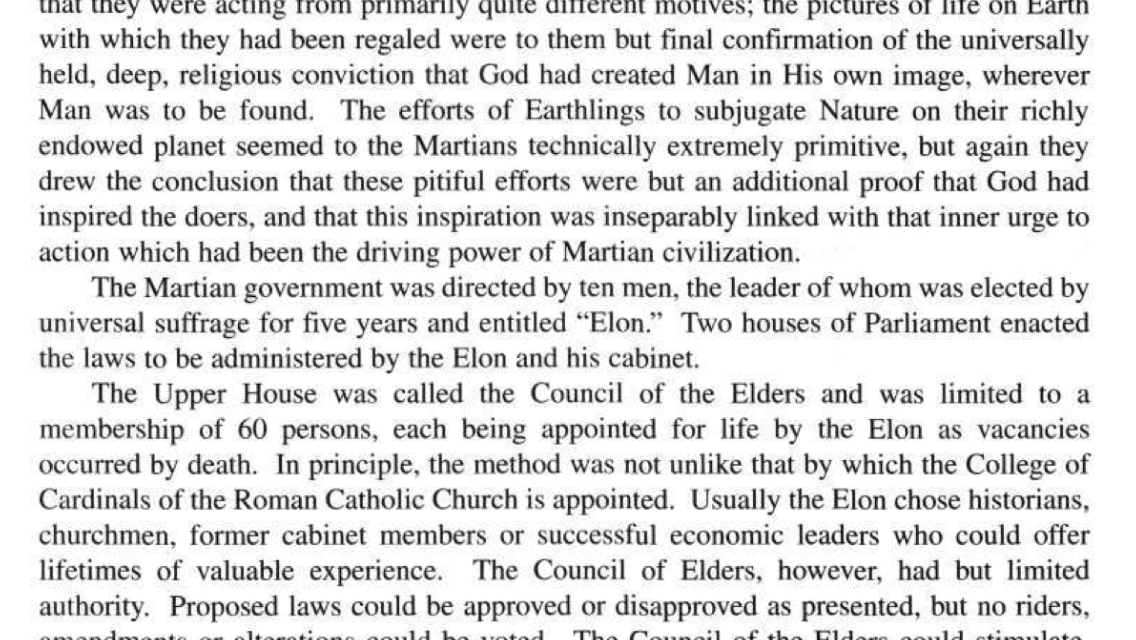 Excerpt from chapter 24 of the book:

“How Mars is Ruled.

Long and tedious were the official receptions of the three Erflings by the Martian authorities. Holt and his two companions finally found enough free time to compose for themselves a coherent picture of the great variety of new impressions with which their week of greetings had showered them.

Not once did they feel any suspicion that their arrival from the depths of space might be due to anything other than the friendliest of feelings and intentions. At first they thought that perhaps the Martian consciousness of absolute technical superiority over the Earthlings was the basis for the dignified courtesy and attention shown to them by the dignitaries. After all, an interplanetary visit could not have been an ordinary event even in their lives. But gradually Holt and his companions began to realize. that they were acting primarily out of entirely different motives; the pictures of life on Earth they were enjoying were to them only the final confirmation of the universal deep religious conviction that God had created man in his own image, wherever he was.  Earthmen’s attempts to subjugate nature on their planet seemed to the Martians to be technically extremely primitive.

The Martian government was run by ten men, whose leader was elected by popular vote for five years and called Elon. The two houses of parliament made the laws that Elon and his cabinet were to administer. The upper house was called the Council of Elders and consisted of only 60 people, each appointed by Elon for life as vacancies occurred.”