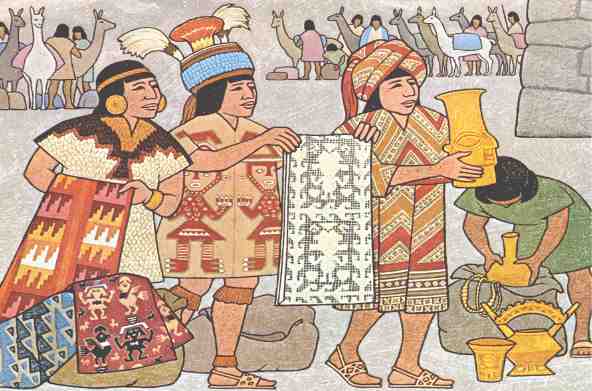 “Gold” — that magic word that attracted the Spaniards across the Atlantic ocean. On the Indian question, why white people are so fond of gold, Spanish Conquistador hernán cortés was able to answer only that “they suffer from a specific heart disease, to cure which can only be gold.” For the Incas, gold was the only sacred metal of the Sun God. 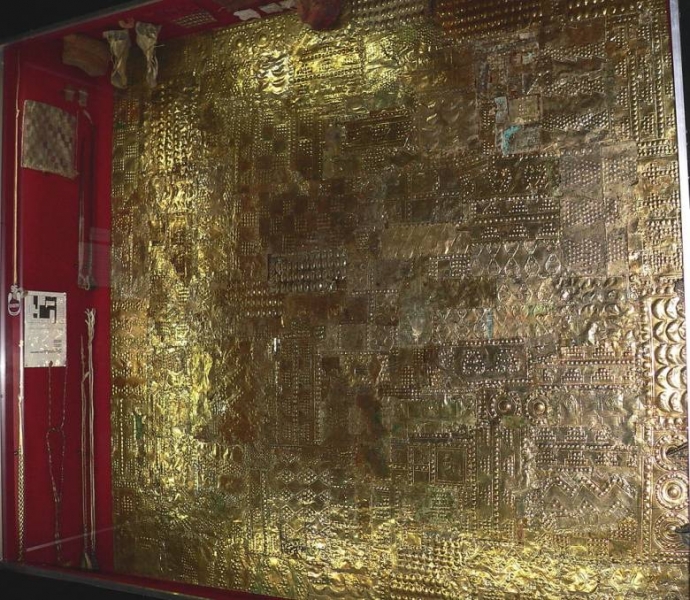 The Golden wall of the Incas in the Museum of Peru

When Francisco Cortez, another Spanish Conquistador, captured the Inca leader Atahualpa, he offered for his freedom as much gold that they can use to cover the floor in the room where they were sitting. But, apparently, seeing mistrust in the eyes of the Spaniards, said that gold will be in this room for more growth. And Pizarro agreed.

Throughout the Empire of the Incas was Atahualpa sent messengers with a pile — a fringe of long cords tied in knots in various ways: the Incas used nodular letter. The subjects of the chief had collected for the ransom Golden vessels and ornaments of palaces, temples and public buildings. Few weeks room volume of about 70 cubic meters was filled with gold and silver, and Pizarro became the owner of the treasure, which had no European monarch.

In 1533, at the sunset of the Inca Empire, on the coast of South America landed not too many Spaniards. But, skillfully taking advantage of the internecine war between the heirs of the Great Inca brothers Atahualpa and Ascaron, they quickly became actual masters of the country. 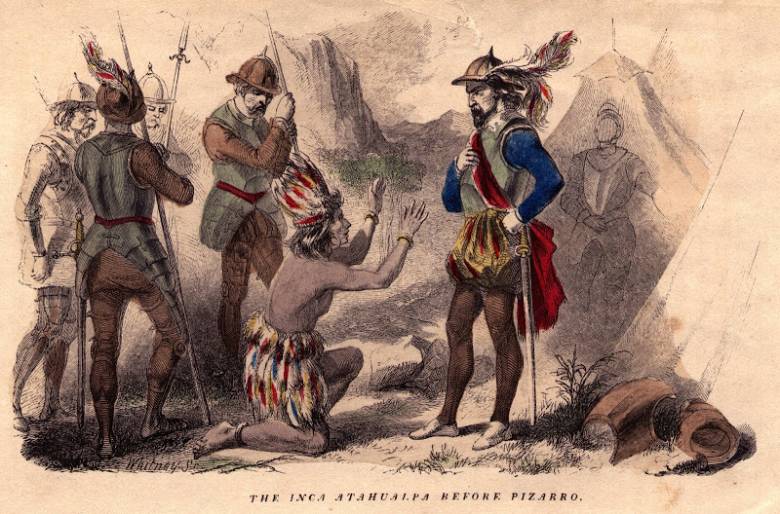 Pizarro promised Atahualpa assistance in dealing with his brother, lured to his camp and actually captured. The treacherous Spaniard did not let him and after he filled the notorious the room with gold. Pissarro knew that gold from the Indians there are still a lot.

Atahualpa, being in captivity, has succeeded in killing his opponent. Pizarro ordered to kill Mascara, but immediately accused Atahualpa in fratricide and condemned the Spanish law. 24 August 1533 Atahualpa was sentenced to death at the stake. Inka had agreed to renounce the laws of their ancestors and be baptized… And “the servant of God Francisco de Atahualpa” godson Pizarro, burned, and strangled… the iron collar of the garrote.

Before the death of Atahualpa was able to convey to faithful men his last farewell letter. What was in him is unknown, but the remaining gold of the Inca Empire disappeared without a trace…

A few months later the Spaniards were to March on the Empire’s capital — the sacred city of Cusco. They were attracted by the building of the coricancha — the Sun temple, surrounded by a cornice of pure gold, soldered into stones. Of gold have been made and the statue of the Sun, and the statues of other gods, as well as the famous large disk embodying the Incubator. Were in the Golden temple and numerous musical instruments, such as drums, decorated to the same precious stones. 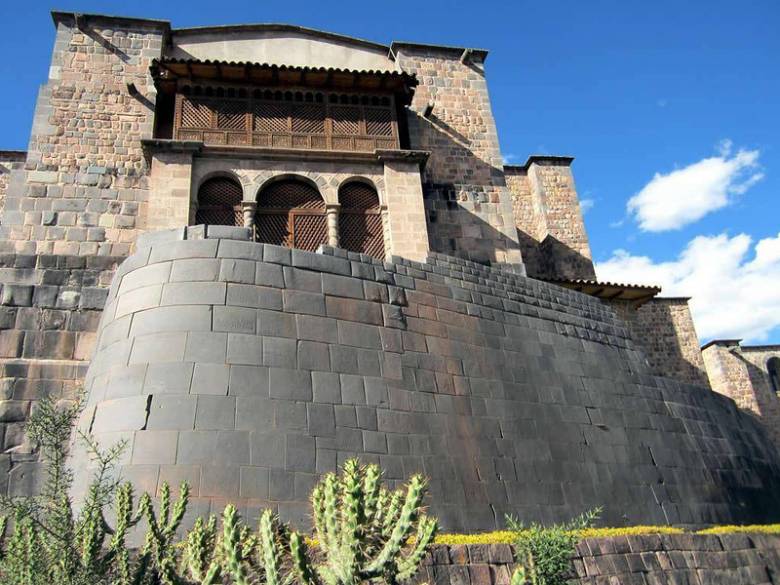 Qorikancha (Coricancha) was destroyed after the invasion of the conquistadors.

Currently, the city of Cusco in Peru, the ruins of the temple. After a major earthquake in 1650, over them was built the Cathedral of Santo Domingo (St. Dominic).

When the temple was still Golden garden. One of his men described it this way:

“In the garden, it was planted with the most beautiful trees, the wonderful flowers and fragrant herbs that only grew in the Kingdom. Many of them were cast in gold and silver, and each plant depicted more than once, and from small, barely visible above the ground escape to a Bush in full growth and perfect maturity.

There we saw the fields covered with corn. The stems of it were of silver, and the cobs of gold, and it is all depicted so truthfully that it was possible to see the leaves, grains and even strips on them. In addition to these wonders in the garden of the Incas were all kinds of animals and beasts, cast in gold and silver, such as rabbits, mice, snakes, lizards, butterflies, foxes and wild cats.

We found there, and of birds, and they sat like they were about to sing, others like swaying on the flowers and drank nectar. And there were still Golden deer and deer, Cougars and jaguars — all the animals in the small and in adulthood. And each of them at the appropriate position, as befits his nature.”

The city’s main square was surrounded by a chain of pure gold, in length of 350 steps (about 250 meters), weighing several tons. During religious festivals the Incas were dancing, holding it in his hands, and to do that, it required the strength of two hundred people. 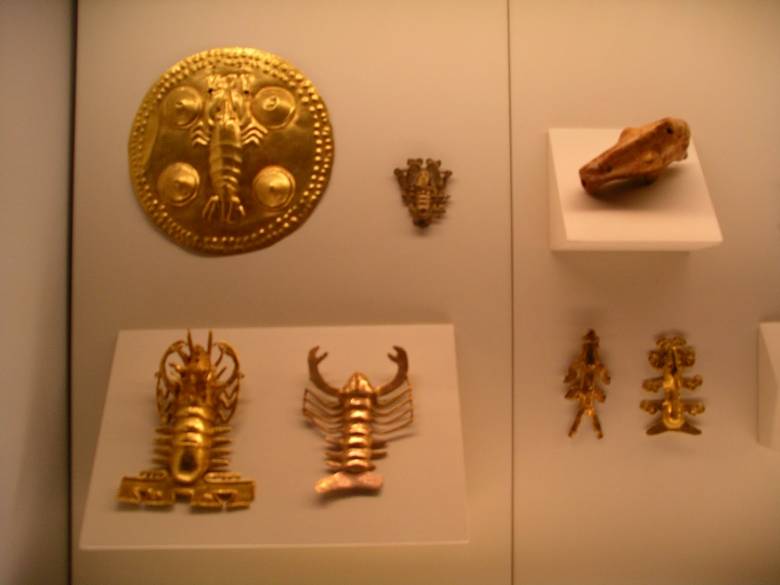 The gold of the Incas in the Museum

But coming to the Indian capital, white people discovered that all of this is unheard of wealth, all the gold had disappeared. Was out of town and Indians.

Francisco de Perez in his essay “the Conquest of Peru and of Cuzco province,” wrote;

“But when, after the conquest of the country Inca Manco II met with the Spanish Ambassador, he poured him a bowl of corn kernels. And picked up one of them said; “that’s all you could steal from our gold and pointed to the rest: “And that’s remained with us”.

Until now, historians argue about where the vanished wealth of the Inca Empire. Many people assume that their treasures the Indians could hide in the Peruvian jungle, in the legendary city of Paytiti, founded as a staging post between the capital and gold mines.

This city is considered just a legend until the beginning of XX century there was not by accident two employees of one of the Hacienda, who had escaped from the owner.

For four days they struggled through the impassable jungle, and on the fifth day was in an abandoned city, destroyed all the buildings which were filled with many gold items.

Taking as much as they could carry, the fugitives managed to find a way to civilization. But, realizing that people are close, they began to divide the treasure, and in Cuzco he returned only one of them. To find again the road to the Golden city he could not private greed has cursed him…

In 1925 to find an ancient city decided six members of the Catholic Order of the Jesuits. Hire a dozen porters and guides, they set off. But on the road they were attacked by the Indians, and to escape from the poisonous arrows was only for the conductor to Sanchez.

He only found the city filled with Golden statues. There, Sanchez cut off the little finger of one of them to have proof that he’s not crazy. But his precious discovery, fearing the wrath of the Indian gods, all his life he was kept confidential and was opened only before the death of the scientist R. I. Ordonez. 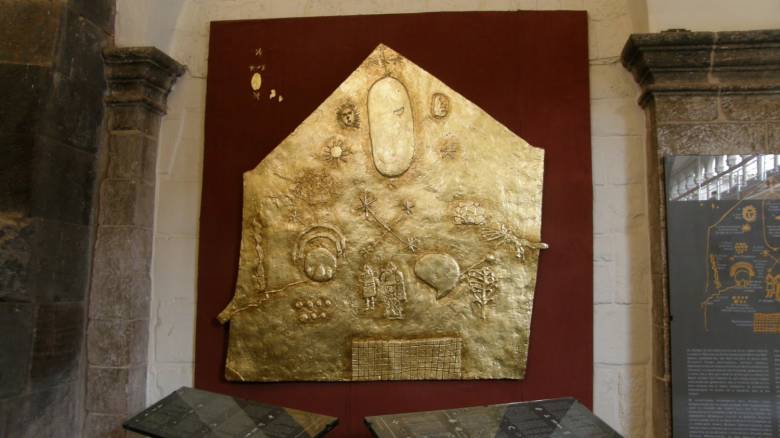 He accepted him dying and sent an expedition. But despite lavishly subsidized the quest “city of gold” was never found. After years of failed searches, many decided that ODonis just making a name for himself, buying a finger on any sale.

There’s a new version of where lie the treasure of the Incas. The views of white people have turned to the volcano El Sangay, located at the junction of the Western and Eastern parts of the Cordillera. Sangay, a sacred Fire God of the ancient Incas, and the slopes of the volcanoes serve Indian tribe of hivaro the burial place of chiefs and heroes to this day.

Dr. Kurt von Ritter from Quito, the Ecuadorian of German origin, in the early 1960s began to develop this version, and even lived for a time in the tribe of hivaro Indians, known as the “bounty hunters”. Inquiring of the Indians about the discoveries on the slopes of the mountain, he received in his hands the tiny carved figurine of the Inca goddess of Creation Ilya-Tick, cast in pure gold

After the doctor showed the place of discovery is high, more than two thousand meters, the cliff, turning into a gigantic gorge, Ritter began excavations. And very soon found a human skull, whose owner at life underwent complicated surgery. It is known that the Incas not only in surgery, but also successfully carried out craniotomy. Soon archaeologists and scalpel — thin gold plate.

Returning to Quito, Ritter published information about the findings, but warned that it is hardly possible to find a treasure without . very large investments, the volcano continues to operate, and every year it is the ash raises the soil level at the Sangay at least a few inches.

Despite the warnings of the scientist, in Ecuador, began a genuine gold rush. Amassing teams of navvies were hired professionals, to look for investment… Another thing is that to find the right amount for the excavation so anybody and could not. But nobody stopped…

A month later, to the foot of Sangay arrived first expedition. It was two young Americans, Frank Rocco of Pennsylvania, and Robert Kaupp from California. The official purpose of the expedition was the search of the “precious metals”. Americans should be down in Quito for Christmas, but never showed up. In mid-January after them went the United of the U.S.-Ecuador is a rescue expedition.

Almost at the crater of the volcano was discovered last their Parking lot. Snow was scattered belongings and traces of the Americans lost on the way to the valley of Culebrillas. Descending into the valley, the expedition discovered collapsed on the floor of the Indian hut dying from exhaustion Robert Kauppa. He said that when he and Frank Rocco almost climbed to the top of Sangay, I felt I can’t breathe because of the poisonous volcanic gases, and with them became something incomprehensible.

Americans swept out of anger, their minds clouded, they fail to figure out where they are and where they should go. Soon, they somehow appeared on the Eastern side of the volcano, although raised in the South, the one where Ritter had found the gold. Coup began to persuade Rocco to return to the last camp, but he refused: “here It is, Kaupp. I feel it here.”

Kaupp abandoned insane friend, and he does not remember what was at the bottom. He was sent to the hospital in Riobamba. A few days later was discharged from there, he disappeared. Tried to find it, to read and understand, not seen the Americans something that would bring on a trace of gold. But to no avail.

Soon one of the members of the rescue expedition gave an interview to a local newspaper. He argued that the rescuers found two sets of footprints, stretching on the Eastern slope, then flattened the snow — signs of a struggle, and then there were only one traces. Blood, however, claimed the rescue was not. Soon came another American expedition, sponsored by the relatives of Rocco, but she was unable to find either the Rocco or any traces of his stay in the mountains.

Several expeditions tried to find the gold, and returned from Sangay with empty hands. Many said that Dr. Ritter just tossed on the mountain, bought on the occasion of Indian curiosities, to make a name for himself in scientific circles. But clear evidence confirming this or disproving it, is not so far.