The monster of the Yakut Lake Khaiyr 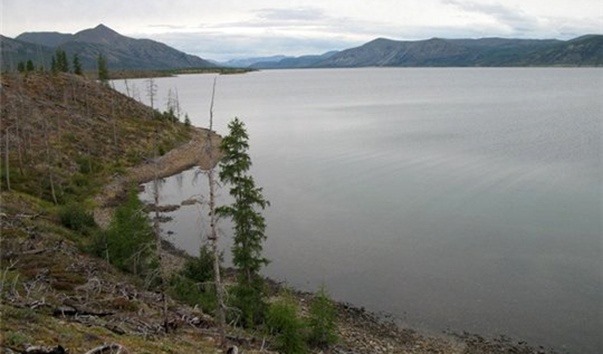 Lake Khayyr (Pestsovoye Lake) is a reservoir in the north of Yakutia beyond the Arctic Circle, where, according to testimony of some eyewitnesses, a huge animal of an unknown species would have to live, similar or coinciding in description with the “devil” from other Yakutian lakes Labykyr and Gates.

In 1939-1940, the famous Russian pilot Valentin Akkuratov often had to fly over these places. And once from a height of 700-800 meters he noticed two long dark spots on the lake.

Decreasing to a height of 50 meters, the navigator clearly saw the large bodies of unknown animals, who, frightened by the noise of the engine, disappeared into the depths. It turned out that there are at least two large animals in Lake Khayyyr. But the genuine interest in the lake appeared only after a quarter of a century.

In 1964, the deputy head of the North-Eastern expedition of the Moscow State University G.N. Rususuyev said that a mysterious animal with a long snake head lives in Khayyyr. Member of the biological expeditionary squad of the Yakutsk branch of the Department of the USSR Academy of Sciences Smoothkih left such a written observation:

“At 7 am I took the buckets and went to the lake for water. I used to hear about the existence of the “devil” in the lake, but I do not believe in evil spirit, so I walked to the lake without bothering, looking at my feet to avoid stumbling. Not reaching 15-20 meters, I heard something like a splash, I saw that an animal unknown to me crawled out of the water. His body was 4-4.5 meters in length, 1.5-2 meters high, his neck long – perhaps a meter and a half, and a flat small head, like a snake.

Its color is dark blue with a low tide, the skin is smooth. It seemed to me that it was eating grass. I … involuntarily dropped buckets, “monster” turned its snake head in my direction. I hardly remember the future, because I was very excited … I shouted loudly, ran headlong to our camp, but, unfortunately, the detachment’s officers were not in the camp at that time. When I looked at the lake, I saw that the waves dispersed along it, although there was no wind, the weather was quiet … ”

A creature from Lake Khayyr (picture of eyewitness N. Gladkikh)

In the following year, in 1965, a group of sportsmen-submariners and tourists set out to search for the “devil”, but in the lake (despite careful research) she did not find anything, but limited herself to gathering legends and asking local residents from the nearby village of Khayyr.

According to their conclusions, the stories of the Yakuts about lake monsters are associated only with the “pike-bull”, i.e. Simply with a large pike, possibly inhabiting here. The expedition also concluded that Nikolai Gladkikh could not observe the monster in this lake.

Later, Gladkikh himself made a statement that he came up with the whole story. By the way, nothing is known about the reaction to his confession.

It would seem that the sensation is debunked and there is no monster in the lake. But not everything was so simple.

Three decades later they began talking about Hayyr again. This time – after the appearance on the lake of researchers of the biological unit of the Yakutsk branch of the Russian Academy of Sciences. The detachment investigated the Quaternary deposits of the Kular range, the scientists broke their camp on the shore of the lake.

One day near the parking lot from the depths of the lake, the head first appeared on the surface, then the fin on its back. The long tail of a lizard struck the water.

The residents of a small Yakut village, located nearby, managed to find out that on the lake and to this day from time to time there are deaf sounds and strange splashes.