The most amazing finds of archaeologists 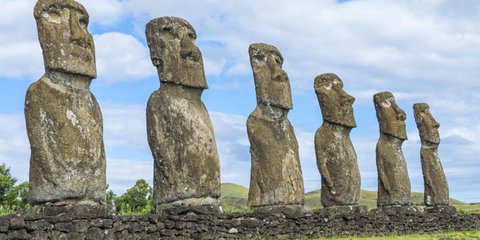 For two centuries, archaeologists have made many outstanding discoveries. Here are just some of them.

An empty room in the pyramid of Cheops

The pyramid of Cheops was built about 4,5 thousand years ago – between 2509 and 2483 years BC. However, it still surprises.

A group of international scientists found an unknown building in the very center of the pyramid. In length, the secret room – about 30 meters, and in height – about 2 meters.

Scientists do not know what’s in the room, because it’s impossible to get into it. One of the options offered by scientists is to drill a three-centimeter hole and run inside the robot.

The Chinese emperors did not waste their time on trifles. Emperor Qin Shihuandi ascended the throne at age 13 and a year later ordered the building of a tomb.

Yes, not just a tomb, but with a whole army that was supposed to accompany him in the afterlife. Near the emperor’s mausoleum were buried at least 8100 full-size terracotta statues of Chinese soldiers and their horses.

Built this clay army for about 40 years, a total of 700 thousand people. It is believed that some of the workers were slaves and executed after the construction of the tomb.

Ancient Egyptian hieroglyphs were deciphered thanks to the rosetta stone. Plate found the French in Egypt in 1799. Defeated in Africa, Napoleonic troops gave the find to the British. Now the stone can be seen in the British Museum of London.

On the Rosetta stone, three texts, identical in meaning, were knocked out, but written:

He deciphered the ancient Egyptian hieroglyphs of the French orientalist Jean-Francois Champollion. Even the date is known, when he finally read the text, on September 14, 1822. It is generally accepted that the science of Egyptology originated from this discovery.

One of the most interesting finds of 2016 is connected with the capital of England. Archaeologists found a wax tablet with the first surviving mention of London. It was dated 65-80 years of our era.

On the plate is written the “postal” address: Londinio Mogontio. In translation, this means: “Mogontia to London.”

Previously, the oldest written source, which refers to London, dated the 117th year. This is the text of the Roman historian Tacitus.

The Secret Room of My Street

Moscow is not far behind London. In 2017, archaeologists found a secret room from the time of Ivan the Terrible in front of the Church of St. John the Evangelist at Vyaz.

According to scientists, there was once the Theological Tower of Kitaygorodskaya wall. The opening was made during the preparation for the improvement of the program “My Street”.

There is a version that, while in a secret room, defending soldiers could watch the enemy on the other side of the wall. Next to the room were found stone cores. It was a fighting depot of medieval artillerymen.

The island of Easter owes its name to the Dutch traveler Jakob Roggeven. The navigator opened it on Easter Sunday 1722.

The island is famous all over the world for its giant moai statues. The height of the statues in the form of a human head with a truncated body reaches 20 meters. The largest is called El Gigante and weighs 270 tons.

Statues were carved in the quarries of the crater, but scientists still do not know how the Aborigines were able to move them for many kilometers. It is known about more than 900 monuments, of which over 230 are located on the island.

An interesting fact: moai look deep into the island, and do not peer into the ocean.

The remains of the legendary ancient Greek city of Troy were discovered in 1865 in northwestern Anatolia on the territory of modern Turkey.

Troy became famous thanks to the poet Homer, who sang the events of the Trojan War in the poem “Iliad”. Troy fell after the clever plan of Odysseus. The ancient Greeks built a giant horse and put soldiers in the belly. Then they left the “trophy” in front of the gates of the fortress, but left.

On their misfortune Trojans brought a horse into the city. The soldiers got out and opened the gates to the returning Greeks. The city fell.