“The Mountain of Fearlessness” in Sri Lanka 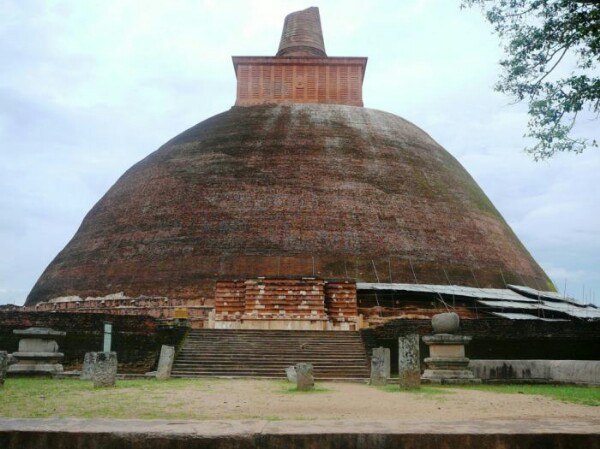 In the Indian Ocean, off the southeast coast of India, is located the exotic island of Sri Lanka. Previously, this island was called Ceylon and was part of the British colony. Sri Lanka annually receives a huge number of tourists. The sights of the island are striking in beauty and variety. One of such wonderful places is Mount Abhayagiri, fanned by centuries-old riddles. Archaeologists managed to restore most of this amazing place.

In translation, Abhayagiri sounds like “Mountain of Fearlessness”. At its top is an ancient monastery – vihara. This monastery was built by King Walagambahu in the I century BC. e. for the monks. Here they found their refuge, driven from their native places because of the worship of Mahayana (the direction of Buddhism). Their teaching recognized the existence of the gods and spread far beyond the monastery, attracting followers around the world. On the mountain was built a majestic complex, which includes a large number of buildings. Unfortunately, not all of them have survived to our times. But archaeologists managed to establish that the main building housed a library, rooms for teachers and classes for classes. On the territory of the complex were cells, in which lived the monks who were trained. There was also a grand hall for Assemblies – Sunnipathasala. It was a room without a roof and had four exits. Also the complex had its refectory, a hospital and even a cemetery.

It is striking that in the monastery was carried out a whole water supply system. The building was supplied with hot and cold water, toilets were built. The water was supplied from the pool of Et Pokūn located on the territory of the complex. There were also swimming pools – twins (Kuttam Pokuna), who performed water purification, with the help of original filters. In the pools there were stone staircases through which the monks sank into the water for ablution. The granite walls of Kuttam Pokun were decorated with images of a cobra with five heads. This animal was considered sacred. The pools of the twins are recognized as miracles of engineering. All the buildings were struck by the richness of the furnishings and the subtle and skilful work of the masters of that time. The roofs are made of bronze and decorated with tiles. The cells were two-story buildings, tiled, and their roofs were ceramic. But the most beautiful building was the dagobah. According to legend, it was built on the spot where the footprint of the Buddha remained. Decorated with gold, silver and the famous moonstone. Around there towered huge stone walls, which surrounded countless water bodies. The building was one of the seven holy places of Anuradhapura. The height of the dagobah was 115 meters. Until now, only a part of it has survived. A special attraction of the monastery is the Buddha statue. The deity is depicted during meditation. A statue made of granite is made. In general, on the territory of the complex there are 3 statues of Samadhi Buddha.

Another unique building, located on the territory of the complex – Stupa Lankarama. She, as well as the dagobah, was built on a typo of the Buddha’s foot. The roof of the building was supported by 88 columns, arranged in three rows around the Stupa. It was built by King Walagamba. The Golden Age of Abhayagiri is the reign of King Mahasena. At that time the monastery numbered about 5 thousand novices. Here, even the tooth of the Buddha was kept, which, it was believed, gave the ruler supernatural powers. Now all the Buddhists of the world make a pilgrimage to these places, which are sacred to them. The mystery of history is that once all the monks who lived here disappeared and to this day their footprints have not been found. There is a legend that monks were able to turn their bodies into light and moved to Shambhala (a mythical country in Tibet), continued to live in the lands of the “Great King of the World.” But no one could confirm or deny this legend.