The Mysteries Of Ancient Egypt 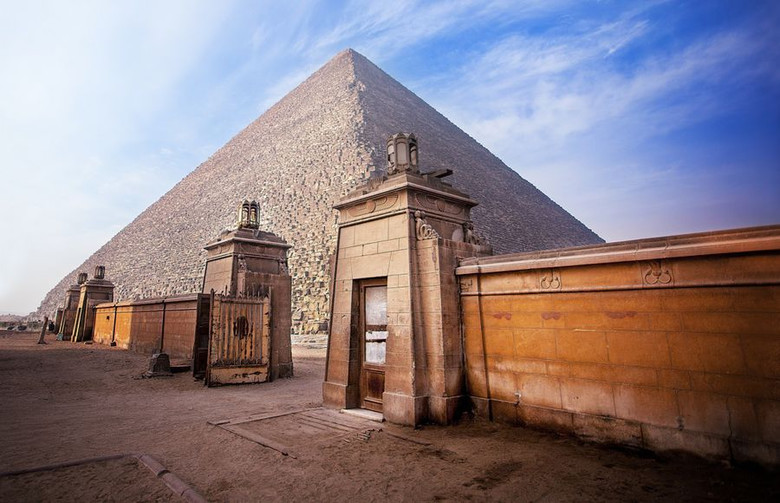 Many researchers again and again draw attention to the Egyptian and Mexican pyramids that still keep lots of secrets. Why the people worked so long and hard, building a truly Titanic structures?

So, according to Herodotus, the construction of just one pyramid of Cheops in hard conditions worked about 100 thousand people for 30 years. And all just so the Pharaoh had a place to rest?

In fact started to doubt even one hundred and fifty years ago. Some scientists-Egyptologists do not believe that the construction of the great pyramid was associated with Cheops. In 1850, close to the pyramid was excavated a stone stele, the inscription on which, according to historian Zechariah Sitchin, suggests that the pyramid and the Sphinx to the time of the appearance of Cheops had already been built.

And according to ancient Arab sources, esoteric legends and astronomical data are real-time creation of the pyramids is comparable with the period of existence of the legendary Atlantis, i.e. they were built about 13,000 years ago.

The Atlanteans, in turn, are often considered representatives of other civilizations that once landed on our planet for research purposes or perhaps accidentally, by reason of the accident of his ship.

Anyway, they were on the planet and made their own rules. Whether they did it deliberately or they happened by accident — just surrounding people, taking them for deities, began to learn from them — we probably do not know.

Do you know what is a cult? It is the religion of the so-called samoletostroenie or the cult of heavenly Gifts — a term which means a group of religious movements in Melanesia. The cult recorded since the nineteenth century, but particularly they became widespread after the Second world war.

The Americans fought with the Japanese, were placed on Pacific Islands its military bases. They built a runway on which the aircraft landed. Sometimes the planes don’t sit down and just dumped the load and flew back. In General, flew from the sky or falling load.

The islanders had never seen white people, so with interest I watched them. Especially because they had so many interesting things: lighters, flashlights, beautiful tins with jam, steel knives, clothes with shiny buttons, shoes, tents, beautiful pictures with white women, bottles of fire water and so on. The natives saw that all these items were delivered to a load from the sky. It was all so amazing!

The natives also have found that to get all these fabulous benefits Americans have not worked. Instead, they marked out on the ground of a mysterious band, wore headphones and shouting incomprehensible words. Then they shone in the sky bonfires or floodlights, waving flags and flew from the sky iron birds and bring them cargo – all these wonderful things that the Americans gave to the islanders in exchange for coconuts, conch and favor with the young locals.

Then the war ended, the Americans turned to the tent, a friendly goodbye, and flew on their birds. And most of nowhere to take flashlights, jam, images, and especially the fiery water. The natives were not lazy. But as they did not work, they did not receive any tents or beautiful clothes with patterns or cans of corned beef or flask with a marvelous drink. And it was insulting and unfair.

And then they wondered why the white man falling from the sky is good, but not for them? What are they doing wrong? Perhaps for all these marvelous things to do the same as the whites. Namely – to put on headphones and screaming the words, and then lay strips, light the fires and wait. Probably, all the magic rituals and magic that captured the white man. 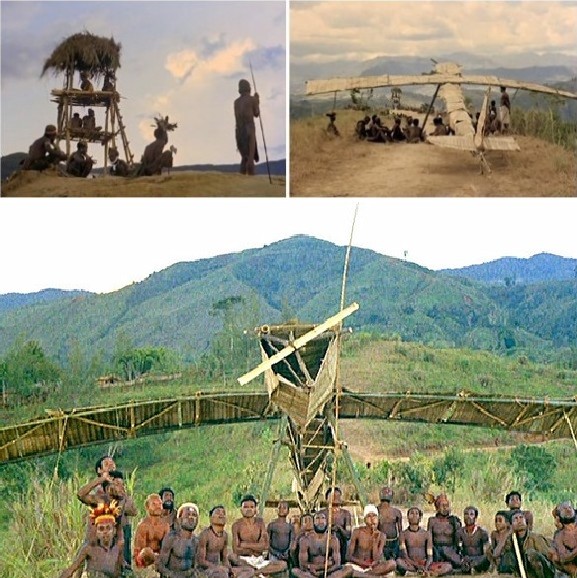 When, a few years later, reached the island anthropologists, they found that there had been absolutely unprecedented religious cult. Everywhere was stuck poles connected by a hemp rope. Some natives were laid out in the jungle clearing, built a wicker tower with antennas waving flags of painted mats, other headphones of halves of coconuts and people were shouting in the microphones.

On the cuttings were laid straw planes. Dark bodies of the natives were painted a uniform with the letters USA and orders. They diligently marched, holding a wicker rifles (pictured rifles made of sticks).

The aircraft did not arrive, but the natives believed that they probably don’t pray enough, and continued to scream in microphones, light landing lights and wait for the gods that will finally bring them a coveted cargo. There were priests who knew better than others how to March properly and fiercely denounced those who shied away from doing all the rituals. During these classes they did have was once pounded grain, dig sweet potatoes and fish.

Scientists have sounded the alarm: the tribes could die out of hunger! They began to provide humanitarian assistance that finally convinced the natives of the correctness of their views, after a wonderful cargo finally again began to fall from the sky! Right now many of the cargo cult came to naught, but some exist in our days. For example, the cult of the Messiah John Frum on Tanna island.

Something similar could have happened in ancient times, when the world’s population faced with the alien technology that was for people in the same unprecedented spectacle, as American planes for the savages of Melanesia.

Back to ancient Egypt. Historians, for example, for a long time torments a question why this pharaohs considered themselves sons of the Sun, that is, representatives of a deity, carefully whiten their swarthy faces, pasted them on false beards. And when he died, his eyes put blue stones, as if mimicking the sky blue eyes. The Egyptians, as we know, they to this day, usually brown. 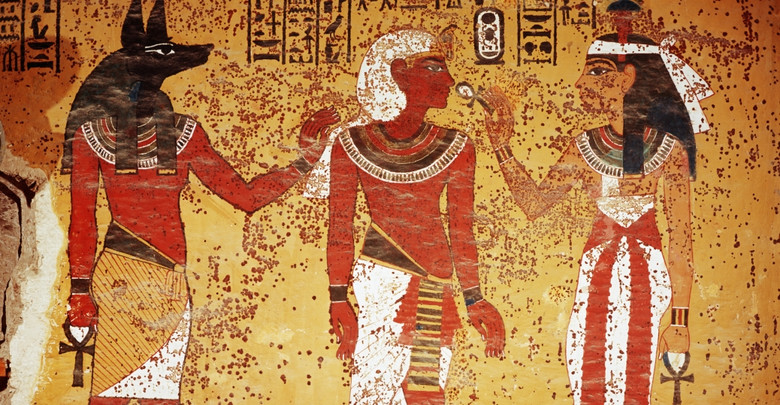 Then why after the death of the deceased Pharaoh were subjected to such a complex burial procedure? From the body of the deceased removed the internal organs, and most of it was soaked with embalming fluids and carefully bandaged? After all, in everyday life with the corpses of ordinary Egyptians haven’t been busy…

“The explanation of the above customs can be quite logical if we assume that the ancient Egyptians were imitating someone blindly copying what is seen”, — expressed his opinion of Oliver Taiver from England.

And they probably saw this. Flew him to Atlanta was a tall, fair-skinned people with blue eyes. Many of them had beards. And, as one, possessed knowledge and skills that seemed to those around them is not only surprising, but divine. For example, they could communicate with their own kind, tens, or even hundreds of kilometers, moving from place to place on some “samopisnyh” wagons and boats…

And although for us these skills seem pretty ordinary, the ancients had a different opinion on this matter — this ability probably seemed to them supernatural. Hence the desire of the pharaohs to resemble the aliens, at least outwardly. Hence, false beards, blonde wigs, bleached faces.

When somebody gets sick, what to do? That’s right, in serious cases lay on the operating table. Give anesthesia, and the surgeons begin to delve into the inner organs, sometimes even cutting off and throwing some parts… Then man tape up and sent to intensive care or intensive care, where put into a special box. And all this, of course, is not at home, and in special clinical complex.

Now imagine that something similar is happening in the eyes of the ancients. Atlanta not only operate on their sick or wounded companions, but some of them — especially difficult — perhaps even subjected to suspended animation, in the hope that the patient will be able to heal at home. Where and send it on a space ship at the first opportunity. 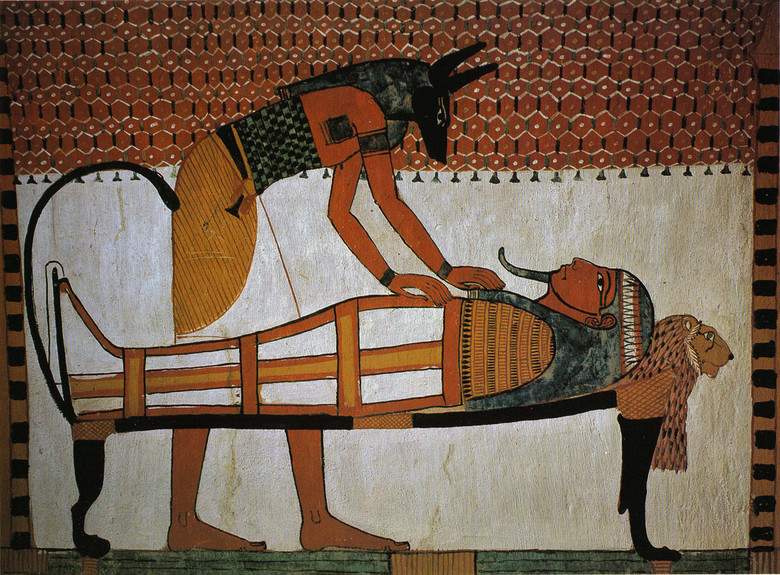 In the end, our ancestors see and take out the bodies and bandages, and placing the patient in a special capsule. And copy all this to the extent possible. What plastic capsules they have turned into a stone sarcophagus, then, sorry, the costs of the then technology. Like the pyramids, which apparently was copied from the huge ships.

One way or another, but in the end the reality of the existence of some other world, where a motionless body, does not cause the ancient no doubt. And the pharaohs, as the highest representative of earthly power, too, began to prepare for the long and dangerous journey.

Some time after the burial of the Pharaoh, for the Egyptians idea, got up from the sarcophagus and left the tomb, led by the special envoy. In the text, discovered in one of the pyramids, said: “will you Be at the door through which humans can’t go, and then the one who leads will come”…

Here begins the most amazing. Before entering heaven, Pharaoh makes a long journey through the caverns of duat, “a secret location where you can reach the Undying Stars,” says a well-known researcher of the unknown Zechariah Sitchin. In his book “Stairway to heaven” he develops this idea in the following way.

Journey through Doitu “deceased” Pharaoh gathered to fly into space, was divided into 12 stages. To list them all — so tell the rather thick book. So I will mention only some moments. Coming with a guide from the pyramid, the Pharaoh had to cross the Lake Reed to the special “boat”, and the oars and rudder which came to life at the behest of mysterious forces. 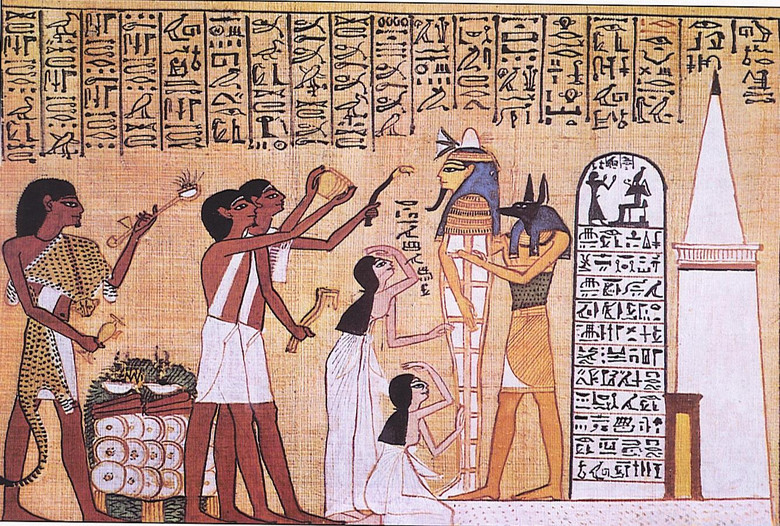 Then he passed through the gorge between the rocks and fell in a desert area about the size of 25 to 65 miles. (Isn’t this a modern spaceport?) It is no coincidence that in this place “the Celestial barque of the God RA is depicted as standing on top of a round hill or rising to the heavens in flames. Rocket and more!

However, before you get on Board of this ship on the “staircase to heaven”, the Pharaoh had to undergo special training in the dungeon where the secret passages were. Only after many tests of the astronaut candidate take the goddesses who equip it to travel “across the sky”.

Finally, he took a seat between the two gods in the so-called “Otnositel to Heaven.” (Well, just a space tourist with a buddy in the cockpit of the “Union”…)