The mysteries of the Greek island of Delos 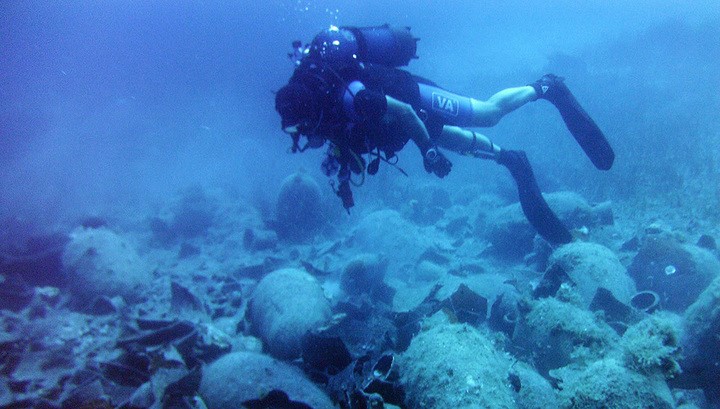 At the bottom of the tiny Strait between the Greek Islands of Delos and Rinia in the Aegean sea, archaeologists have discovered the remains of seven ancient merchant ships. Search the sunken ships near the island of Delos were targeted, however, such a “rich” result in just three weeks of research, it became a surprise even for the scientists themselves.

The study of the seabed around the island of Delos and Rini is part of the larger joint project Inspection of underwater antiquities of Greece and the National Greek research Foundation. The main goal of this project is to study the urban infrastructure of the island of Delos in the late Hellenistic era.

The island of Delos (dilos) – paradoxical. Piece of land with an area less than 4 sq km does not able to provide: fresh water is limited, everything else has to be brought from outside. The island has no permanent population – it is considered a desert, the only inhabitants of Delos – Museum workers. In our days the whole island, as a whole, has the status of a Museum under the open sky, and all the people on the Delos objects included in the list of UNESCO world heritage.

The story of Delos began in the 3rd Millennium BC, but it was made by the gods, namely Apollo (ancient Greek myths and legends of Delos recorded as the place of his birth). Between 900 and 100 BC tiny island was an important religious center, like the sanctuaries at Delphi and Olympia, the sanctuary of Apollo on Delos had Obelisque value. Every five years there was held a festival in honor of Apollo, at Delos gathered pilgrims from all the Greek territories.

The Strait between Delos and Rinia was one of the most important shipping lanes of the Aegean sea. The sacred island with convenient coves have grown large port city that for centuries served as a center of Maritime trade between the Eastern and Western Mediterranean. The construction of the Delian League port stretched for almost a kilometer along the shoreline.

The importance of Delos was not challenged by the numerous conquerors: Philip of Macedon built the Basilica, and after the conquest of the island by the Romans in 166 BC, Delos received the status of a free port. Trade contributed to its prosperity even more of the cult of Apollo. The historian Strabon has left this description of the island: “Although Delos had become so famous, but with the destruction of Corinth his fame grew even more. For merchants, the leading overseas trade, went to Delos because they were attracted to the freedom from taxes and duties, which used the sanctuary, and the convenience of the harbour. In fact, the island is ideally located for those who are sailing from Italy and Greece to Asia”.

From the records of Strabo it is known that Delos was also the largest slave-trading center. For centuries, the money flowed to Delos and Delos across the river, all this explains the density of monuments per square meter of the island. It is not surprising that the excavations on Delos are underway with the nineteenth century and is still going on.

This year scientists were able to conduct a detailed study of the seabed in the coastal zone. Scientists have also explored the North side of the Bay of Scardona and part of the coast of the island of Rinia, the neighboring Delos.

Was discovered and mapped numerous ruins of buildings at depths from 5 to 20 meters, archaeologists found the remains of the colonnade, and one of the lying under water buildings on a powerful Foundation could be part of the port facilities. This conjecture is confirmed by the remains of a merchant ship, was found just 35 metres from the walls of the building, but to confirm this hypothesis we need to conduct underwater excavations.

The collected data suggest that Delos was not a single port: a small but convenient Cove Sardana could be used as a secondary commercial harbour near the Central harbour of Delos. In this coastal area, as well as in the Strait between Delos and Rinia were found the wrecks of seven ancient merchant ships: six of them are Greek (dated to the late Hellenistic period, first century BC) and one Roman.

Curiosity scientists was that the Roman ship. It is known that in the first century BC, Delos had a tragic event, after which it never recovered. In 88 BC, during the war between Rome and Mithridates VI of Pontus, Delos was attacked – all of its residents, almost 20 thousand people were killed or sent into slavery, according to the ancient Chronicles. In 69 BC the city was sacked by pirates. Delos was never able to recover from these shocks: the island was depopulated, in the absence of its natural resources it could not exist without outside help, and with the advent of new players in the arena of Mediterranean Maritime trade of Delos has finally lost its once prestigious status.

However, they found the remains of a Roman ship near the island of Delos can change these preconceived ideas about the history of the island. Apparently, trading activity in the port of Delos continued for some time after the tragic events of the first century BC. This finding is in line with the new archaeological data obtained on land: during the recent excavations on the island were found evidence of human presence on Delos and in the Roman era, in the first century ad.

The most famous discovery raised from the seabed and marked the beginning of underwater archaeology as a separate discipline, was also taken near a tiny Greek island. We are talking about a lot of the Antikythera mechanism, the study of which is still ongoing.