The mysteries of the underground city in Yerevan 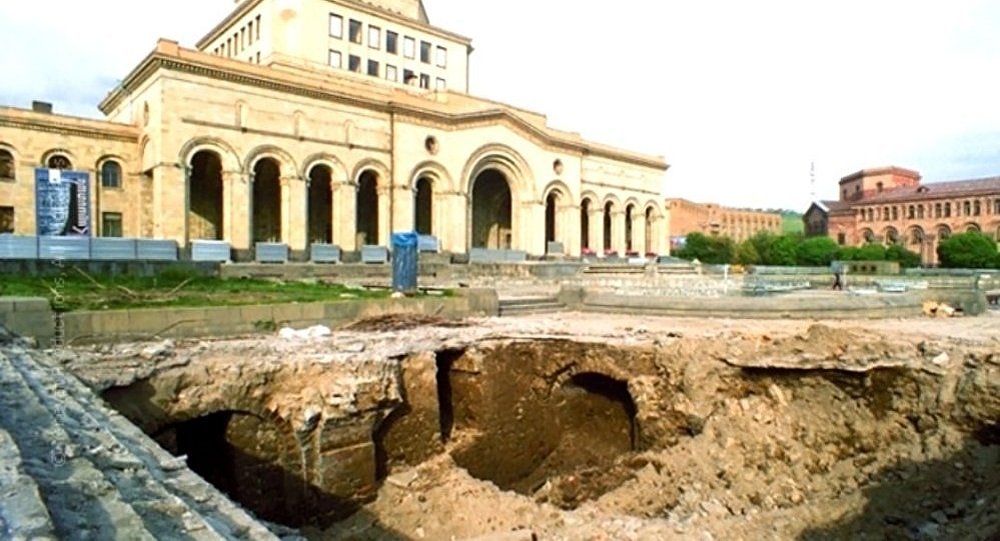 The main square of Armenia is known in the world for architecture of the buildings built of pink tuff. However very few people know that under it the whole city of the 17th century is hidden. But now it is filled in with cement and asphalted…

In 2003 during reconstruction of the area of the Republic the underground city stretching under Abovyan’s streets, Amiryana, the area and the reaching ancient area Kond was found. However the same year it was filled in with cement and asphalted.

“Under the area we found the buildings repeating architecture of the ancient Armenian state of Urartu. As a result of a research it was revealed that their top floors were destroyed because of an earthquake of the 17th century” — the archeologist, к.и.н told. Institute of archeology and ethnography NAN RA Phrynia Babayan.

According to her, the rooms about 4,5 meters high connecting with each other internal arches or doors were found. The base of buildings was so robust that after an earthquake owners of these houses continued to live in the remained floors. “I found three rooms connected with each other by arches which had a magnificent paved floor. However we were given only 12 days on excavation” — Babayan told. She noted that for so short term it was impossible to explore the area completely. But local authorities wanted to finish quicker repair work on the main square of the capital. “Then it was pleasant to nobody that there an archaeological object opens, for all it was a burden, and we in the course of work had artificially created difficulties” — Babayan told. So oddments of basements with vaulted arch overlappings in a combination of black and red tuff sank Into oblivion. “We used our best efforts. However valuable monuments to antiquity were asphalted sometime they were dug out by the subsequent generations” — the archeologist noted.

According to her, declared to them that excavation can continue only if they find the sponsor.

Also the plan of construction of an entrance to the city hidden underground offered by archeologists was rejected. The new wave of discontent rose after the building the MFA located on the square was sold. The new owner intended to destroy underground structures to build there the parking for cars. It was succeeded to prevent destruction of monuments of history by means of protests of local population. “When we brought up a question that it is impossible to build the parking there, they began to offend us. By the way, it was impossible to build nearby with each other as well on Severny Avenue because of seismic activity of this zone houses” — she reported. Babayan emphasized that she was already tired to repeat same, constantly coming across misunderstanding walls. Also locals who celebrate the day of the 2798 anniversary of Yerevan without the Aged city where were expensive with a stone laying, tram lines and magnificent gardens, and also the ancient houses representing great architectural value were tired of heartless structures.