The mystery genius of the infant of lübeck 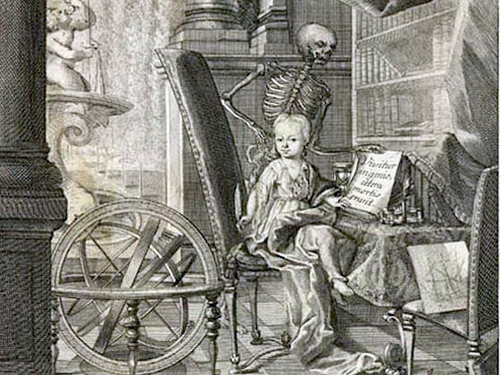 In all ages there were children, able to surprise his contemporaries with his unique talents. However, the most striking of the so-called infant of lübeck.

A boy named Christian Friedrich Heineken was born in a small town in the North of Germany on 6 February, 1721, and lived a little more than four years but went down in history as the most brilliant child ever born on earth. According to legend, he met the king and was fluent in several languages.

If Christian had to pass an IQ test, then the result probably would have exceeded 200. However, he was not autistic. Like a sponge, boy absorbed knowledge from various fields, not limited to one subject.

It has not been closed and is communicated with the men by hitting them their inferences and harmony of speech. To ten months (according to others – two or three months) the baby didn’t like Gurukul peers, and was built articulate sentences. He repeated them after his parents – an artist and architect Paul Heineken and owner of the shop of art products and alchemist Katarina Elizabeth.

Helped the child to understand the world his nanny, Sophie Hildebrant, which contemporaries called “soldier in a skirt” for feldfebel manners. Sophie abruptly snatched the baby from the cradle, is brought to the paintings, placed on the house, and kept saying, “This is a horse a pet. It is a tower with lights, called the lighthouse. This ship, which is floating on the sea. Now I’m going to point the finger, and you can tell me what this is…”

Surprisingly, but without hesitation he blurts out just heard. When primitive knowledge of the babysitter was exhausted from Silesia wrote a governess Madame Adelsman. She had, as he said Heineken senior, and Polish this precious stone.”

After two or three months, when a child clearly says only “Mama” and “Papa”, Christian Friedrich knew the main events of the first five books of the Bible. For two years he was able not only to reproduce the facts of biblical history, but quoted the whole portions of Scripture in which they were mentioned.

A year later, the boy added to his knowledge of world history and geography, combining it with the study of Latin and French, mathematics and biology. In the fourth year he began to study Church history and religion.

It seemed that the kid knew everything. His fame spread with incredible speed. Therefore, the students of the lübeck gymnasium was not too surprised when the boy took a seat on the pulpit to give a lecture.

Among the audience was Johann Heinrich von Seelen, rector of the gymnasium of lübeck. He remembered the day on 2 January 1724, when he had a chance to dive into the “encyclopedic carousel”, which was hyped to the audience the Prodigy.

The boy began with the analysis of biographies of Roman and German emperors from Caesar and Augustus to Constantine, Ptolemy and Charlemagne. Then gradually switched to the Israeli kings, from them to the geography of Germany.

Finished with a story about the structure of the human skeleton, pre-depicting bones. All this was linked to strict logical chain, although the facts were from different eras and spheres of knowledge.

“The audience sat as if spellbound, all of them opened their mouths, – wrote in his diary background Seelen. – But the kid suddenly fell silent, hearing the battle of the bells: “And now excuse me, gentlemen, I have to go to the nurse!”

“It seems that he wears in his head a whole world with superstitious fear scientists say, the commoners, the Church authorities. – A bit too easily given him the knowledge!”.

After reading hundreds of books, brilliant little one loved only one book, a richly illustrated folio is Latin for “the World of sensual things in pictures” humanist and father of pedagogy, John Amos Comenius. It was a kind of encyclopedia of the time.

Figures of literature and art like race rushed to immortalize the glory of the infant of lübeck during his lifetime. A composer from Hamburg, Georg Philipp Telemann dedicated to him several works, and literary.

He arrived in Lubeck to get acquainted with the Prodigy, and then said, “Indeed, if I were a pagan, I would have knelt down and bowed my head in front of this child!” Telemann is the author of poetic dedication, which was subsequently placed under the portrait of the baby, written by his mother: “a Child who before were born, you were the one and then our world will suffer hardly, you are the eternal treasure of ours.

The world believes your knowledge, partly comprehending their little. And we’re not yet attained, we ourselves do not understand your secret.” Even Immanuel Kant was involved in the process of canonization, calling young talent “child Prodigy early crazy eremeichenkova existence.”

A brilliant child could singsong to read all of the Psalms, to explain the features of all known varieties of Moselle wine and to reproduce the genealogical tree of the most prominent families of Europe. But keep the pen for a few hours a day was for the baby monstrous load.

“Madam,” he said once to her mother, “I want to go to Denmark to convey the good king Frederick detailed marine charts which I can draw his own”. The mother also said that his strength is not enough to hold a pen in his hand. The boy reassured her, saying that “the Lord is merciful, he will give me strength to draw maps and to cross the sea. It’s your authorization.”

I must say that Christian parents have sought to ensure that the little genius recognized throughout the world. So they arranged meetings with anyone who was interested in the boy, ignoring the fact that these meetings were being whipped Prodigy.

When hearing of the miracle came to king Frederick IV of Denmark, he expressed the desire to meet the miracle child. Friedrich was a man of distrustful and did not believe when he was told that the baby three years, is fluent in four languages, while the king was little known native Danish language and hardly painted. Child it was decided to bring to Copenhagen.

The boy read before the king and court a few lectures on history, and with references to authoritative sources, and was immediately awarded the nickname Mirakulum (Latin for “miracle”).

The only thing the kid refused to dine with the king. How courteous he explained that he ate nothing but porridge and dishes of grain and flour.

The king was astonished. But he whispered: feeding the baby entrusted to the “soldier in a skirt”. Nurse from birth was explaining to the kid that as a true Christian he can’t eat animal products. The compulsion was to strong that the boy just could not stay at the family table, when home set before them fish or meat dishes.

In fact, monotonous diet it and ruined it. Kid for no apparent reason fell on the bed and groaned from the pain in the muscles, refusing to eat. He suffered from insomnia and lack of appetite. Besides, hard to bear any smells and sounds, demanding that he constantly washed his hands and didn’t bother requests and visits.

Experts say these are typical symptoms of celiac disease – disease caused by damage to the villi of the small intestine, some foods contain certain proteins – gluten (gluten).

By the way, in Copenhagen court doctors, not knowing about such diseases as celiac disease, tried to feed the baby a little differently than the prescribed “soldier in a skirt”. Gave him a light soup, beer and sugar.

They told his mother about their suspicions: cause of health disorders in the imbalance of power and the blame for everything solely on Sophie. But mom, “not to upset Sophie, that kid dearly and sincerely loved, re-translated it into porridge.

Journey to the Danish king and back took several months. Only 11 Oct 1724 the kid along with the relatives arrived home. Started the period as noted by the lübeck doctors, progressive weakness of the body, intense joint and head pain, insomnia and lack of appetite. 16 Jun 1725 Christian health deteriorated sharply, his face covered with swelling.

Followed a severe attack of allergies: digestive system rebelled against anything that contains flour. One day, when the feet of the boy was treated with herbs, he said: “Our life is like smoke”. After that, he sang some of the 200 known Church songs, weaving his voice in the chorus of those who sat near his cot and read prayers.

The kid died 27 June 1725, saying: “Oh Jesus, take my spirit…” His older brother Carl Henry Heineken, who later became a famous art critic and collector, said his whole life chasing that kid at the age of four met death with the calmness of a philosopher. Two weeks coffin with Christian Heineken, whose brow was adorned with a Laurel wreath, was standing open.

In lübeck to bid farewell to the young genius had been the most famous person of the North of Europe, and just curious, wanting one last look at lying in the coffin, the miracle baby. The parents carefully recorded the names of all the influential persons, who came to the Church.

Probably, every child Prodigy, there is something of Christian Science. With the Akrit Yasalam it is in common knowledge of anatomy, since in seven years, the Indian boy made the first surgical operation.

John Stuart mill, the famous philosopher and economist of the XIX century, could read Greek at three years. Wolfgang Amadeus Mozart began at the age of four virtuoso pianist. William James SIDIS literate in a year and a half and wrote to eight years four books.

Perhaps Christian would be the youngest academician of the time, not listen to it nurse. Maybe it would have suffered the fate of the young poet Nicky Turbine, with four years dictated to mom poems.

Growing up, nick ceased to be “little Russian miracle” and her life became like a nightmare: alcohol, drugs, suicide attempts and tragic death.

If the child from the cradle understands that differs from others is inevitably distanced him from society. In addition, often this uniqueness is emphasized by parents. In many cases, the prodigies were literally tortured to death (and in the case of Christian – visits) and not knowing the joys of childhood.

So there is a psychological impasse, out of which maybe not every young talent. Sounds sacrilegious, but may not be investigated at that time celiac disease has saved the baby from Lubeck from the cruel frustration that would have brought him international fame is inevitable.

According to the American psychologist the Years, Stetter Hollingworth, child geniuses are often just not emotionally ready to tackle serious philosophical and ethical issues, and it leads to tragedies – from the madness to an early death.

Could the “infant of Lubeck,” to live a long and happy life? And who is to blame for his early death: the vain parents, the nurse and her views on diet, nature, giving Christian an excessive thirst for knowledge, which simply could not master the child’s body?

If he was born in our time, the tragedy probably could have been avoided, but history, as we know, does not tolerate the subjunctive mood. It is known only one thing: achievements Christian hasn’t surpassed no child.