The mystery of bodies from swamps. Who brutally killed ancient people? 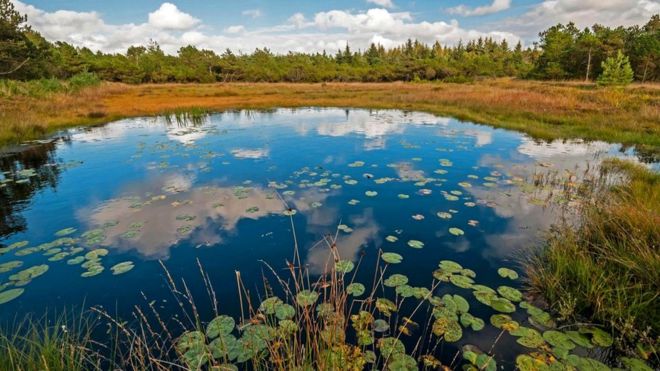 We can guess only why these ancient people whose perfectly remained bodies find in swamps across all Northern Europe, have been so brutally killed.

Our train going from Hamburg to Denmark slowly passed the green fields and birchwoods which are filled in with water, and the next swamp shaded by willows and overgrown with blue-green seaweed and a duckweed outside the window seemed.

Even sitting in the car, I felt what they are dark and quiet, these peace bogs – here also, is thought to me, the reservoir nearby from here had to look, in Helsingyore where the unfortunate beloved of Hamlet Ophelia has found the last shelter.
The train has driven in a kingdom of marsh people.

Marsh people call our ancestors living two thousand years ago. Their bodies find in bogs across all Northern Europe – from Ireland to Poland.

Many modern archeologists believe that these people living in the Iron Age have been killed and carefully lowered to the swamp as a ritual sacrifice to gods.
Some scientists claim that it were criminals, strangers or tramps.

Denmark is high on the list in the world by the number of swamps and marsh people, many of which have perfectly remained within long centuries as if preserved in the acids emitted by a peat moss (sphagnum) – live “base” of these bogs.

The majority of bodies is found incidentally at extraction of peat in 1800-1960 when it was still used in Denmark as fuel. 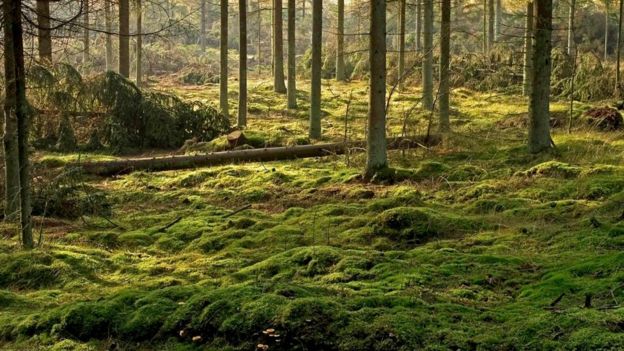 The openings which are carried out by means of the last achievements of forensic medicine have shown that almost all of them – both men, and women – have died violent death: at some on a neck thinly dressed loops have been tightened, at some the cut throat terribly gaped.

As is known of Denmark of times of the Iron Age very little – during this period there was no writing, and from the Roman and Greek sources up to now almost nothing has reached, – we can only guess about the one whom they were and why they were killed.
However, as in most cases bodies of the dead burned in those days, we know that these unfortunate were comprehended by other end, than their contemporaries.

I wanted to look with own eyes at marsh people to try to understand the mysterious world from which they come.

The small town Vail in the southeast of Jutland, in 240 kilometers to the West from Copenhagen became the first stop on my way. Inhabits Vail about 100 thousand people.

This magnificent hilly area is atypical for flat Denmark: roads wind on soft slopes of the cultivated hills and on the valleys of a glacial origin speckled by the hollows and forest bogs surrounded with pink orchids and a rigid brown rogoz filled with water. 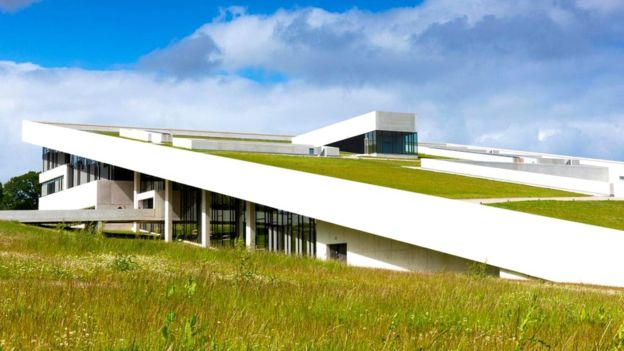 I have come here to get acquainted with Mas Raun, the chief archeologist of the Museum Vail and the keeper of a surprising meeting of exhibits among which there are both Roman coins, and swords with the engraved inscriptions, and brooches with a swastika (actually, this ancient symbol existed still before it was adopted by fascists). All this has been found in swamps.

From the dark room in the depth of the museum droning of a cervine horn was heard – now in him my contemporary blew, but in Denmark this sound often served as a distress signal in the Iron Age. I have listened to his appeal and have hurried inside.
In the dark in an open glass sarcophagus the brittle, fitted by thin skin woman’s body from Haraldsker on which ash-gray face expression of a deep shock has stiffened lay.

She didn’t look such pacified as those marsh people whom I saw in books, and from it on skin goosebumps ran – it seemed as if I interfere in something personal.

“In 1835 when she was found by getters of peat, she was taken for the queen of Vikings Gunkhilda living in the X century whom if to trust “The saga about the yomsvikingakh”, the husband Harald Sinesuby has drowned her”, – Ravn has told me, scratching a beard and with curiosity glancing at a body.
“But it not so, and now thanks to the radio-carbon analysis we know that she is about 2 200 years old”. 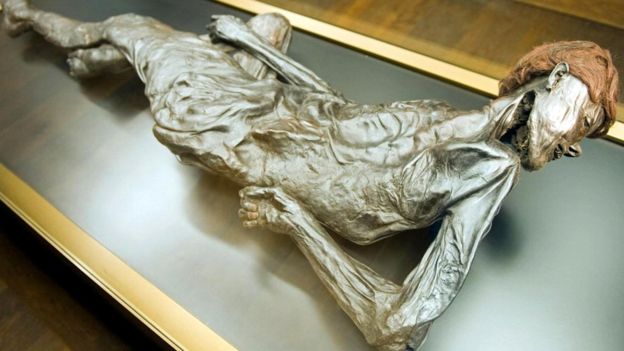 The person from Groboll – nowadays main place of interest of the Museum Moesgord – was killed, having cut a throat

The woman from Haraldsker was found bared at the bottom of the swamp to which she was pressed down by branches of trees – possibly, after the death.

Her clothes lay near a body. Judging by traces on a neck, the woman was strangled.

During additional pathoanatomical examination stomach contents at the time of approach of death were investigated: in it there were a crude millet and blackberry – the atypical menu of the last meal for society in which ate mainly meat.
“Now we carry out the isotope analysis of her hair and we apply the new method of research DNA based on extraction of a DNA sample from an inner ear. We hope to receive soon results and to learn about it more”.

We with Raun were driven to Haraldsker (Haraldova of the swamp) where the woman was found.

Not remarkable place is located in 10 kilometers to the West from the museum. As well as those swamps which I saw from a train window it was covered with a bright green duckweed and surrounded with a dense ring of trees under which in spots of a sunlight the crooked mushrooms with claret hats and bright-red berries dazzled.

In these swamps there is something magical and otherworldly – here it becomes clear why very long time ago they were chosen for bringing of the victims and why they save the inexplicable attractiveness to this day. 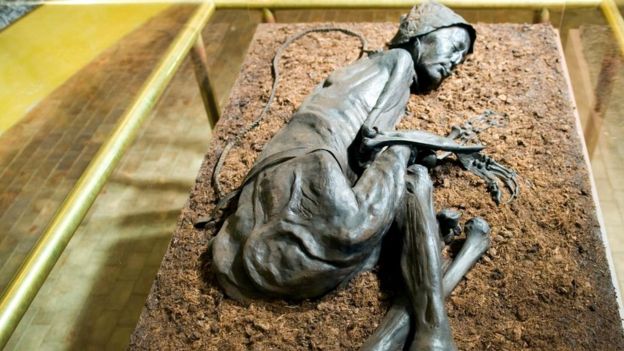 Further on my way Aarhus – the second-large city in Denmark lay. I came to look at the surprising exhibits exposed in the new Museum Moesgord where there is one of the best expositions devoted to the Iron Age in Europe.

Main “star” of an exhibition – the person from Groboll. It was found in 1952 sitting in a natural relaxed pose as if practiced yoga, and perfectly remained: a foot and skin remained almost untouched, and his face with sharp lines and a button nose looks almost as well as during lifetime.

“As at most of marsh dead persons, hair and skin at it were painted in red color as a result of the chemical process called by Mayar’s reaction, – the archeologist and the head of exhibition department Paulína Asingkh explained. – Male handsome!”.

However, the serene look of the person from Groboll doesn’t match his terrible death in any way.

“It was forced to the knees and, standing behind, cut to it a throat from an ear to an ear. Then very accurately lowered to the swamp”, – continued the story Asingkh.

“It can seem to us cruel and reckless, but in those days sacrifices constituted an important part of cultural life of people”. 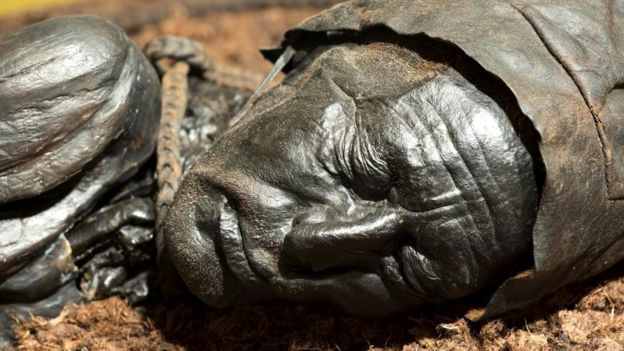 Then Asingkh has spent me to other exposition this time devoted to the killed on swamps to dogs.

In 2015 13 dogs sacrificed approximately in 250 our era have been found in the Skyodstrupsky swamp near Aarhus – means, ritual sacrifices were not only human.

Moreover, within this exposition several touching series of the drawings showing that behind these sometimes deep attachment stood brutal murders are exposed.
On one of them the young girl decorating with a wreath from flowers a neck of the dog before an execution is represented.

Visit of the Museum Moesgord has set me thinking: as if we wanted to approach simplistic the past, our ancestors were people, but not artifacts, and everyone had the difficult life story.

The small town of Silkeborg in 44 kilometers to the West from Aarhus became the last stop on my way.

Here, in the light yellow building of the Silkeborgsky museum, the small, but impressive collection of the exhibits devoted to marsh people is exposed and there is one of the most well remained samples.

The person from Tollund whose age contains about 2 400 years has reached our days in an integrity and safety – so that in the 1950th years when his body has been found, local authorities have taken him for a corpse of recently missing boy.

As well as some of his companions in misfortune, this marsh person has been hung up – smartly weaved loop still flaunted at him on a neck. But also the long nose, and his smooth forehead haven’t been touched by decay, and full lips have developed in a mysterious half-smile.

In the following room I was waited by the woman from the Shed found in only forty meters from the person from Tollund and who has died approximately at the same time.

Apparently, she has also been hung up. Her beautiful red spit of 90 centimeters is laid in difficult knot.

The museum archeologist Ole Nilsson has brought me to Byellskoudal where both bodies have been found, – it the wide swamp is located approximately in 15 kilometers from the museum.

Since then this place has been recognized as the natural reserve, equipped with wooden floorings and supplied with a marking of tracks.

During our bystry walk over the swamp, similar to the lake, the gaze hung, and on the way to us big blue herons, kryakva, violet flowers continually met, and, of course, everywhere there was a porous moss a sphagnum.

Having stopped to admire the swamp, I have thought of what else secrets are kept by its dark depths.

The swamp squelched – slowly and greedy as if reminding of the eternal and terrible power that it got in the millennia to his bog.