The mystery of the ancient city in the Kalahari Desert 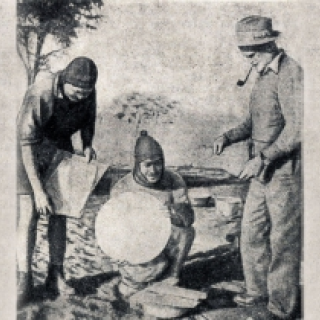 For more than a hundred years the mysterious story of a mysterious city, lost in the center of the most arid desert of the African continent – the Kalahari, excites the scientific community, adventurers and treasure hunters.

On November 7, 1885, a report on his discovery to the members of the Berlin Geographical Society was made by Jelarmi Farini. On March 8, 1886, he repeated the same report before the Royal Geographical Society of Great Britain. In the same year in London, Farini published his book “Through the Kalahari Desert”, in which, in particular, he described the find of the lost city. At the first stage, all these messages aroused genuine interest.

The identity of the pioneer himself was also legendary. Canadian William Leonard Hunt worked as a salesman in a shop and was going to marry the owner’s daughter. Once with the bride he visited the presentation of the Great Blond (circus name), who walked along the rope above the Niagara Falls. The sight so shocked him that he decided to repeat these tricks.

However, these plans were not liked by William’s future relatives. Hunt lost his job and the bride. But the world has found a great rope-walker Farini – Hunt chose such a pseudonym for performances. For a long time he tried to surpass the deeds of the Great Blond, to eclipse his frenzied fame. One day, for example, the Blonde roasted an omelet on a tile brought in with a rope hanging over the Niagara Falls. Then Farini dropped a bucket on the rope, scooped up Niagara water and washed a dozen handkerchiefs in the same place. Slava Farini has thundered all over the world. Later he began to work as an impresario and organized various amazing spectacles, both in America and in Europe.

One day, organizing a show where the “exhibits” were living Africans, Farini met Geert Kurt Lowe. Lov was born from a Bushman and white in South Africa. His stories about the immense wealth of these lands, especially diamonds, so deeply inflamed Farini’s imagination that he decided to travel to this remote part of the world.

Farini, his son Lulu and the accompanying Lov on the steamer Roslin Castle arrived in Cape Town in early January 1885. By rail they managed to get to the station of Houptaun, located on the border of Kalahari. Their further journey took place in a van, first harnessed by mules, and later by oxen and buffaloes. Accompanied by hired half-hunter hunters, and having in his hands the homemade Kalahari map acquired from a German engineer, Farini went deep into the desert. During the trip he hunted and collected a collection of local insects.

Finally, the travelers made the main discovery of their expedition. “We camped at the foot of the mountain – near a rocky ridge, which looked like a Chinese wall after an earthquake – it was the ruins of a huge structure, sometimes sanded in. We carefully inspected the ruins almost a mile long, they were a pile of huge hewn stones, and Here and there, the traces of cement were clearly visible between them … In general, the wall had the shape of a semicircle, inside of which, approximately forty feet apart, were piles of masonry in the shape of an oval or a blunt ellly The height of a foot and a half … As all of them were to some extent sanded, we ordered all our people to dig out the largest of them (and this work clearly did not suit them) and found that the sand had protected the junction from destruction. Excavations took almost the whole day, which caused a lot of indignation in Jan. He could not understand why it was necessary to dig out the old stones, for him this activity seemed a waste of time … We began to dig up sand in the middle of the semicircle and discovered the footwall of the twentieth wide, lined with large stones. The top layer was composed of oblong stones placed at right angles to the bottom layer. This bridge was crossed by another one, forming as it were a Maltese cross. Apparently, in the center of it was once some altar, a column or a monument, as evidenced by the preserved foundation – dilapidated masonry. My son tried to find some hieroglyphics or inscriptions, but did not find anything. Then he took a few photographs and sketches. Let the people who know better than me judge them by when and by whom this city was built. ” 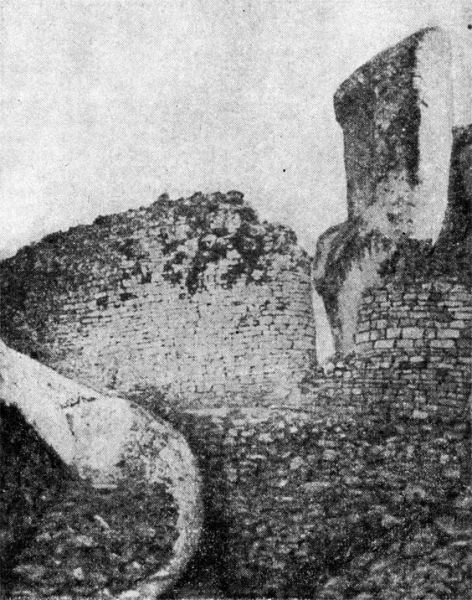 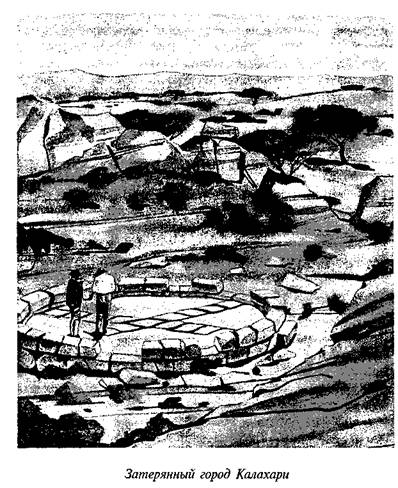 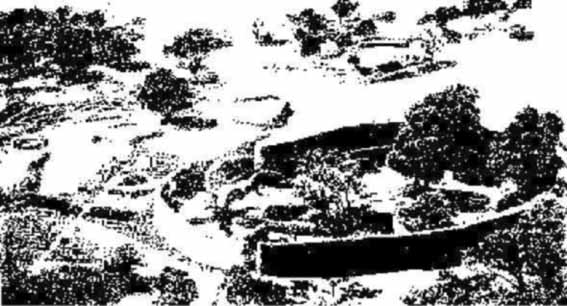 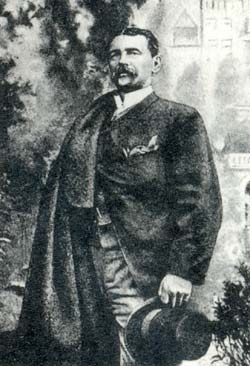 This description, taken from Farini’s book “Through the Kalahari Desert,” is the only message about the mysterious city of Kalahari, nobody saw him again. In the time that has passed since the publication of Farini about the existence of a lost city in the center of the desert, at least twenty five expeditions were organized to search for him. Despite the use of cars and aviation, no traces of the mysterious monument of the centuries were found.

Soon different versions appeared explaining these failures. The first and the simplest was that this mysterious city of Farini was simply invented, in order to revive the shaken interest in himself. This version does not withstand any criticism. The book is written and without that interesting. The history of the discovered city is not central to it, but only one of the episodes. Under these conditions, his son had no sense in making sketches of nonexistent debris and falsifying their photographs.

Professor A. J. Clement in 1964, put forward a different, more scientific version. In his opinion, for the ruins of the city Farini took a scree of stones of natural origin. And indeed, a mineral dolorite has the property of being destroyed under the influence of the forces of nature so that it gives the impression of being processed by man. But this version does not explain the presence of cement, which is quite specifically written by Farini. In addition, no expedition was able to detect a scree of dolorite, reminiscent of the described city.

Apparently, the mysterious city of Farini is covered with sand dunes, and the search for it must continue. A participant of one of the expeditions, a real enthusiast, Dr. Peivert wrote about this: “It’s all very vague. When you see this desert, you will understand that you can wander among the sand dunes for months and not even come close to the places where the lost city is located. “