The mystery of the bracelet Denisovsky person 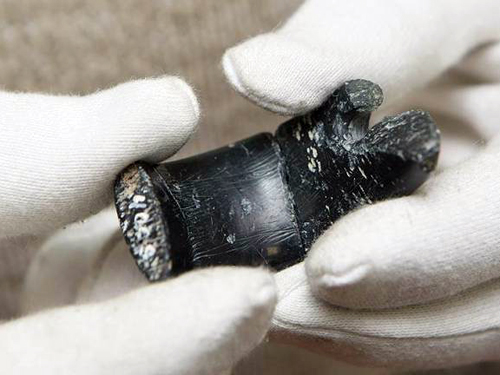 Almost every year archaeologists get from oblivion the items that change our understanding of the ancestors. For example, jewelry from the caves of the stone age. It would seem that the caveman and jewelry don’t mix. But there is an artifact found in a cave in the Altai mountains, causes us to question the primitiveness of the ancients.

In 2008, an international team of archaeologists have discovered in Denisova cave in the Altai small bone fragment. The first rule of the archaeologist reads: in any case not shy away from any debris.

But who would have thought that here was found ten grams of the bone can alter science, then thoroughly shake it!

But about all under the order. A wide belt of steppe, situated between Ural mountains and the Caspian, called by scientists “the gate of the peoples”. Location of the Altai mountains also is such that to circumvent their ancient migrants from Europe to Asia (and Vice versa) was extremely difficult. It is not surprising that there were traces of many immigrants. Including the one that had the modern man with the smallest similarity.

Altai most guests preferred to live in the local caves. The famous Denisova cave – on the southern Altai dialect Ayu-Tash, which means “Bear’s stone”, is one of them. (By the way, there are two versions regarding the Russian name of the cave.

The first is that at the end of the XVIII century settled into the cave Holy man – believer Dionysius, who led a solitary life. According to another, near the cave were the lands of Denis shepherd who had taken shelter here during bad weather.)

It is a famous natural and archaeological monument but also an important tourist object. Located in’skiy district of the Altai territory.

In it 300 thousand years ago took refuge from the weather and predators of the genus Homo, from Neanderthals and ending already significantly developed nomadic peoples – the Turks and the Huns.

The reason for this popularity of Denisova cave – her cave. Here is always dry, and the hole in the ceiling allows natural sunlight to penetrate the light and “running” again, a natural chimney.

However, a refuge from the cold this cave is believed not all of her inhabitants. The most ancient, on the contrary, preferred to keep her in the cool of the produced carcasses – in fact until about twenty thousand years ago in southern Siberia was quite hot.

Given that Denisova cave people thousands of years led an active lifestyle – butchered prey, lit bonfires, have children, have made rituals and even buried the dead – ground in it held a mass of scientific material.

But only in 1977 the Soviet archaeologist Nikolai Ovodov made here two of the first test pit, which gave hope for the continuation of the excavation.

To them began only in 1982, removing layer after the layer. In 2008, archaeologists got to the eleventh layer, “responsible” for the people who lived here 30-50 thousand years ago.

In it, among other things, they found a small bone, representing the last phalanx of the little finger of the hand. While still in the cave, when the accessory bones of the man became clear, archeologists rejoiced: for thousands of years usually bones turn to dust. But then it was even more interesting.

Phalanx of the finger was sent for a genetic study in the Leipzig Institute of evolutionary anthropology max Planck. There is a group of scientists under the leadership of biologist Svante Svante, “read” earlier, the Neanderthal genome, determined: the bone does not belong to homo sapiens and even homo neanderthalensis, and the different branches of apes. It was called Denisovsky person.

And it was a scientific sensation! Yes, and what else could be the detection of previously unknown to science “species” of the genus homo?

More recent genetic studies have shown that Denisovsky person did not have such a developed brain and nervous system, as a “reasonable man”. In other words, the isolated DNA has prompted the idea that denisovans could not even speak, and there were primitive humanoids.

However, the findings, unearthed after the phalanx, not really tally with this statement. To be exact – stubbornly denied it.

Bone needles with delicate ears and the same bone cases thereto, of the suspension of the phalanges and teeth of animals, beads, bones, rings of ivory, as well as the many stone pointed tips – here is what was found in the same layer as the phalanx of a finger.

It was hard to imagine that these things could make blunt (if you believe the calculations of geneticists) denisovans. But most scientists struck chlorotrityl bracelet, found in the same eleventh layer of the cave. (Chloritoid is a rare mineral of a dark green color).

The pieces of the bracelet archaeologists have discovered in the East gallery of Denisova cave. At first it was unclear what it is all about: two chip, the width of which was 2.7 cm and a thickness of a little less than a centimeter. When put together, became clearer. Though I was confused by the estimated diameter of the product – only about 7 inches.

When scientists understood that before them the bracelet, then ashamed to think that he was in this layer by artificial means. Well, for example, some of the Hun warrior buried it like treasure.

Believe that Denisovsky person could make a piece of jewelry, was not easy. After all, such things are not accidentally obtained. Yes, and the bracelet is the product of a certain culture, the result of life experience and attitudes of several generations.

No less surprised by the products material. Chloritoid is very fragile mineral. And the conditions of life of his master did not expect a quiet life. As a consequence, the bracelet was subjected to mechanical stress and damage.

On its outer side there are traces of scratches and bumps. It is not surprising that he broke at least twice.

The first time fault surface was smooth enough to try to glue the pieces together. To do this, they first sanded with abrasive, then navalawala edge, and after the bonding took an unknown soft material.

However, bonding is not regained its former strength, and the bracelet broke again, after that his recovery was impossible.

In other words, Denisovsky man could not only produce such gizmos, but also knew how to handle them, and how to fix it. And he did it very skillfully.

Inspection of the bracelet showed that there were neat holes, through one of which, apparently, was pulling the pendant with the bead. Archaeologists suggest that it could be a leather strap.

It is for the location on the bracelet segment, polished by the friction of the strap, was able to identify “top” and “bottom” of the product and understand that she wore it on her right hand.

In its original form this decoration could well appeal to women of the XXI century. What can we say about Denisovskaya the ladies in the skins? Although it is unlikely that it was worn by a woman.

In such societies, its role was usually low, and the bracelet is such high quality and beauty which is already there, you have to admit it) could belong to only individuals with a high social status.

The small diameter of the bracelet has prompted the scientists that it was not solid, and split. Worn on the wrist, he sat tight on it. In addition to the high for that time manufacturing techniques, the bracelet had another quality – he could change color.

In sunlight, it effectively reflects the rays in the glow of the fire glowed a deep dark green color. It is unlikely that he was the subject of daily use. It is more likely that it could be worn for some extraordinary occasions.

Scientists have found that the ancient master had a high enough skill in working stone, previously uncharacteristic for the Paleolithic era. This can be seen in such features of its production, as high-speed drilling machine, boring tool type rasp, grinding and polishing using leather and skins of various degrees of tanning.

Making from local raw materials, the tools that the ancient master could use, scientists with great difficulty was able to repeat his operation, and even then not completely. Because they it was difficult to believe that they face the subject from the era, separated from us by about 40-50 thousand years ago.

Previously it was thought that such techniques of making jewelry appeared only 10 thousand years ago.

No less interesting is the fact that the near field of haritalika is located two hundred kilometers from the cave. Given that in those days it is unlikely there were trade caravans, the master (or his customer) to mine a mineral had to overcome significant pedestrian distance.

It turns out that the generally accepted theory that cavemen engaged in the production of objects necessary to survival, is not very suitable in this episode.

Either Denisovskoe man was not so primitive and cave. After all, the possession of such artifacts is often associated with developed religious and spiritual culture, the ability to understand beauty.

And in the Parking lot of the denisovans (or rather, in their time the reservoir) was found a rich collection of all kinds of jewelry.

In the end, the find was handed over to study a group of researchers from the University of Oxford. They worked with her for seven years, and only in may 2015, the group issued a sensational result.

After many examinations, the British called the exact age of the bracelet – at least 40 thousand years! I want to shout: “Oh, wow!” This has made this ornament the most ancient ever found.

Moreover, it completely destroyed the idea that denisovans were primitive, morally and emotionally underdeveloped and not able to think abstractly beings.

It is possible that science will offer us more than one surprise in the field of human origins, and artifacts, like this bracelet, will contribute to restoration of historical truth.

The finding of this bracelet is brought to life with serious disputes. Many even began to argue that we have another fake, “penned by journalist”. The basis for such opinion of many is the inability to immediately find what chloritoid.

On the first pages of search engines, the word “chloritoid”, “chlortalidone” is in context with information about Denisova cave. But it is necessary to dig a little longer and look at the less visited pages as it becomes clear that chloritoid – not fiction “journalist”, but a real mineral. 65% of it consists of chlorite, the chlorite occurs as relics included in the mass of chalcedony.

Other skeptics argue that the age of minerals to pinpoint the radiocarbon method is unrealistic. But there is another method of determining the age of objects from stone age layers in which they are discovered.

This age is determined with an accuracy of a few hundred years before the Millennium quite accurately on the basis of the analysis of the items subject to radiocarbon analysis. So even though this bracelet is not 40 thousand years, and 39 is “the weather does.

However, there is another version made by the fans of extraterrestrial intelligence. Fans of this version of the claim that the bracelet is not made Denisovsky man and some aliens visiting the Earth in that era.

Or left to us in inheritance from the more ancient and developed civilizations, which have long sunk into Oblivion.