The mystery of the Buddha head in roots of Bodhi tree 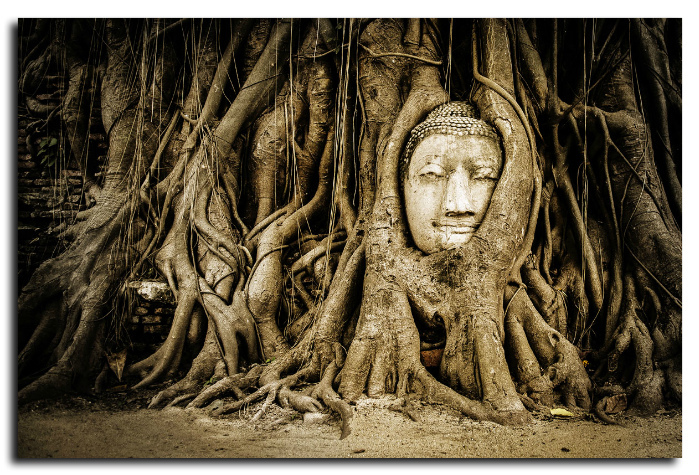 In Thailand the city of Ayutthaya, on the grounds of Wat Mahathat grows an unusual tree, among its roots is seen in the Buddha’s head. Once the Wat Mahathat was a Royal monastery, which occupies a huge area, and it was the main residence of the Buddhists. In 1767, when the city was destroyed by the Burmese, this temple, like many others, was burned and is still in ruins.

Ayutthaya (Futia) – the former capital of Siam, is today hardly probable not the most impressive ruins in Asia – located in a wide fertile valley Choprai in the bend. Chao Phraya and two rivers set the natural boundaries of the city. They are connected by a channel, so that the city lies on an artificially created island.

The main temples can be explored on foot, but hire a bike, you will see a lot more. The largest temple in Ayutthaya was Wat Phra si Sanphet, he was part of the Palace complex. A Church was built in the XIV century. It has three stupas.

Some temples were built in the Khmer style, many, though in ruins, still majestic. There are a lot of Buddha images, including the image in the temple Wat PHA Measure of Sri Lanka – say, the statue of 1300 years. Unfortunately, many of the figures were damaged by the Burmese invaders, moreover, most recently, the thieves treasure stole a few heads of the statues. However, for Thais it is a sacred place, where they clothe the figures of Buddha in yellow robes, scatter flower petals and burn incense.

The history of the city

Ayutthaya was the capital of the Kingdom of Siam 1350-1767. Guests from the West have enthusiastically described her as “the fairest of cities that ever was seen”. In the XI century by the Khmer to the North-East of the current station next to the watom Khodi Dow founded a small city is the Outpost of the Empire.

In the thirteenth century lay in the valley of Chopra the country has captured and mastered the Thai people, Ayutthaya and Lopburi became part of the Principality in a contemporary building, the vassal of Sukkot Haya. After the terrible plague of 1347, which reduced the population by more than half, the Prince was forced to leave the city in a contemporary building. His new capital, he did washed by rivers of Ayutthaya, the bulk of which was situated in a defensible location South of Chopra.

Once again, the Kingdom of Siam was divided into several principalities after the death of Rama Ramkhamhaeng, that was the reason for the beauty salon to throw off the vassalage of Sukhothai. In 1350 the Prince declared its possession of an independent state and himself its king under the name Somdet Phra Rama, Thibodi I (sometimes called king beauty salon). The new state was named after its capital city – Ayutthaya. Frame Thibodi I declared himself the reincarnation of the God Vishnu, and a surviving hero of the Indian epic “Ramayana”. These claims to divine origin during the coronation confirmed eight Brahmins from the Holy Indian city of Varanasi.

The mystery of the Buddha’s head

According to legend, the Burmese swords cut off the heads of the statues of Buddha, but to further humiliate the Thais, the Burmese head buried in the ground, so the Thais went to him. In different churches today you can see many headless Buddha statues. They say that on the territory of the temple Wat Mathat nature itself rebelled against this state of Affairs and the roots of the growing tree made the head of Buddha on the earth’s surface.