The mystery of the cursed gold of Arizona 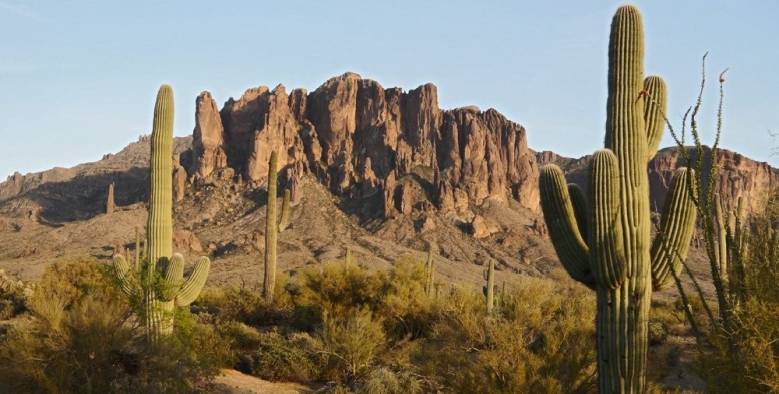 Gold has always been surrounded by myths and legends. Often, it’s just a beautiful fairy tale to attract tourists, but there are legends that have a very real basis.

For example, residents of Phoenix, Arizona, with enviable persistence for many years tells the story of a mysterious gold mine. And with even greater persistence in these godforsaken region have sought and still seek the crowd wanting to get rich.

The researchers believe that the first white man who visited in 1539, these places were a traveler of fray Marcos de Niza. According to legend, de Niza came in order to track down the mysterious Sibol — the Country of the seven cities, the house which was built of pure gold.

Did aristocratic tramp wonderful city, not known to anyone, since all members of the expedition, including the leader, disappeared without a trace. And every year the lists of missing persons only multiplied, but on returning, really the finder of treasures, and the wealthy have not heard one.

No doubt the miners were hurt by someone or something. Many locals believe in the curse of the Apaches imposed on the yellow metal, which now is guarded by the evil mountain spirits, and that in secret caves is the entrance to other dimensions and parallel worlds…

One of the first who found out that actually can hide the abandoned mines, was Thomas Rodes, the closest assistant to the head of the Mormon Church Brigham young — the man who led the community of latter-day saints in the far West. In 1847 in the Great Salt lake, in places of an Indian tribe of Utah, Brigham young founded a colony of Mormons.

It is not excluded that the Indians also recognized in gifted preacher, spiritual leader, because the leader of Balkara told a white colleague about a stash of gold in the Uinta mountains. Anyway, the team decided to pass on the treasures of the Church. To ferry precious cargo from secret places in salt lake city, where the center of the colony, needed a loyal man. They became Thomas Rodis.

The hiding place was an abandoned Spanish mine full of gold nuggets. The Indians themselves did not even come close to her, mindful of the curse of the ancestors. But for Rodica, not too burdened with superstitions (at least Indian), special not working to extract one large ingots, and put him in the van. According to contemporaries, on the first trip Rodia had the two weeks, after which he returned with the loot, amounting after purification from impurities and sixty pounds of pure gold.

In 1848 a Mexican family, Peralta stumbled in the mountains the flooded rock pits, which managed to produce about 10 kg of the precious metal. However, back to Mexico returned only one person from a family, and with empty hands. All the rest were destroyed by the Indians.

In 1860, as told by residents of the city of Phoenix, doctor Thorne cured the ailing leader of the Apaches, who in gratitude allowed his Savior to take from the stash as much gold as he could carry.

The doctor returned to town a rich man, but asking him about the trails leading to the treasures, just shrugged — Indians providently tied his eyes. All immediately rushed in search of gold, but came back with nothing — silent mountains kept secret.

It’s only been ten years, and in Phoenix there were two Jacob: waltz nicknamed the Dutchman and his partner, Weiser. The city quickly spread the rumor about a mysterious map, supposedly given to the Dutchman last of Peralta.

For eight years, the partners produced solar metal seven million dollars. However, to take advantage of the wealth could only waltz, since the second Jacob vanished without a trace in the mountains. The Dutchman swore that his friend was taken away by evil spirits, helping the Apaches.

Approximately twenty years after the death of Dutchman gold took his servant Julia Thomas, organized a new expedition. Despite the advantage, she had the map, seems to be derived from the former owner), kladoiskateli not so lucky, like many others. Losing all people, she returned to Phoenix, where it turned out that lady not only found no gold, but have lost their mind. Julia insisted that her people killed the ghosts of dead miners.

The years went by, the list of dead and missing adventurers continued to grow, but no one else could boast a pocketful of gold. Suddenly, the name of Peralta surfaced again: in 1912, the lawyer Erwin Ruth helped to avoid a very substantial term of imprisonment to one of the descendants of the legendary Mexican, for which he thanked his rescuer, a copy of the old card.

However, the lady herself treasures absolutely not interested, but her son Adolf in 1931 decided to take a chance and use the gift. Attempt to find the coveted mine ended with another tragedy: six months later was found separated from the body is the head of a young man with two bullet holes. Later it was discovered and the body, and next to it are personal belongings of Adolf. No gold, no cards were not among them…

In ten years the sad list of the missing continued a James Crewe. But Barry storm in 1945, was more fortunate: having managed to survive, he said that he saw in the mountains a mysterious killer hunting for gold.

Modern times brought new names: in 2009, in those mountains was killed, the English treasure seeker, Alan Biggles. And in the summer of 2010 the police of the state of Arizona appealed the concerned relatives of the men missing, according to the applicants, a few days ago. No mobile phone, no radio, they did not respond.

The police have taken all possible measures, but search engines are only able to find an empty car that were missing. On questioning about the purpose of the expedition is unknown where the missing Curtis of Merivaara, Malcolm Meeks and Charles Ardina their relatives said that all three arrived from Utah in order to find in the mountains, an abandoned gold mine. When six months later the remains of the men were found, if they didn’t have a single grain of the precious metal…

Every year in the vicinity of Phoenix appear to hundreds of adventurers who dream to get rich at the expense of the accursed gold. Those who are really lucky, get back safely, though with empty pockets and disappointment on their faces. Those from whom fate has turned, stay in the mountains forever.

It is still unknown if these greed of gold, the victims of a mysterious killer mines, or was it Indian spirits punish those who are too close to the gates to another world.