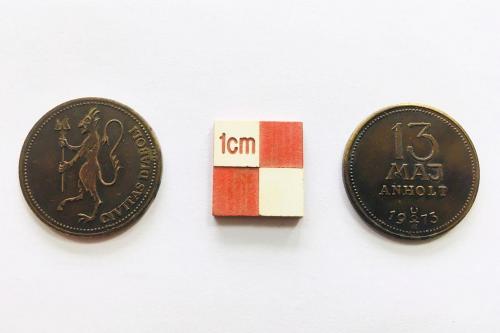 The sleeping heads of people, strange masks, traces of rites and so on – this was all part of the cult. People said that all subjects were part of the rituals. By the way, they were often found hidden in churches and museums.

Excavator leader Bruce Eaton said that no one expected to find strange coins depicting the Devil. On one side was written “country, or citizens, or the devil.” On the other side was the date – March 13, Anholt 1973, that is, the coins are quite young, which causes great concern.

What archaeologists found in the Bath Abbey in British Wessex was part of the strange life of a Danish eccentric who had been the head of an unusual group for 40 years. It is noteworthy that they became known only 10 years after his death.

Archaeologists said that it was a desert island of Anholt off the coast of Denmark. On March 13, 1972, local residents found satanic ritual places with masks, bones, black candles and a human head burnt in the fire. The case was investigated by policemen from the mainland. It turns out that the coins found in Bath Abbey with the devil were the last of those that were hidden in 1973.

After the history of currency fraud, as local media reported, they began to hide in museums and churches. Some finds were with letters that the coin was sent by the priestess of Satan Alice Mandragora. During the study, scientists found that the coins were not a cult, but simply a joke of a local resident – an office clerk from the National Gallery, who died in 2004. This was told to the experts by his daughter. The man literally created a parallel universe, where there was a cult of the Devil.

As a result, scientists remained in shocked admiration for what the local resident had created. His joke gave birth to a whole cycle of 40-year-old rumors and fictions among TV men and newsmen. The man’s daughter stated that her father thought that to come up with a cult that did not exist would be very fun.