The mystery of the dolmens of Antequera 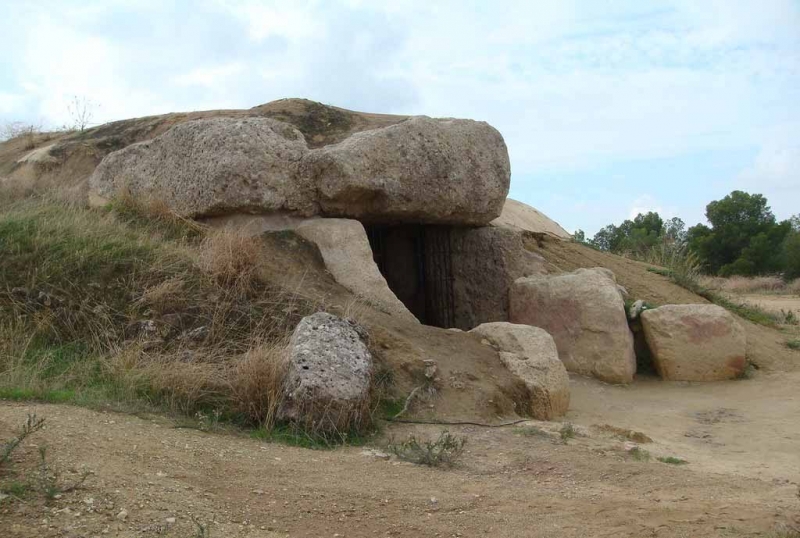 50 km from Malaga, in Antequera, is one of the most important megalithic complexes in Europe: Tombs of Menga, VIERA and El Romeral. Similar structures were found in other provinces of Spain such as Navarre, Galicia and, of course, in Malaga, which is the most important.

All three dolmen radically differ in their shapes and types. The dolmen of VIERA is a typical categories and corridor, varying width, presenting a long corridor formed by huge stone blocks, split stone lintels and laid on top of smaller blocks.

From this dolmen a few meters away, the dolmen of Menga. The entrance to the chamber bottom was drilled in ancient times by the unknown treasure hunters who plundered dolmen. The menga dolmen is known for its huge size.

The third dolmen El Romeral is a large dolmen, consisting of a corridor with two round chambers, covered with a false dome. 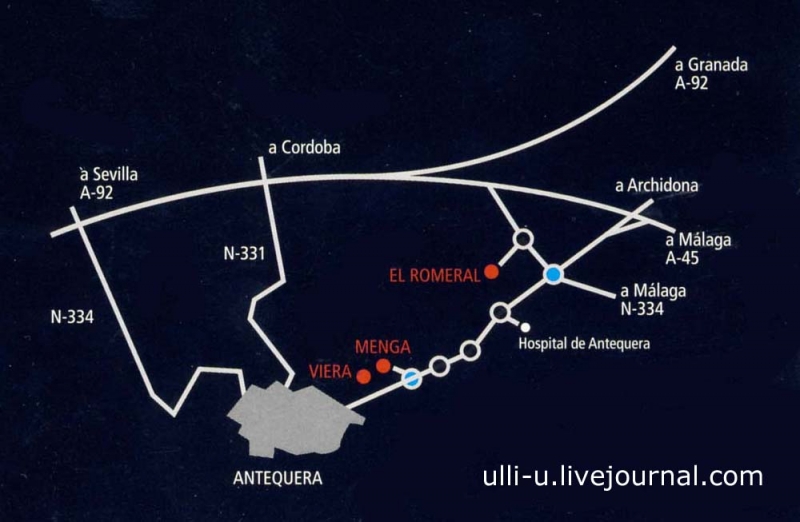 Archaeological Dolmens of Antequera, uniting the three objects of Menga, VIERA and El Romeral in the province of Malaga, considered one of the best and the most famous representatives among the European megaliths. By themselves, the megaliths belong to the early forms of monumental architecture in European History, developing in accordance with the currently available data, since the beginning of the fifth Millennium BC, in the Neolithic period, around 6500 years ago. The emergence in Western Europe of the megalithic monumental architecture is closely related to the first communities of farmers and ranchers. Scientists believe that they used them to establish the existence and indicate the ideological roots of society on earth. The megaliths were used as burial chambers, temples, funeral places and places for mediation ceremonies, often associated with fertility of nature and veneration of ancestors.

The first builders of the megalithic monuments were rural communities appeared in the fertile valley of the Guadalhorce. In the immediate vicinity of the necropolis has identified several settlements of the Neolithic period and bronze age, as for example the cave of the Bull or Bull hill. But it is highly unlikely that any of these communities, consisting of not more than several tens of persons could individually perform a difficult task for the construction of huge megalithic monuments. Most likely, this task required close cooperation between many communities sharing common religious codes and General concepts of tribe or clan.

The dolmens are almost always covered with stones or earth, thus forming a hill. But over thousands of years, these artificial hills were destroyed, and today you can see the frame design. Still never solved why the dolmens were built. One of the common explanation that applies, which States that their main purpose is a graves or sacrificial altars.

Already in 1886 the dolmen de Menga was declared a national monument in 1923 de VIERA. Spike and El Romeral belongs to the National archaeological heritage of art from 1926 To 1931 it was declared historical-artistic monument. Recently, by decree No. 25 dated January 27, 2009, archaeological area of Antequera with its dolmens was included in the General catalogue of Andalusian historical heritage, cultural interest, and is an archaeological area. Control of this area since 1986, handles the administrative group from the Ministry of culture, known as “Archaeological Dolmens of Antequera”.

All three dolmen situated near Antequera, were built and found in different periods of time. A dolmen, known as Menga, was found in the XVII century, but officially added to the list of archaeological monuments in the XIXth century scientist, after whom it got its name, Meng. It was built somewhere in the copper age, in 3800 BC

The dolmen of VIERA, was found by Spanish archaeologists, Antonio and josé VIERA, in whose honor and was named in 1905, Its creation also refers to the bronze age, somewhere in the period from 4000 BC, and the youngest dolmen of El Romeral, built in 2000 BC, was discovered by the brothers.

The Dolmen Of VIERA 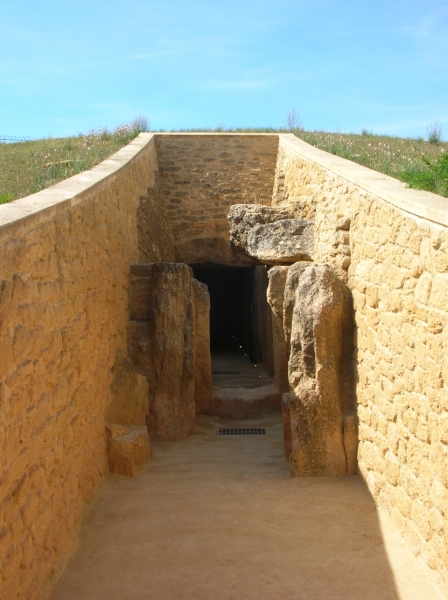 This dolmen is a complex of horizontal and vertical huge stone blocks. It consists of a long corridor, consisting of 29 blocks, which in the end is the gallery of rectangular shape. Its length is 19 m and a height of 2 m. One side of the corridor consists of 15 plates, and the second 14. He laid on top 5 plates. During the excavations there were found ceramics and burial. Covered the dolmen a mound of earth, whose height is 50 m. the Entrance located on the North-East, which ensures the lighting on the solstice. In this one day, solar beam hits in the gallery for a few minutes and illuminates the entire dolmen inside. 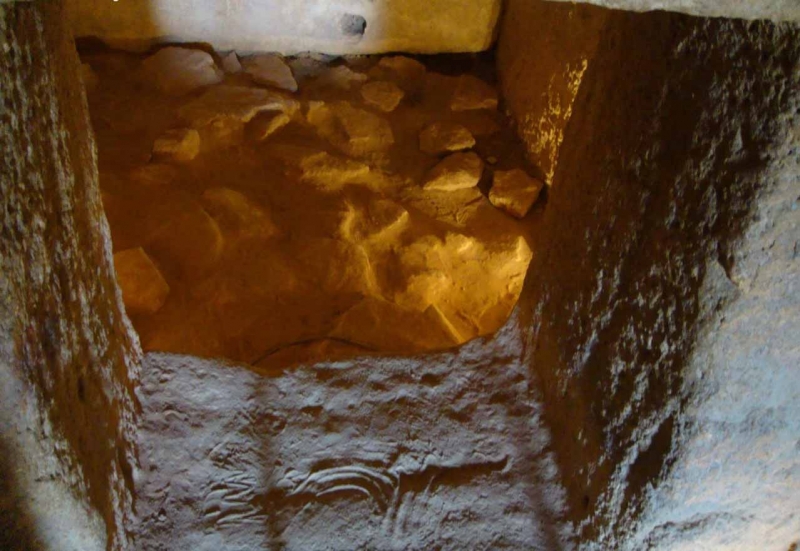 The area where is located the dolmen, today, is the property of the Council for culture of the government of Andalusia. Because of the devastation caused by the time, he was restored, and access to it is moved a little to the South to improve natural light into the internal corridor of the tomb. And after these works the dolmen de VIERA is open for attendance by all residents and visitors one of the most hospitable and Sunny provinces of Spain, Andalusia.

Covered as VIERA dolmens and other stone-earthen mound with a diameter of more than 50 metres and the entrance are in the North-East – to light the graves in one of the days of the solstice. On this day a ray of sunshine penetrates into the gallery and within a few minutes illuminates the tomb. 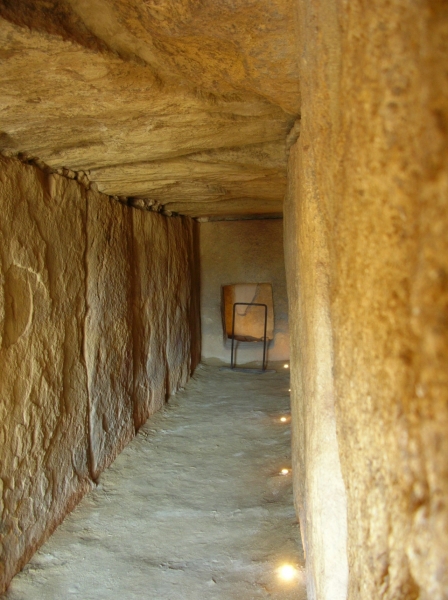 Though most of the dolmens and VIERA are focused on the movement of the Sun and the days either solstice or equinox, but some scientists dispute this theory and believe that the construction of the dolmens is not associated with the movement of the sun. Proof of this can be a dolmen Meng, the output of which is focused on “Rock of love” – La Peña on La Pena de los Enamorados).

To date, the VIERA dolmen is part of the national monuments of Spain. This status he received in 1923, as the dolmen of Menga.

The VIERA dolmen was restored, little has changed – the access to the dolmen moved slightly to the South side, which improves the natural lighting of the corridor of the tomb. And now VIERA is open for visits of guests of the province, Spain tourists and local residents.

The Dolmen Of Menga 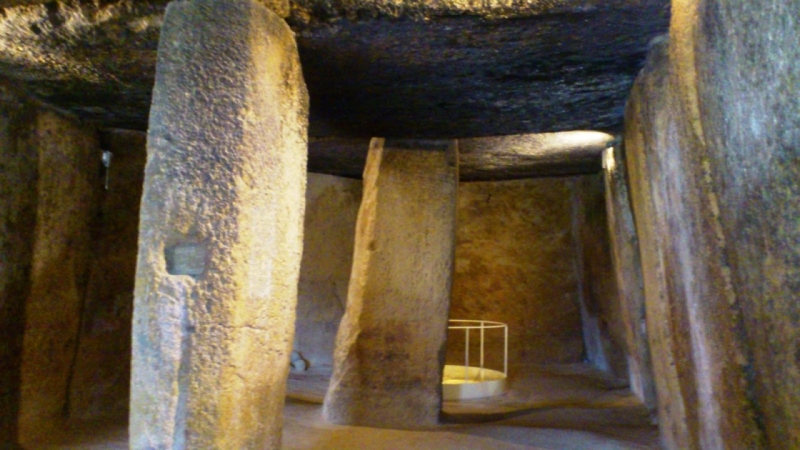 70 m from the dolmen of VIERA is located the dolmen of Menga. Unlike many of dolmens are placed in the direction of motion of the Sun, and closely related to the equinox or solstice, the entrance to the dolmen of VIERA is located in front of the cliff “La Peña” or “Rock of love”. According to legend, is the face of the lover boy, who died because of religious misunderstanding between his Christian family and a Muslim family of his girlfriend. This story is fictitious or not, but if you look closely the shape of the rock resembles a man’s face. 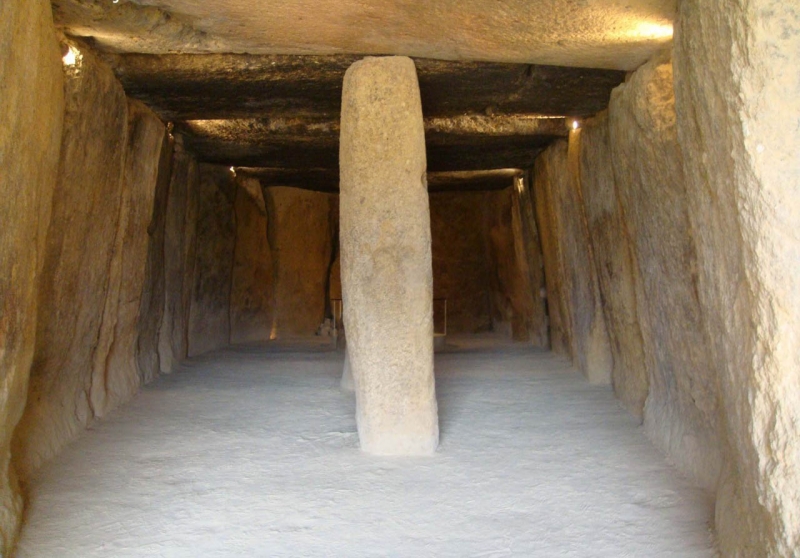 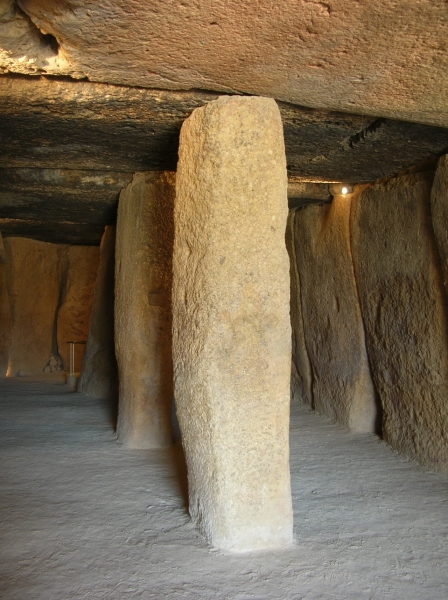 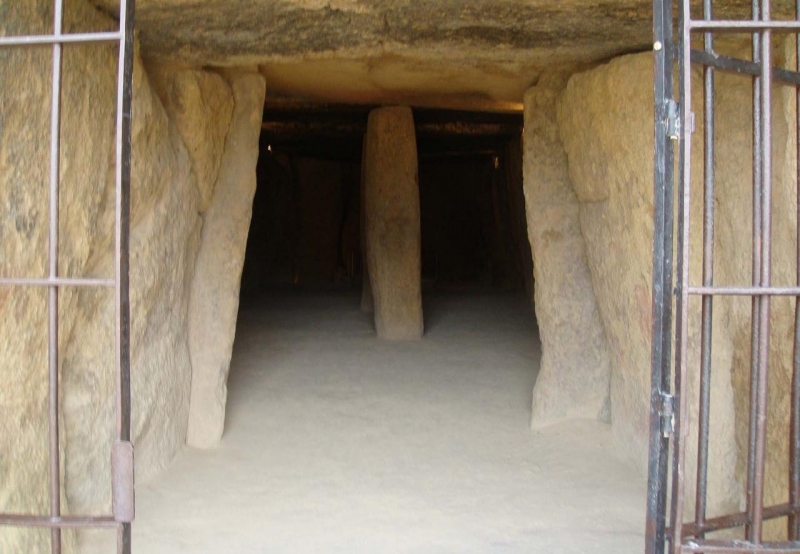 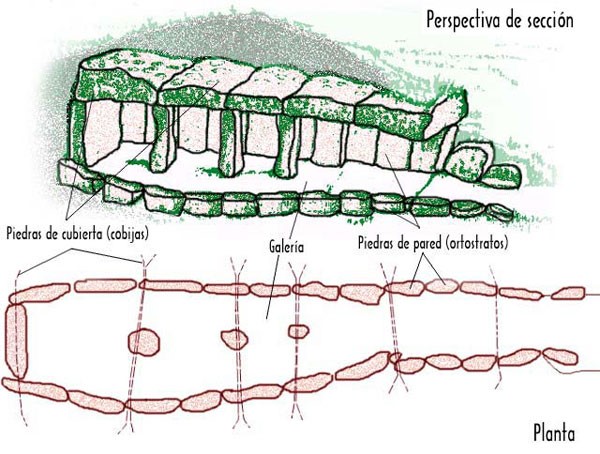 Apart from this its unique features, inside the Menga dolmen in the centre, is a well whose depth is 30 m. the Value of this well scientists are still unable to determine. 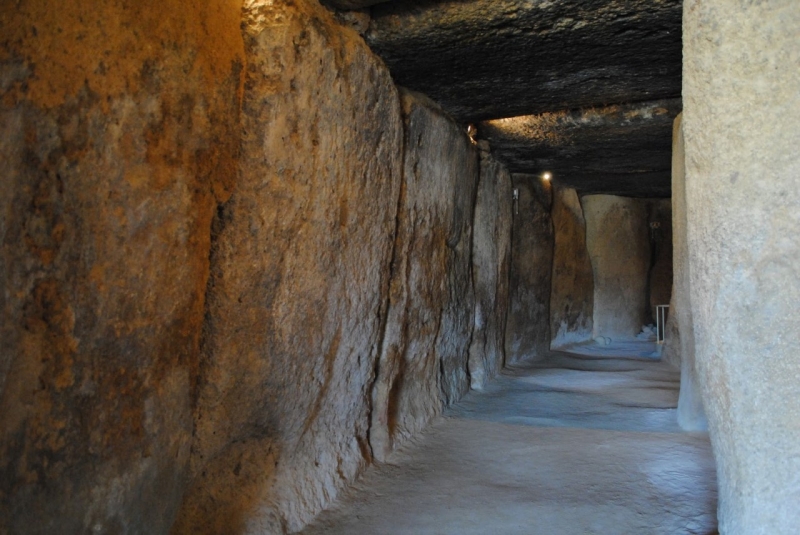 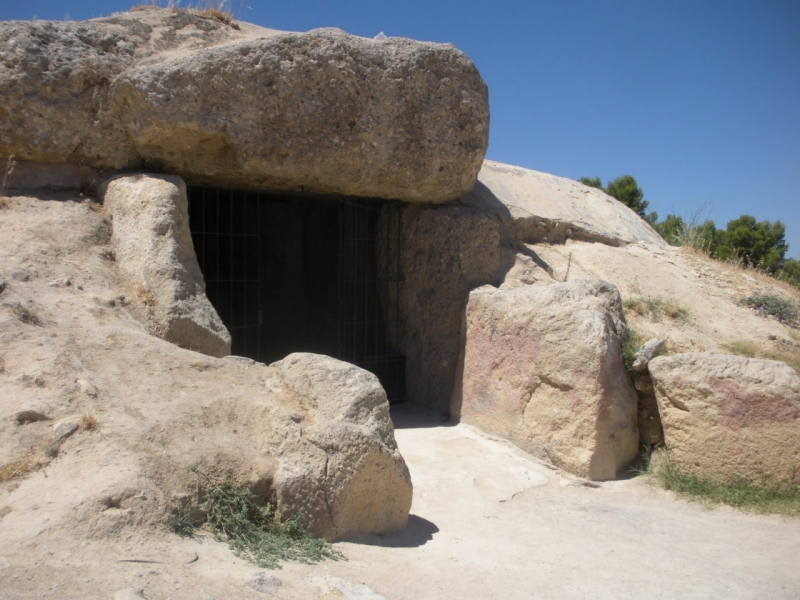 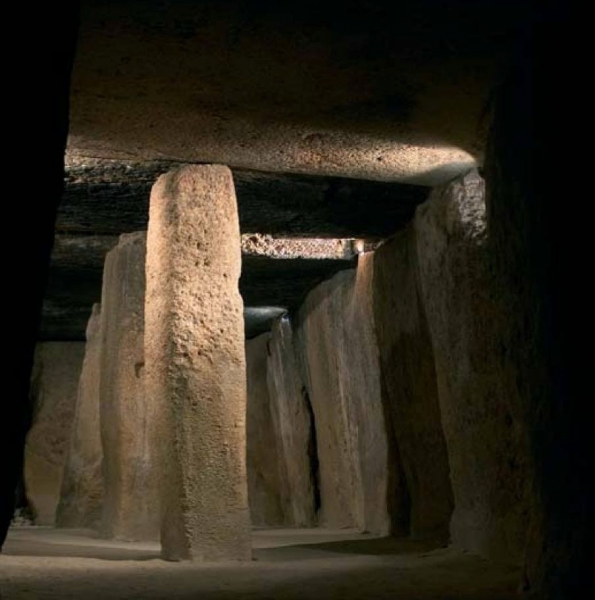 After the Menga dolmen was found, it was discovered human remains, from which was concluded that it was used as a tomb. Also here during the excavations there were found stone and bronze tools. Menga on top covered with a mound of earth, the diameter of which is equal to 50 m. This dolmen is different in size, it more than VIERA, but there is no corridor as such that is made in the form of a gallery. Its height is 6 m and length 27 m. the Weight of the stone block that covers a dolmen, is equal to 180 tons, propped up such a makeshift roof 3 large stone block. 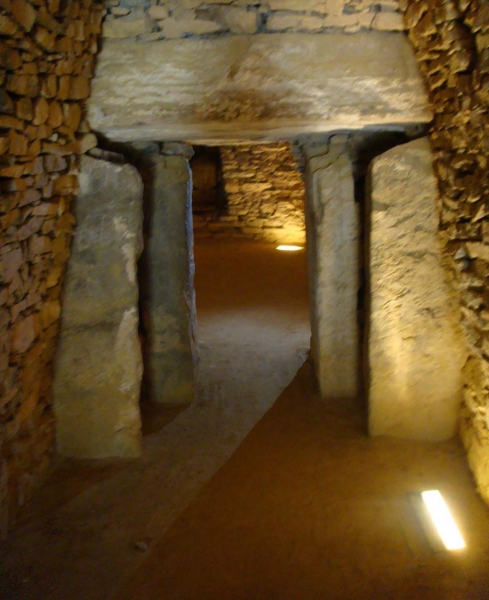 After 4 km from the dolmen of VIERA is the third dolmen of El Romeral, closing the triad of archaeological dolmens of Antequera. Its main difference from the other two is trapezoidal shape. Apparently its builders tried to create it without using the horizontal plate. Also El Romeral is different in two galleries of a round shape. The first gallery was probably used as a tomb, as here were found the man’s remains. 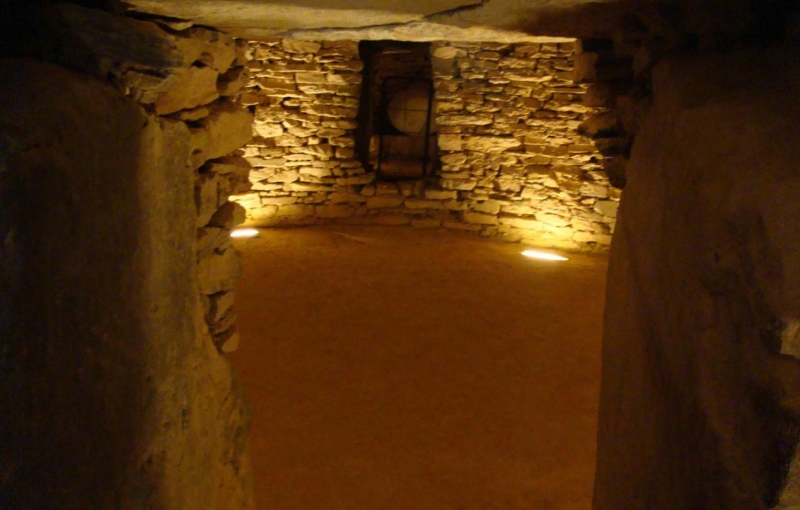 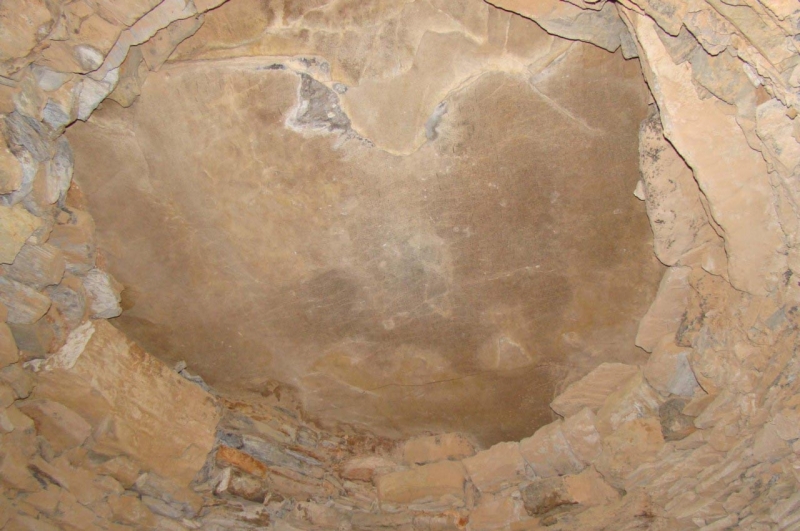 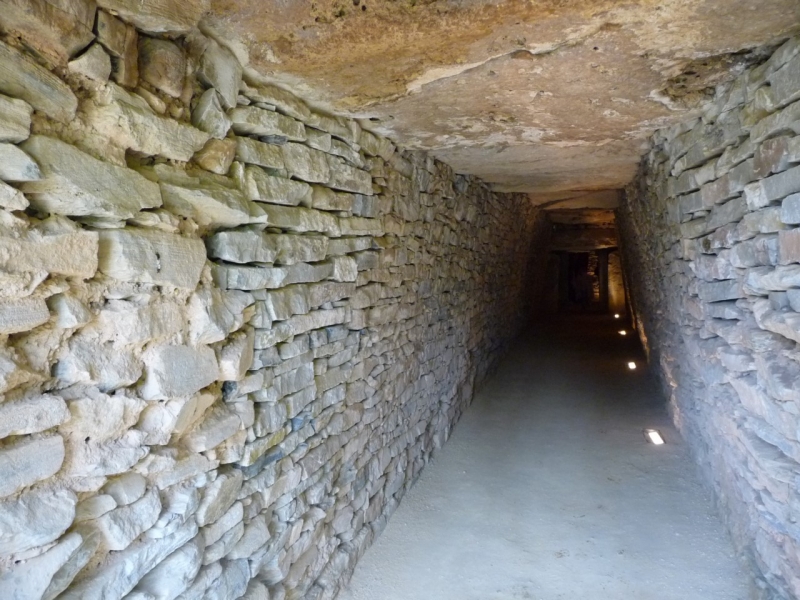 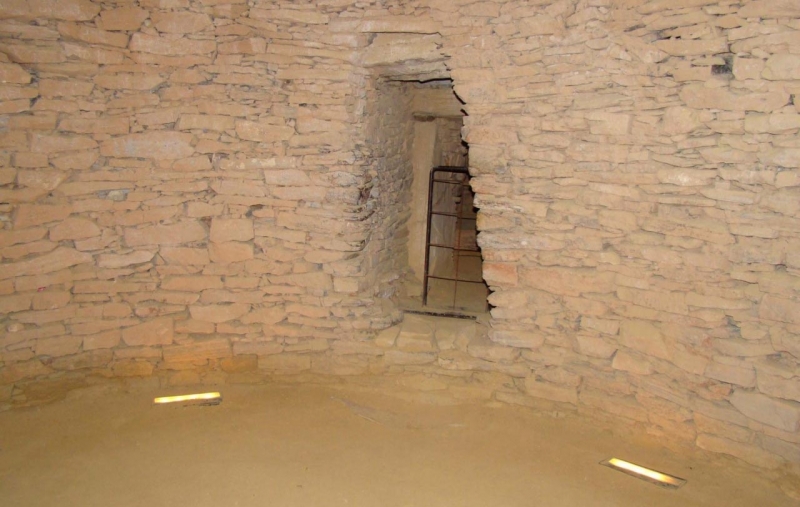 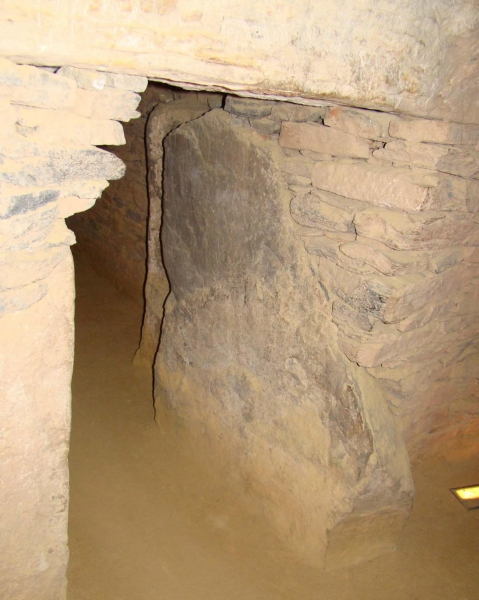 In the second, scientists-archaeologists have found pottery and animal remains. The hill or mound built on top of this dolmen, a lot more than the dolmen of VIERA. The height of the mound reaches 9 m and diameter of 90 m.

Some scientists insist that dolmens could be portals to parallel worlds, acoustic and astronomical structures, the emitters of ultrasonic waves or homes for animals. True or not, anyone can answer this for yourself by visiting these amazing archaeological dolmens of Antequera.