The Mystery of the Footprint on Adam’s Peak 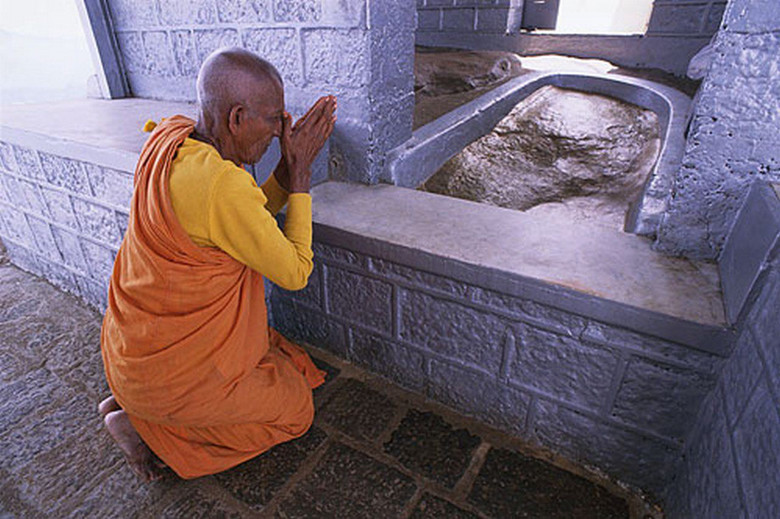 In Sri Lanka (the island of Ceylon), stands a powerful cone-shaped mountain, revered by adherents of all four world religions. The reason for this veneration is the footprint in the rock, which is on the very top.

According to various legends, the whole island, and especially this mountain, is “closest to paradise”. Perhaps it is about the place where man was created?

Mount Adam, which has a height of 2240 meters, refers to the highest mountain peaks of Sri Lanka. In the dry season thousands of pilgrims come here daily: Buddhists, Hindus, Muslims and Christians – and for some time tourists. Since climbing under the scorching rays of the sun is too difficult, excursions to Adam’s peak are made at night. The shortest way is to climb 1 km and overcome 5 thousand steps.

Before climbing to the top after four hours of hard travel, it is recommended to drink hot tea: here the icy wind rages, and the temperature can drop to negative values ​​at night. When you finally reach the upper plateau, you find that a small temple is already full of people gathered here before dawn.

A truly fantastic performance awaits you from the minute to the next: when the first rays cut through the twilight sky, and because of the misty waters of the ocean, the fireball begins to rise, and at that moment a crowd of believers greets him with cries of “Sadhu, sadhu!” (“Holy, holy ! “).

In the west, opposite to the sun, also unfolds a spectacular spectacle – the cone-shaped shadow of Adam’s Peak begins to slowly move apart along the spreading valley below.

But the main purpose of the pilgrims is a deepening in the rock with a length of 160 cm and a width of 75 cm, which has the form of a footprint. Unfortunately, not everyone will be able to see it, because the revered plate, like a sanctuary, is usually covered with handkerchiefs, covered with flowers, and above it rises a small temple.

Pilgrims pass a string, muttering in an undertone of mantra. They kneel down, kiss the stone and throw flowers on the shawl-covered groove.

Hindus believe that the imprint belongs to their god Shiva, who once stopped in these places, and called the mountain “Shiva-Nadi-Padan”. Buddhists also call it “Sri Pada” – “Sacred Footprint”. According to legend, Buddha visited this mountain in 500 BC. The first Buddhist temple was built here already around 300 BC.

Christians and Muslims associate this shrine with the fact that when the exiled Adam descended to earth, he stepped on the top of the mountain. So the people of Sri Lanka consider their homeland to be the closest to paradise land not only because of the magnificent nature.

For Christian Catholics – due to the Portuguese colonial rule in Ceylon in the middle of the 17th century – the imprint has a different meaning. In their opinion, the apostle Thomas, who ascended the mountain during his missionary activity in South Asia, left him.

Pilgrims first appeared here in the XI century. Marco Polo believed that at the top of the mountain is the grave of Adam.

With a deepening in the plate is associated with many ancient legends of various religions. What is his true origin? Maybe it has a natural character and it’s just a “whim of nature”? Or the work of the forger? Is really the imprint of a human foot of this size! In what unprepossessing antiquity the Earth was inhabited by ten-meter giants?

There is an opinion that the footprint on Adam’s Peak is just a copy, and the original in marble is supposedly in a different place. This legend has a parallel – a legend about the imprint of a horse’s hoof Mohammed on a rock in Jerusalem, from where the prophet ascended to heaven.

What is the truth in these legends, religious traditions, interpretations and assumptions? What secret hides the Peak of Adam, where, according to the beliefs of the inhabitants of Sri Lanka, the foot of the first person on the planet Earth set foot?

Unfortunately, scientific research on the holy mountain was not conducted. So – alas! – Today we have to be content with speculative reasoning and conjectures.