The mystery of the lost city in the jungle of Brazil

There is a document in the National Library in Rio de Janeiro called Manuscript 512, which tells about a group of treasure hunters who discovered a lost city in the jungles of Brazil in 1753.

The text is something like a diary in Portuguese and is in a rather unimportant state. Nevertheless, its content is inspired by the search for no more generation of researchers and amateurs – treasure hunters.

The manuscript 512 is perhaps the most famous document of the National Library of Rio de Janeiro and from the point of view of modern Brazilian historiography is “the foundation of the greatest myth of national archeology.” In the XIX-XX centuries. the lost city, described in Manuscript 512, was the subject of heated debates, as well as the relentless searches made by adventurers, scientists, researchers.

The document is written in Portuguese and is entitled “Historical Relation about an Unknown and Large Settlement, Ancient, without Residents, which was discovered in the year 1753” (“Relação histórica de uma occulta e grande povoação antiguissima sem moradores, que se descobriu no anno de 1753” ). The document has 10 pages and is written in the form of an expedition report; while taking into account the nature of the relationship between the author and the addressee, it can also be described as a personal letter.

Percival Harrison Fawcett was one of the most heroic personalities of the 20th century. Outstanding British archaeologist became famous for his expeditions to Latin America. Perhaps, not everyone can, from almost sixty years of life, spend most of his wandering and military service.

Fawcett went on an expedition in 1925 in search of this city (he called his lost city “Z”), which, he believed, was the capital of an ancient civilization created by immigrants from Atlantis. 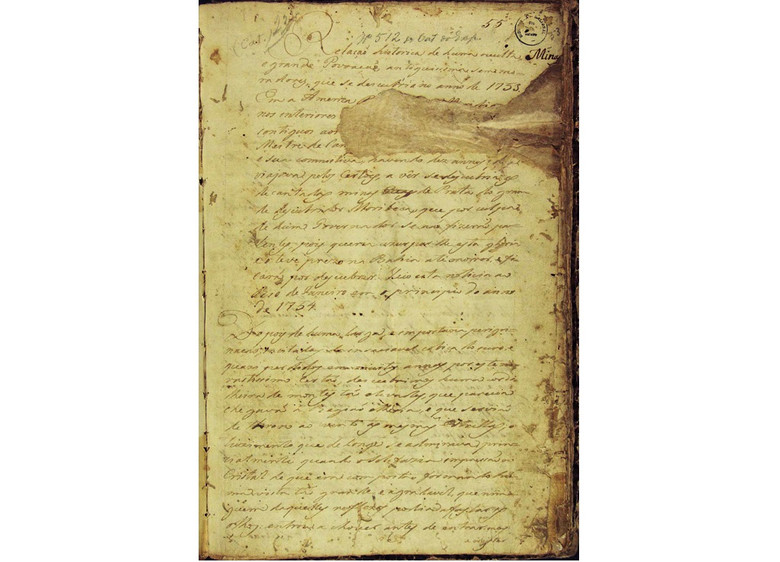 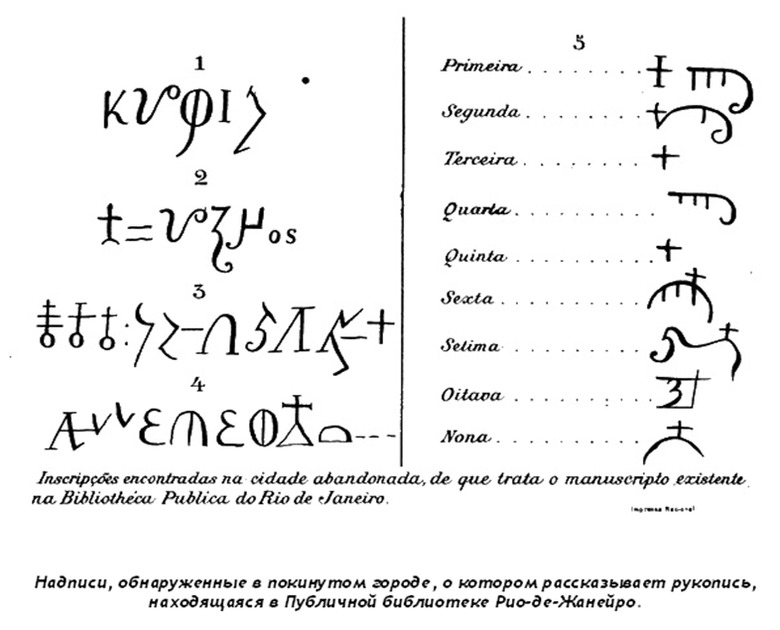 Others, for example, Barry Fell believed that the strange symbols that were seen in the city are the work of the Egyptians of the time of Ptolemy. In addition, there are many evidences of the Roman Empire in the city: the Arch of Constantine, the statue of Augustine. The following are excerpts from this document.

The entire expedition of Fawcett did not return back, and her fate was forever a mystery, which soon overshadowed the very mystery of the lost city.

In the subtitle of the document it is said that a certain group of bandeirants (“hunters for the Indians”) spent 10 years wandering through the internal unexplored areas of Brazil (sertanes) in order to find the legendary “lost Moribec mine”.

The document tells how the detachment saw mountains shining with numerous crystals, which caused astonishment and admiration of people. However, at first they could not find a mountain pass, and they encamped at the foot of the mountain chain. Then one negro, a member of the detachment, after driving a white deer, accidentally discovered a paved road that passed through the mountains.

Going to the top, the bandeirans saw from above a large settlement, which at first sight was taken for one of the cities of the coast of Brazil. Having descended into the valley, they sent scouts to learn more about the settlement and its inhabitants, and waited for them for two days; The curious detail is that at this time they heard the rooster singing, and this made them think that the city was inhabited.

At sunset, they moved into the city, holding their weapons ready. No one caught it or tried to block the way. It turned out that the road was the only way to get into the city. The entrance to the city was a huge arch, on the sides, which were smaller arches. On the top of the main arch there was an inscription that it was impossible to read due to the height of the arch.

Behind the archway was a street with large houses, the entrances of which were made of stone, on which were many different images, darkened from time to time. With caution, they went to some houses, in which there were no traces of furniture or other traces of a man.

In the corners of the square stood obelisks, similar to the Roman ones, which had significant damage. On the right side of the square stood a majestic building, apparently the palace of the lord. On the left side were the ruins of the temple. On the surviving walls were painted frescoes, decorated with gilding, reflecting the life of the gods. Behind the temple, most of the houses were destroyed.

In the corners of the square stood obelisks, similar to the Roman ones, which had significant damage. On the right side of the square stood a majestic building, apparently the palace of the lord. On the left side were the ruins of the temple. On the surviving walls were painted frescoes, decorated with gilding, reflecting the life of the gods. Behind the temple, most of the houses were destroyed.

In front of the ruins of the palace ran a wide and deep river with a beautiful embankment, which in many places was littered with logs and trees brought by the flood. From the river channels and fields, overgrown with beautiful flowers and plants, including rice pouches, on which large flocks of geese were moving, departed.

After leaving the city, they are three days downstream, until they came to a huge waterfall, the noise of the water which was heard for many kilometers. Here they found a lot of ore containing silver and apparently delivered from the mine.

To the east of the waterfall were many large and small caves and pits, of which, apparently, mined ore. In other places there were quarries with large processed stones, on some were inscribed inscriptions, similar to inscriptions on the ruins of the palace and the temple.

At a distance of a gun shot in the middle of the field stood a rural house about 60 meters long with a large porch and stairs of beautiful colored stones leading to a large hall and 15 smaller rooms decorated with beautiful murals and a pool inside.

Further down the river they came upon a place of a large gold vein with traces of gold mining.

After a few days’ journey the expedition was divided into two groups. One of them downstream met two white people by canoe. They had long hair and were dressed in European style. One of them, named Joao Antonio, showed them a gold coin found in the ruins of a rural house.

The coin was quite large and it depicted the figure of a man on his knees, and on the other side a bow with an arrow and a crown. According to Antonio, he found a coin in the ruins of the house, which was apparently destroyed by an earthquake that forced residents to leave the city and the surrounding area.

Part of the pages of the manuscript can not be read at all, including a description of how to get to this city because of the poor state of the Manuscript 512 sheets. The author of this diary swears to keep it a secret and especially information about the location of abandoned silver and gold mines and gold-bearing veins on the river.

At the very end of the document is also an image of nine signs on stone slabs (as you might guess, at the entrance to the caves, this part of the manuscript was also damaged). As noted by the researchers, these signs most resemble the shape of the letters of the Greek or Phoenician alphabet (sometimes also Arabic numerals).