The mystery of the lost island of Bermeja 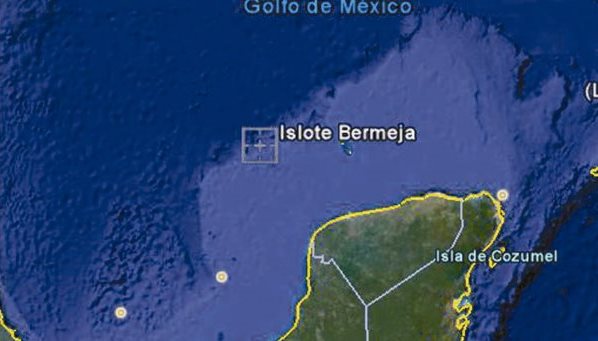 The world around us is constantly changing. But we are perplexed at the idea that existed yesterday on a map a geographical object can suddenly disappear. Meanwhile, this is not uncommon. And often appear out of nothingness and disappear back island…

Until recently the island Bermeja was in the Gulf of Mexico, 200 kilometres off the Northwest coast of the Yucatan Peninsula and 150 km from the Atoll Scorpio. Its exact geographical coordinates are: 22 degrees 33 minutes North latitude and 91 degrees 22 minutes West longitude. Anyway, it is here that the island of Bermeja depicted by cartographers since the sixteenth century.

Map of the Portuguese sailors

First this island with an area of 80 square kilometers was opened by Portuguese navigators. On a Portuguese map of 1535, which is stored in the State archive of Florence, Bermeja already there. It is the report of Alonso de Santa Cruz Madrid court from 1539 under the name “Yucatan and the adjacent Islands”. There is a description of the island of Bermeja in the book Seville the sailor Alonso de Chavez “Mirror of navigation” from the year 1540.

There is an island Bermeja and on the map of Sebastian Cabot, printed in 1544 in Antwerp. On her island Bermeja is depicted along with the Islands Triangle, arena, Negrillo, Arrecife, it features a restaurant. The whole of the seventeenth and the greater part of the eighteenth century the image of Bermei did not undergo any changes. Quite in accord with ancient maps of the Mexican cartographers placed the Bermeja at the address and in the XX century.

However, in 1997 there was an incident. The Spanish research vessel no trace of the island is not found. Moreover, the question of loss of island of Bermeja engaged in the national University of Mexico. In 2009 the island was sent another research ship. Alas! Scientists have been unable to find neither the island nor even a trace of him.

Bermeja, of course, not the only island that suddenly went gone. A similar story happened with sandy island in the coral sea between New Caledonia and Australia. However, the island is sandy, representing a elongated sand spit, there was not on all maps. He was depicted in almost all ancient maps, and it was believed that it was first noticed and described by the famous captain James cook in 1774.

Even after 100 years the island has seen from an English whaling ship. In 1908, with precise geographic coordinates, he was in report of the British Admiralty. Because the island was small and uninhabited, it is not enough who’d be interested in, but its shape properly wandered from map to map, while in 2012 the island sandy went Australian marine geologists and oceanographers. And they were unpleasantly surprised by the fact that the island is not found. Instead of the island below the boat lay the deep sea with a depth of 1400 meters!

After that, the researchers wondered: could the island disappear without a trace or simply never existed? The fact that it did not exist a couple of decades ago, it became clear pretty quickly. In 1979, the sandy island was removed from their cards French hydrographers, and in 1985, the same was made by Australian scientists.

So the island remained only on digital maps, which are traditionally correlated with the “paper”. The island itself disappeared. Or even could exist only in the imagination of those who watched. 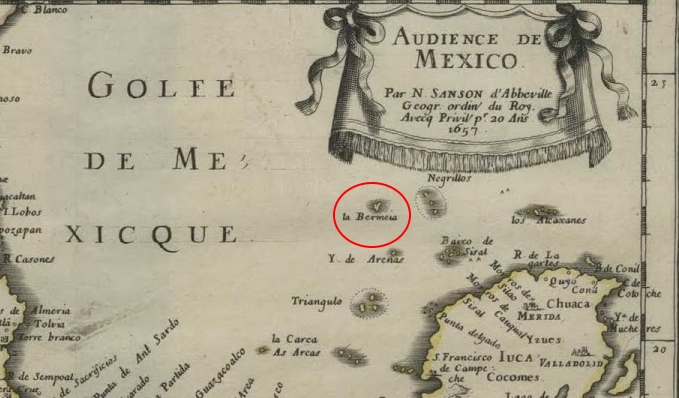 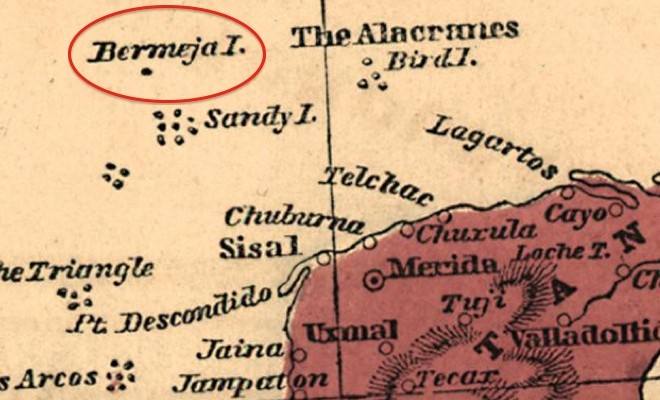 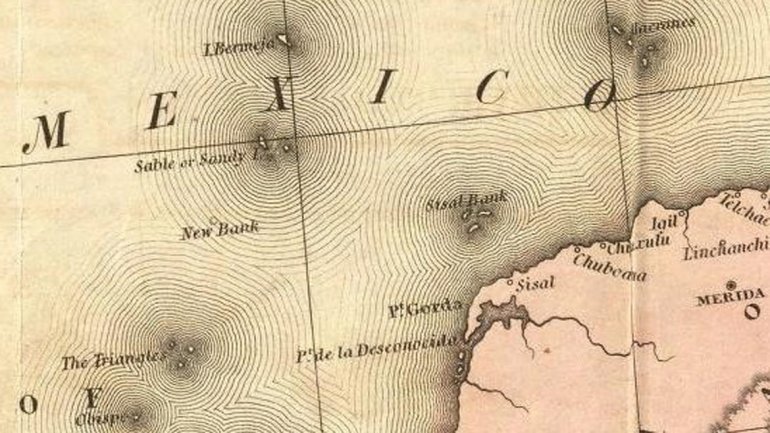 And off the coast of Japan, near Hiroshima, there was an island, Haboro. For example, small but quite noticeable: 120 meters in length and almost 22 meters in height. On the island landed the fishermen, it was removed by tourists. The photographs of half a century ago can be considered two rocky peaks, one of which is covered with vegetation. However, eight years ago from the island leaving only a pathetic rock -almost all of it went under water.

If the cause of the disappearance of sandy is not known, the reason for the disappearance of the island, Haboro absolutely clear: it… ate. And made this tiny marine crustaceans-isopods, which lay their eggs in cracks of rocks and year after year, tirelessly destroying the stone, which are composed of Islands. The island of Haboro melted and melted until it was just a small pile of stones.

Marine crustaceans are not the only residents of the underwater world, which “eat” the Islands. Many coral islets become victims of other inhabitants of the ocean – starfish “crown of thorns”. Especially a lot of coral reefs and islets died off the coast of Australia, where these sea stars is firmly established.

But it happens that the island no one eats and they do pop up and then sink again. It happened with one island in the Mediterranean sea. After less than a month after a powerful earthquake off the coast of Sicily, in July of 1831 the Western Cape “smoke and fire” a tiny piece of land, which began to grow by leaps and bounds.

In mid-August, he had already risen above sea level by 65 meters and had a circumference of more than 3 kilometers. Land on the baby immediately began an international hunt. The first landed on the island the British captain and hoisted the flag of their country. In honor of his Admiral, the British named the island Graham land.

Then landed a Sicilian Professor and named the island in honor of the king of the two Sicilies by Ferdinandea. They were followed by the Frenchman, who hoisted the French flag and gave the island the name Julia – in honor of July. Soon the three names, he added another half a dozen. They began to argue who rightfully owns this land.

But the controversy was in vain: by the end of that year, Graham (aka Ferdinandea, Julia, Hodem, Corrao, Nerita, the adorable Sakha) took and went under water! The top, which is so pleasing to the sight, turned into a sharp treacherous reef.

And these days due to the gradual sea-level rise, the fate of this volcanic island repeat quite stable before, and even the once populated – for example, five of the Solomon Islands Rapita, Cala, Reana, Sales, Ka-Katina and another six are in line for extinction.

Maybe with Bermea was one of these stories?

Bermeja could disappear the same way as sandy. The first witnesses described the Bermeja as a flaming red and the island, so she could have a volcanic origin. And Islands of this type are easily born, easily die. Usually their death is not delayed for centuries…

The Bermeja could eat. However, research vessels are not found at the bottom of any trace of the island. No rock remains, no ruined stones, nothing at all. Only the bottom of the sea.

Bermeja neither disappeared nor lost. Researchers quite seriously say that it had never existed. The same thing, as you know, talking about the island of sandy. Is there however reasons to think so? Yes, there is. At the end of the XVIII century, this thought came cartographer of New Spain to the North of the island Arena not depicted nothing more.

The researcher Ciriaco Ceballos, conducting cartographic surveys, have not found Bermei or Not-Grillo. The errors of the previous mappers, he explained simply: water in the Gulf and turbulent because of the many reefs swimming, especially on the boats of the XVI century, was very dangerous.

It is not surprising that the sailors tried to keep the deep waters and in no hurry to explore the island. And in the testimony and the observations of so easy to get wrong. But after the announcement of Mexico’s independence, this view was swept away and forgotten. For mapping of the Gulf began to use the cards where Bermeja was depicted. And the presence or absence of Islands and nobody has never been tested.

However, besides the obvious explanation there is a whole conspiracy.

Its essence is that of Bermeja is one of the sample points, which builds up sea border between Mexico and the United States. In this version, the Americans, of course, profitable to no Bermei did not exist, because then oil and gas fields in the Gulf of Mexico depart not Mexico, and the United States.

And supposedly the Americans took the island, which should not exist is very simple: they blew it up. And did it not even yesterday, and in the 70-ies of the last century, when images from space began to show in place of Bermei solid water surface…