The mystery of the Tunguska meteorite 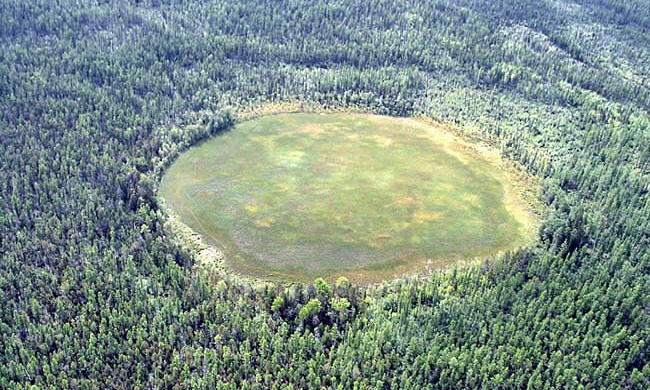 After more than a hundred years, scientists have been unable to unravel the mystery of this mysterious phenomenon.

The explosion occurred over the taiga near the stony Tunguska river. It was heard in a radius of 100 kilometers. He was accompanied by the pillar of flame and a giant smoke cloud. According to eyewitnesses, before the explosion over the Tungus taiga flashed blindingly bright body, eclipsing the sunlight.

The explosion was recorded by seismographs of Irkutsk Observatory at seven o’clock in the morning of 30 June 1908. At first, the experts thought it was an earthquake, because the Irkutsk Observatory located near mountain ranges, and such things happen here quite often. However, this time recording seismograph had a very strange look. The characteristic zigzags repeated longer than usual, plus there were a few confusing extra twists.

The Observatory staff immediately sent out messages to local reporters to learn from them about the earthquake. The answers were totally unexpected. Most of the correspondents claimed that the earthquake did not exist, but was a very loud sound like thunder or fire.

One of the correspondents wrote that about eight o’clock in the morning he heard the thunder, which became stronger and resembled gunpowder explosion, which then escalated into a Bang, and then the buzz. After 20 minutes the thunder stopped. The author also reported that one of his neighbors saw a flying star with a fiery tail, which like fell into the water.

The employee of a meteorological station in Kirenske seeing the extra line on the barograph tape, decided to ask the locals. “They said at the beginning of eighth in the North-West appeared the pillar of fire in the form of a spear. When the pillar disappeared, I heard five strong blows, like a cannon, then this place seemed a thick cloud. 15 minutes later we heard again the same shock, 15 minutes later, the same” — he wrote in his memoirs.

Later it turned out that the shaking ground was recorded by seismic stations in various parts of the globe, including in the Western hemisphere. For several days in the territory from the Atlantic to Central Siberia, there was intense glow of the sky.

The first expedition to the crash site, sent nearly 20 years after the incident. It was headed by Leonid Alekseevich Kulik, who showed a particular interest in the study of the strange celestial body, called “Tunguska meteorite”. The researchers found that in the place of the alleged fall of a meteorite knocked forest in a large area. The strangest thing was that in a place that was supposed to be the epicenter of the explosion, the forest was left standing, and traces of meteor crater was absent.

The next few expeditions Kulik since 1927 to 1939, also found no evidence of a meteorite, although the facts of the disaster were visible very well. Kulik tried to find remnants of the meteorite, organized the aerial photographs of the crash site, gathered information from locals, but nothing associated with the meteorite was found.

Calculations showed that the fall of “Tunguska meteorite” would lead to the formation of the crater depth of 200 meters and with a radius of 1000 meters. Such a hole is easy to detect now. In addition, the epicenter of the explosion should be more widespread destruction, but the tree survived. And the branches they were broken off as if the blast hit them from above.

At first, Kulik took over the remnants of the crater hummocky peat bog and began excavations there. However, no excavation or drilling of craters produced no results. The meteorite disappeared. And the swamp was a karst funnel. Research Sandpiper was interrupted in 1941 due to the war, but he remained a supporter of the hypothesis about a meteor the nature of the Tunguska phenomenon.

However, this research has not ended. After the war began and the other expeditions to the area of fall of “Tunguska meteorite”. The researchers expressed more than a hundred different hypotheses of what happened — the explosion of swamp gas before the crash of an alien spaceship. However, none of them can fully explain all the features of the disaster.

Hypotheses even had to categorize by types: man-made, associated with antimatter, geophysical, meteoritic, synthetic, and religious. The most common version is the fall to Earth core or fragment of a comet. Comets consist mainly of ice and frozen gas with small patches of solid substances, which distinguishes them from all solid asteroids.

If the nucleus of the comet raced at supersonic speed, when his flight was bound to arise a ballistic wave that felled trees and made a noise like thunder. This hypothesis well explains the absence of craters and shrapnel — ice – is warmed up and at a certain height instantly evaporated. Because of this, allocating a large amount of energy comparable to the energy of a nuclear explosion. This explanation was then accepted quite a large number of astronomers.

In 1945, the Soviet writer Aleksandr Kazantsev suggested that the “Tunguska meteorite” was a spacecraft of extraterrestrial civilizations, which crashed. However, this version was immediately rejected by astronomers and specialists in meteoritics. In the journal “Science and life” came up “a scathing article, in which scientists rejected the alien theory of the “Tunguska phenomenon” and claimed that the meteor crater will be found soon.

One of the alternative versions of the “Tunguska phenomenon” is an experiment of the famous physicist Nikola Tesla. According to this hypothesis, June 30, 1908 Tesla did for the transfer of energy through the air. This version is supported by the fact that several months before the explosion Tesla announced the intention to illuminate the road to the North pole expedition of the famous traveler Robert Peary.

Also in favor of the version “Tesla” is the fact that the physicist asked for the card “the least inhabited parts of Siberia. The records preserved in the journal of the library of Congress. Also curious that the people of Canada and Northern Europe were seen in the sky silver clouds that pulsed. The same was observed by the witnesses of the experiments Tesla in his laboratory in Colorado springs.

Tunguska catastrophe still continues to excite scientists. Some researchers believe that science has faced with some unknown person a unique phenomenon, which still need to be solved. A key element in the study of the nature of the Tunguska meteorite is the question of how was its material composition. However, it is still a substance that could guaranteed to be identified with the substance of the “Tunguska meteorite”, was not found.