Last week, the journal Science Advance published the results of one of the most extensive studies of the Earth’s climate. An international team of 64 scientists led by the National Institute of Polar Research of the University of Tokyo (Japan) analyzed the changes in the values ​​of atmospheric temperature and other indicators of the planet’s climate for the last 720 thousand years. The basis for the analysis was the ice cores extracted from the top of the ice shield in the north of Antarctica – the Fuji Dome, or the Valkyrie Dome – from 2003 to 2007. In addition, to find out the causes of climate change, scientists used computer modeling.

The main conclusion of the study is the following: during glacial periods, the climate on the planet was extremely unstable and very variable. However, this applies only to specific time intervals, when the air temperature values ​​fluctuated around average: in too cold and too warm periods the climate was stable. The cause of climate instability in certain periods was a global cooling caused by an insufficient greenhouse effect. 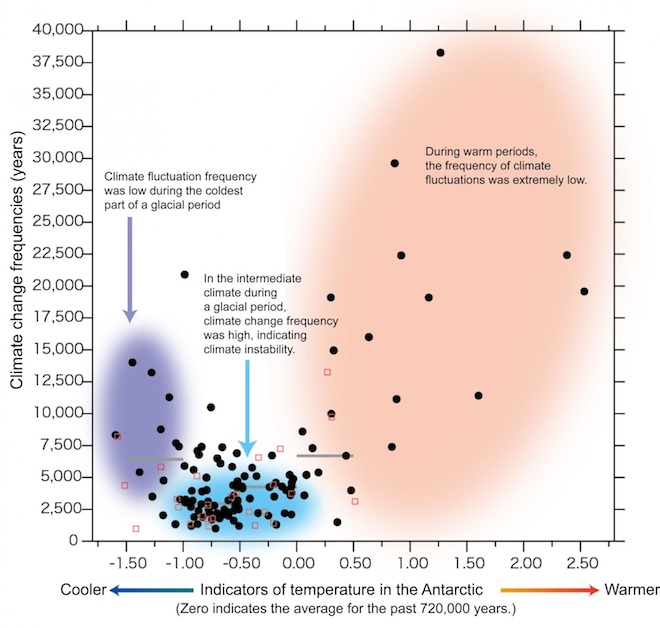 Dependence of the frequency of climate change and temperature

Climate instability and frequent natural disasters are one of the main threats to life on Earth. To model the consequences of the current climate instability and its main cause, global warming, it is useful to study the periods of development of our planet when the climate was also changeable. As scientists learned, the main reason for the frequent climate variability in the past was the high susceptibility of the deep ocean currents of the Atlantic Ocean to the carbon dioxide content of the atmosphere. During the global cold snap, the concentration of this gas was sharply reduced.

Direct climate dependence on the concentration of atmospheric carbon dioxide is an important discovery, since it was previously believed that climatic instability is determined mainly by the instability of continental ice sheets in the Northern Hemisphere. This indicates an even greater danger of increasing the level of carbon dioxide in the atmosphere due to industrial emissions and exhaust gas in our time.